The Castellania is a square two storey building that stands on the main town square of Rhodes, the Knight's Magna et Communis Platea. The consensus among academics is that the Castellania was the courthouse of the Order, but dissenting voices have suggested that it may have been the Mercantile Court, the Basilica Mercatorum. Whatever the building's original use, even in its present condition, the Castellania remains one of  Rhodes most important civil monuments. 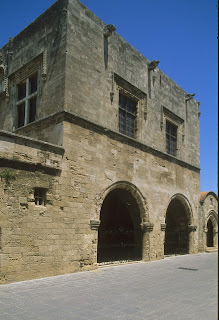 Most of the upper storey and part of the ground floor are now in ruins. The building was restored by the Italians occupiers after the upper storey had been used as a mosque with a fish market on the ground floor. The upper hall, above an arcaded loggia is reached by an external flight of stone steps.The entrance to the hall, at the top of the stairs, has a fine marble surround in the Renaissance style . The lintel above the door depit an angel holding the arms of the Order in his left hand and those of Grand Master d'Amboise in his right. The Renaissance style of the door way contrasts with the Gothic frame on the adjoining wall  that surrounds the arms of Grand Master d'Amboise and the date 1507. Carved  beneath the frame are the arms of Fra. Jacques d'Aymer de la Chevalerie.  There is an elegant window on the upper storey divided into four panels by a white marble cross decorated with fleur de lys carved in relief. At the centre of the cross is the monogram Jhs (Jesus Hominum Salvator) On the south front of the building  are three splendid water spouts in the form of crocodiles. 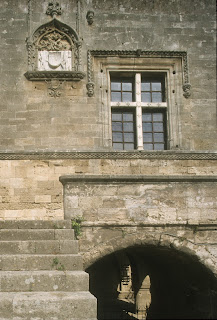 Inside the hall is a magnificent rare survival, a virtually intact early 16th century painted ceiling. 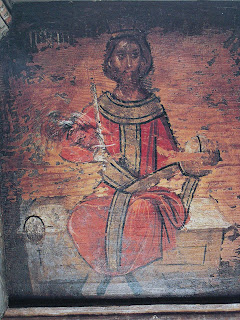 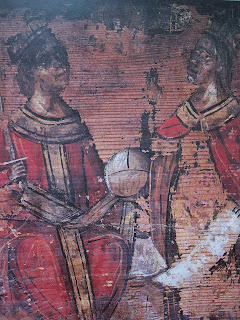 While the square, the Magna et Communis Platea was the centre of commercial activity in the town it was also used for public ceremonial. This was where the Ottoman Prince Zizim was received by Grand Master d'Aubusson on his triumphal entry into Rhodes in 1482. In 1522 the square was where the Greek Metropolitan attempted to raise morale with a speech to the assembled populace from the Castellania balcony and where he showed them the icon of Our Lady of Philermos. 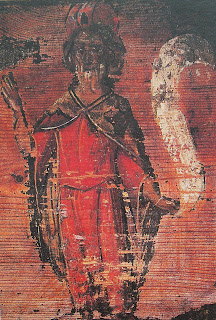