The preceptory of Balantrodoch was the principal house of the Order of the Temple in Scotland. It is eleven miles south of Edinburgh on the wooded banks of the river South Esk. The original church had a round nave, like so many Templar churches in imitation of the Church of the Holy Sepulchre in Jerusalem. There would also once have been a full range of domestic and administrative buildings, none of which have survived.

The Templars settled at Balantrondoch  some time after Hughues de Payens came to Scotland and had met David I on his tour of European powers. He was  gathering  support for the expansion of the original band of nine knights into an international Order. While there is no clear evidence, it does seem likely that King David himself made the original grant of Balantrodoch to the fledgling Order. From here the Templars  administered the extensive properties donated by the faithful across Scotland. 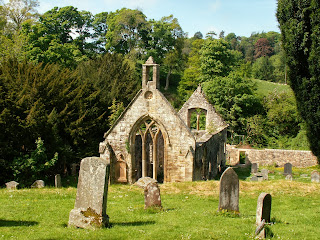 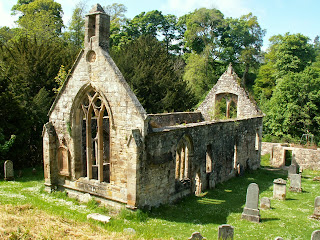 In the 15th Century the Preceptor Fra.William Knollis obtained an act of parliament changing the name 'Temple' to the 'Barony of St. John.' But the name was not accepted by the locals who always called it simply 'Temple'. The Temple remained in the hands of the Hospitallers of St. John until 1535 when they, also, lost control due to Henry VIII of England's Act of Reformation. The chapel became the area's Protestant church and in 1618 the name 'Temple' became formally applied to the village. The building was in constant use as the parish church until 1840 after which it was left to fall into ruin.

It is curious that this picturesque chapel in its wooded valley is so little known compared to another village only a few miles away, Roslin. That is of course due to the Rosslyn chapel and all the fanciful stories that surround it.
Posted by Jimmy Graham at 10:20