In 1104, Baldwin I, King of Jerusalem recognized and confirmed the Brotherhood of the Hospitallers and in 1107 by charter gave them land on Mount Tabor. Pope Paschal II sanctioned the constitution of the Hospitallers by a Bull in 1113. The Bull names a Brother Gerard as the founder of the Hospital which was dedicated to St. John the Baptist. 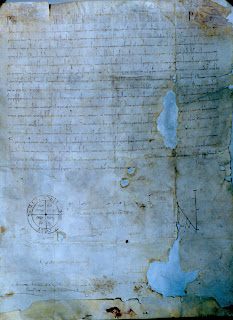 There had almost certainly been a hospital  in Jerusalem, catering to the needs of western pilgrims,  long before the Latin conquest of the city at the end of the First Crusade.

The real significance of the Bull, Pie postulatio voluntatis was the freedom that it gave the to Hospital from external  supervision. A priceless exemption that placed it outside the Church hierarchy and left it free  from obedience to the Patriarch of Jerusalem, the senior churchman in the Crusader States.

So it was that the Hospital of St John was the first of the great independent Orders of the medieval Church. Their lead was soon  followed by the Cistercians, by  the Templar's and by many others.

Godfrey de Bouillon, the conqueror of Jerusalem had endowed the Hospital of St. John with its first gifts of land, his example swiftly followed by other powerful magnates.  Soon the Hospital owned rich properties not only in the Kingdom of Jerusalem and the other Crusader States, but also in all the countries of Western Europe.

By the time of the Bull the Hospital also had seven smaller hospices in Europe, at convenient places from where pilgrims could embark for the Holy Land, by sea. At Bari, Otranto, Taranto, Pisa, Asti and Saint-Gilles. Until then pilgrimages had been made overland  to Constantinople and then on the old Roman roads across Anatolia and then south through Syria.

Pope Pascal's Bull belongs to the National Library of Malta at Valletta. This extraordinary piece of parchment, written on in a meticulous hand by an anonymous member of the Roman Curia is an astonishing historical document. (Even if the seal is missing.) It is surely the most important piece of treasure anywhere that pertains to the Order of St. John. It is the record of  the Order's foundation in 1113, an organization that exists to this day.

Posted by Jimmy Graham at 12:59 No comments: