The Norman House, formerly known as Palazzo Falzon was built at the end of the 15th century in the Siculo-Norman style by the Aragonese Vice-Admiral Falzon. 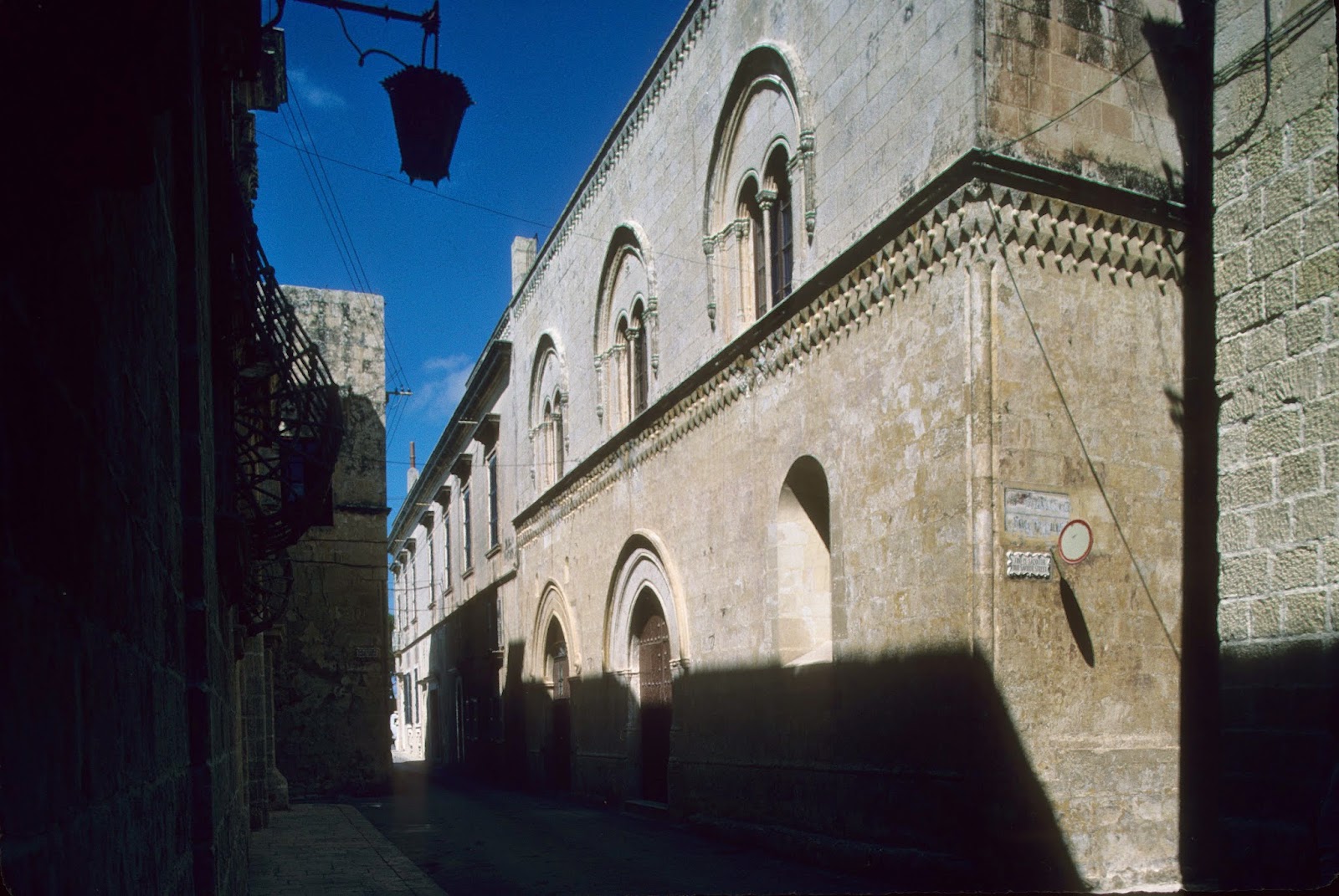 Although the Norman House is of a much later period than the Palazzo Santa Sofia (1233) nearby, the string course is identical and the decorated double windows are magnificent. Their only equivalents are said to be found only in Sicily and Southern Italy. 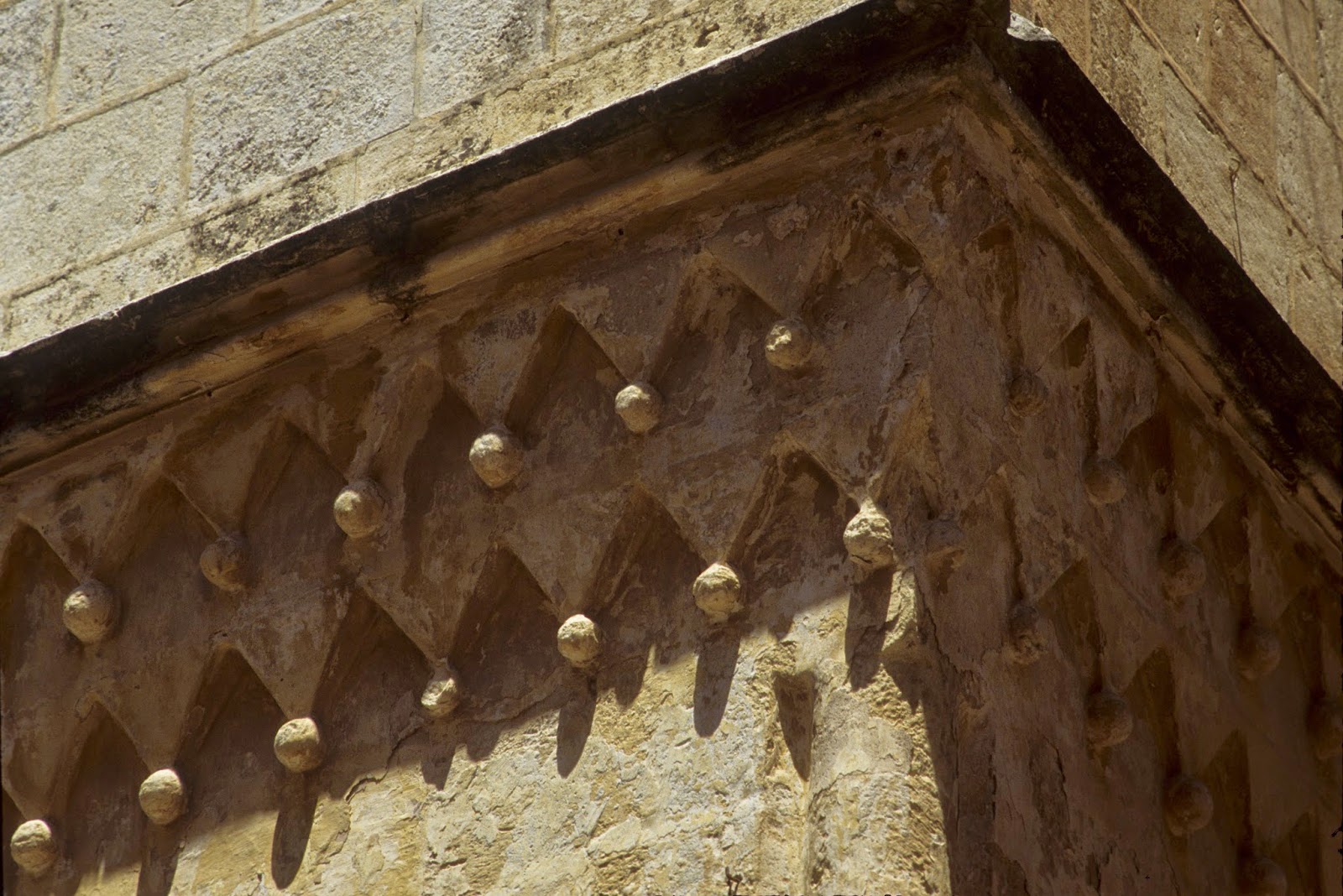 This is the palace where Grand Master L'Isle-Adam was received and stayed two days  after his ceremonial reception and state entry into Mdina in 1530.

The Norman House contains paintings of well-known masters, glass and silver, plate, pharmacy jars,  furniture and a collection of Maltese silver and gold objects, as well as a Library of extensive "Melitensia". 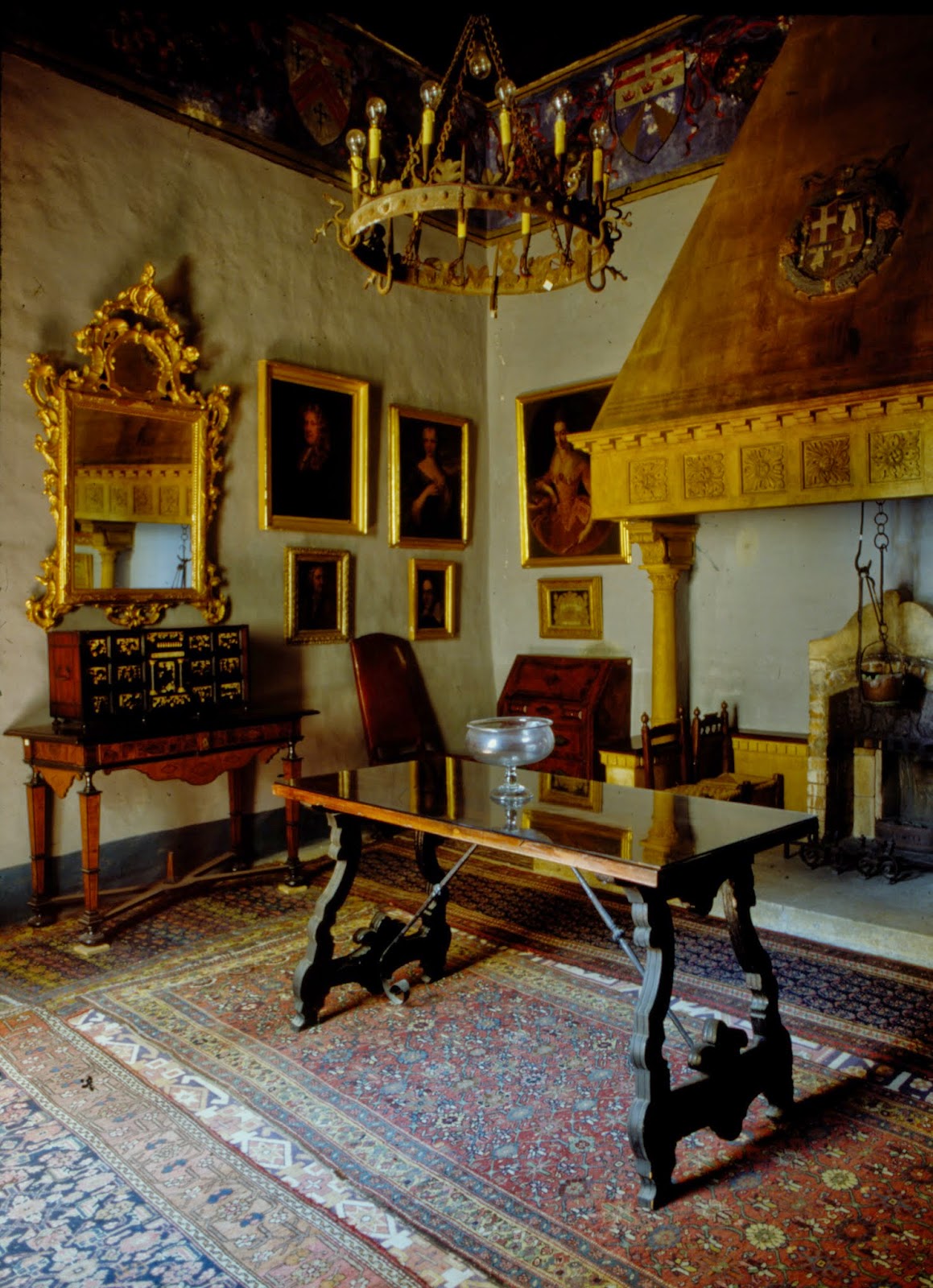 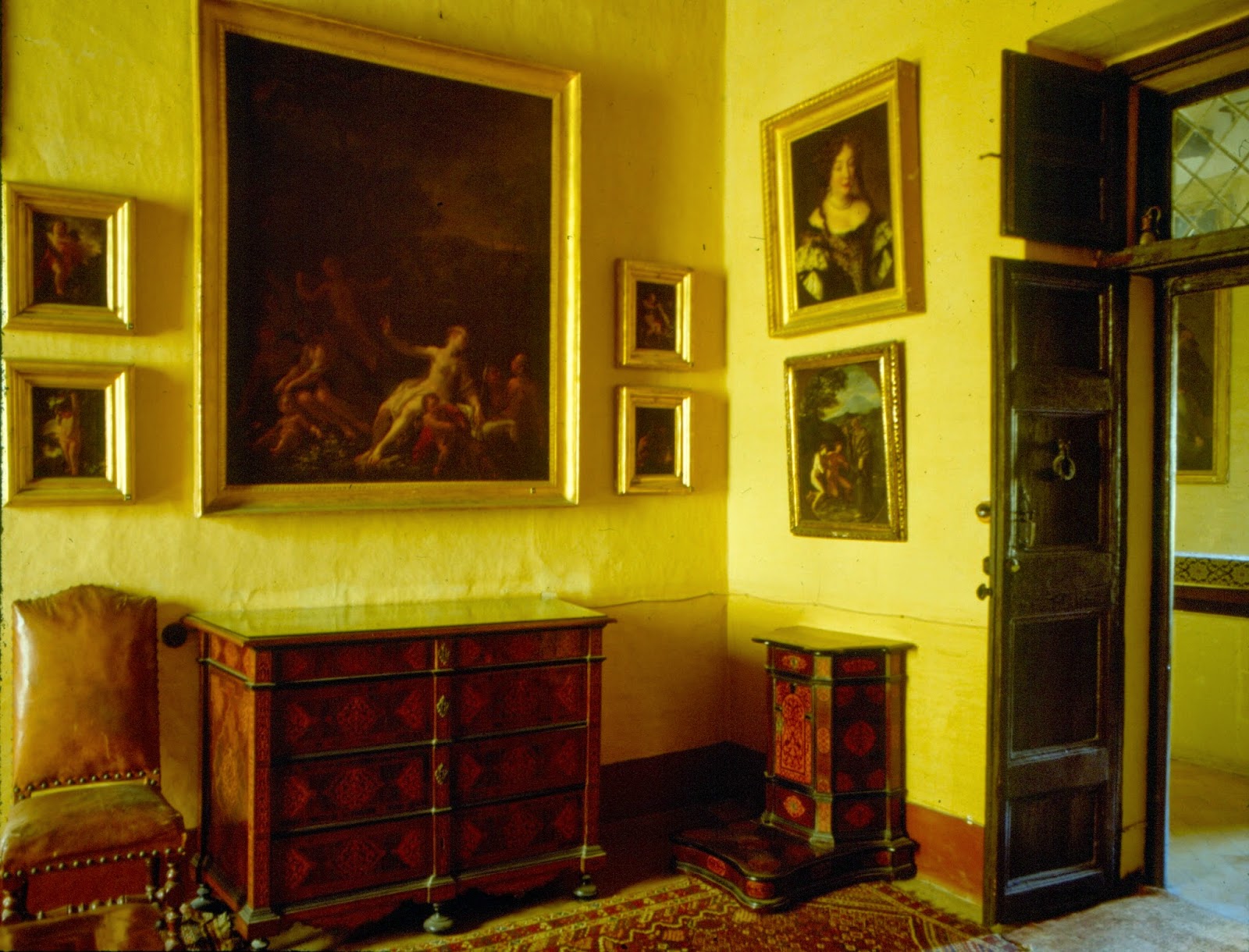 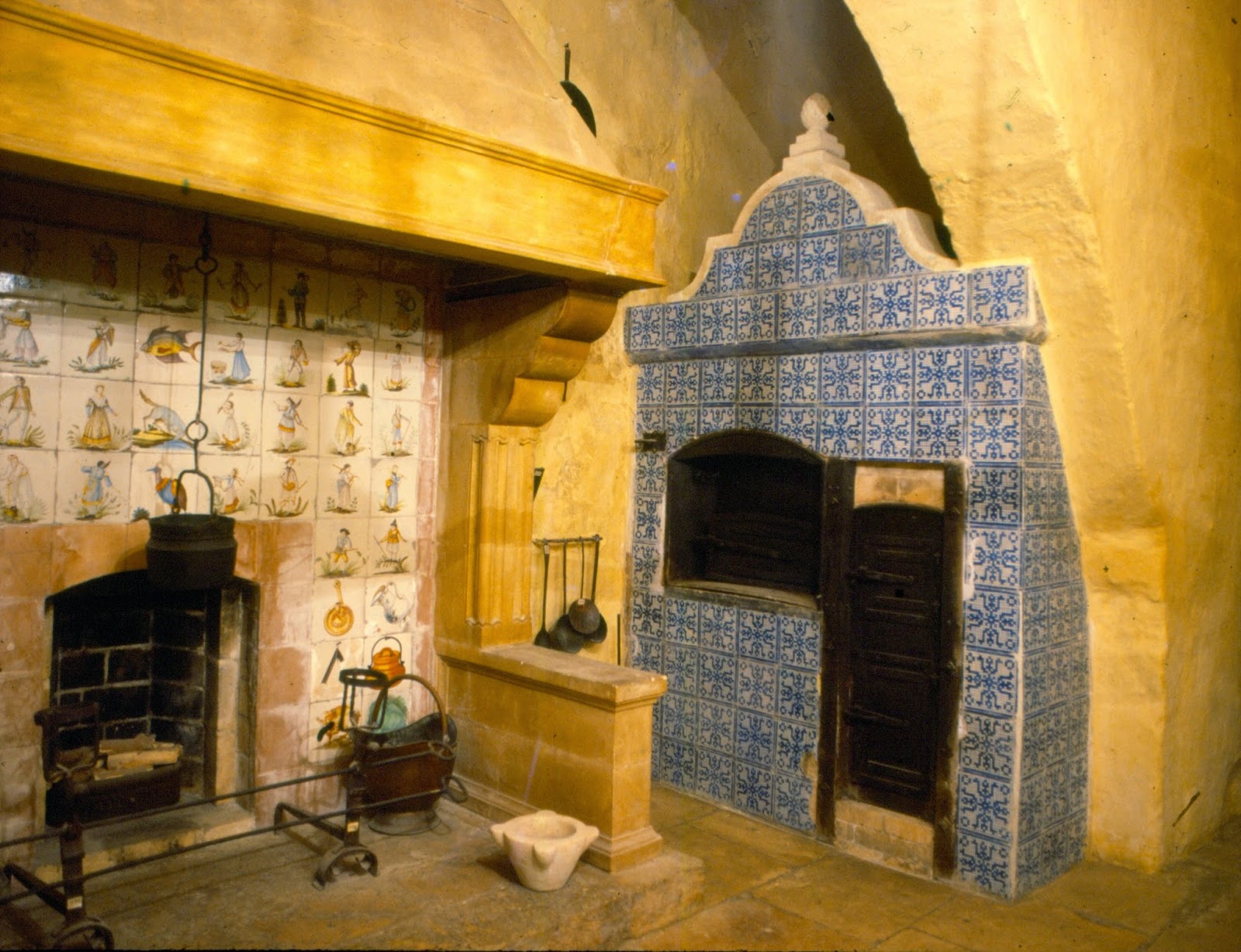 During the Second World War a stray bomb damaged the courtyard of the Norman House, but this was subsequently restored. 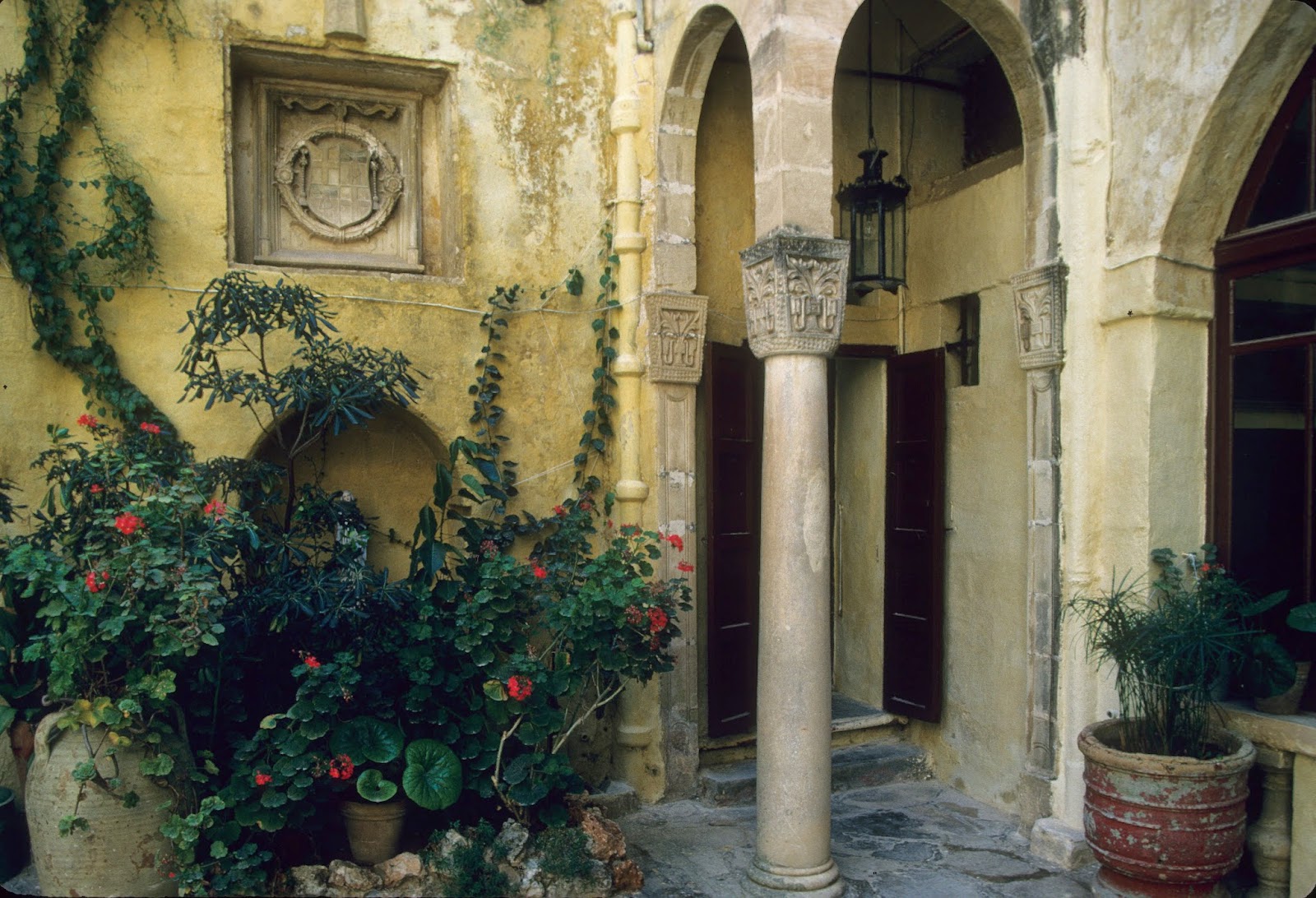 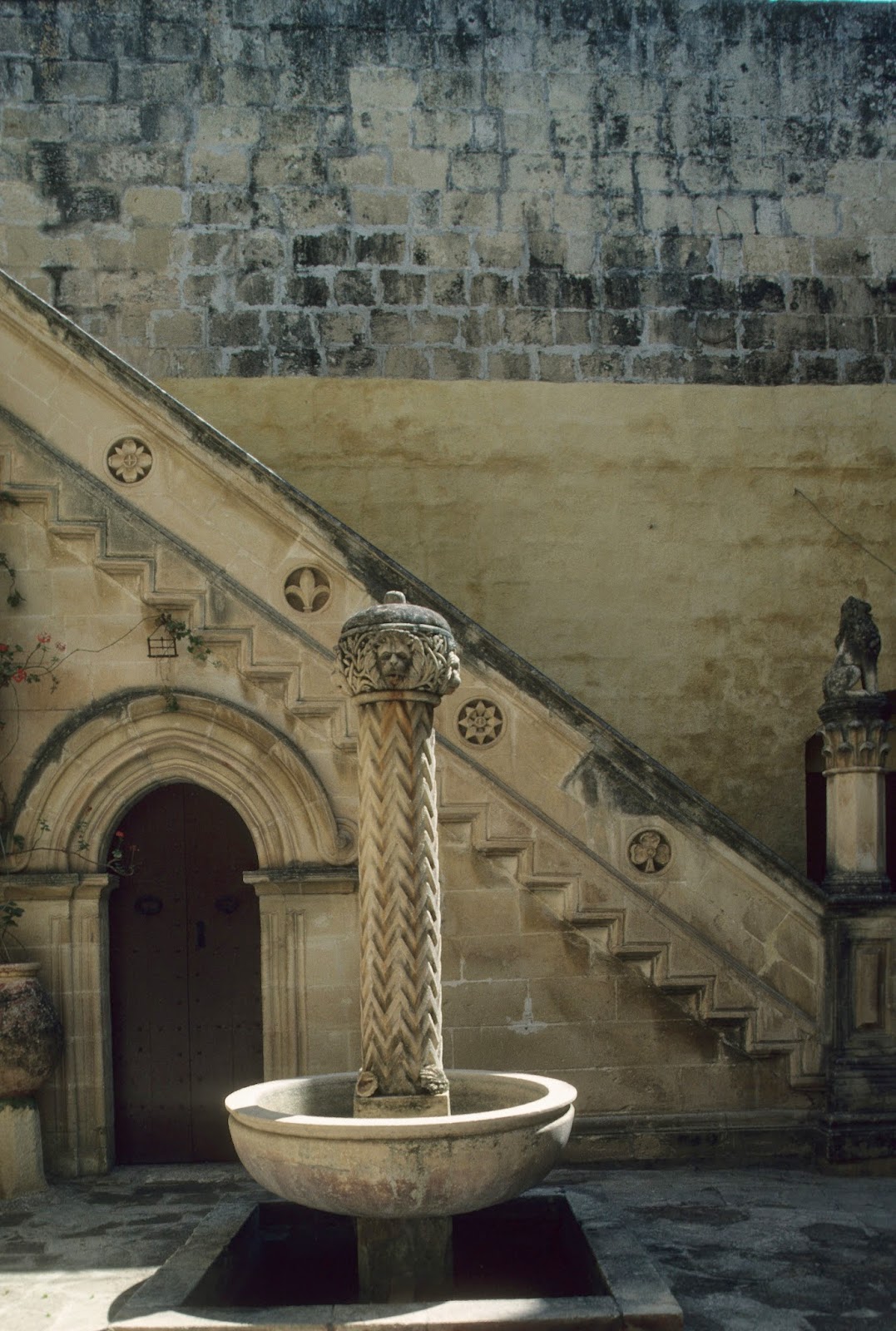 The Norman House, Palzzo Falzon, was restored by Captain Gollcher and his wife who donated the palace with all its treasures to the Venerable Order of St John in the British Realm in 1943. the donation was to take place after the death of both donors. But after their decease the order realised that they were not able to keep the palace in accordance with Capt. Gollcher's wishes, and they passed it over to the National Museum on condition that the wishes of the testators be complied be respected.
Posted by Jimmy Graham at 12:47 No comments:

One of the most precious treasures belonging to the Order of St John was the Sword and Poniard (dagger) of Grand Master Fra' Jean de La Valette. The great victory of the 8th September, 1565 at the end of the Great Siege of Malta earned the admiration and gratitude of Christendom. The crowned heads of Europe vied with each other to honour the Order in the person of its victorious Grand Master Fra' Jean de La Valette.

The gifts of the king of Spain, Philip II, a sword, poniard and gurdle,  were to become among the most treasured emblems of the Order of St John. On the sword were engraved these words: PLUS QUAM VALOR VALETTE VALET. The gifts were presented to La Valette by an envoy from the king, Fra' Antonio Maldonado. He delivered a eulogy before a large gathering of members of the Order and many foreigners who were on the island at that time. 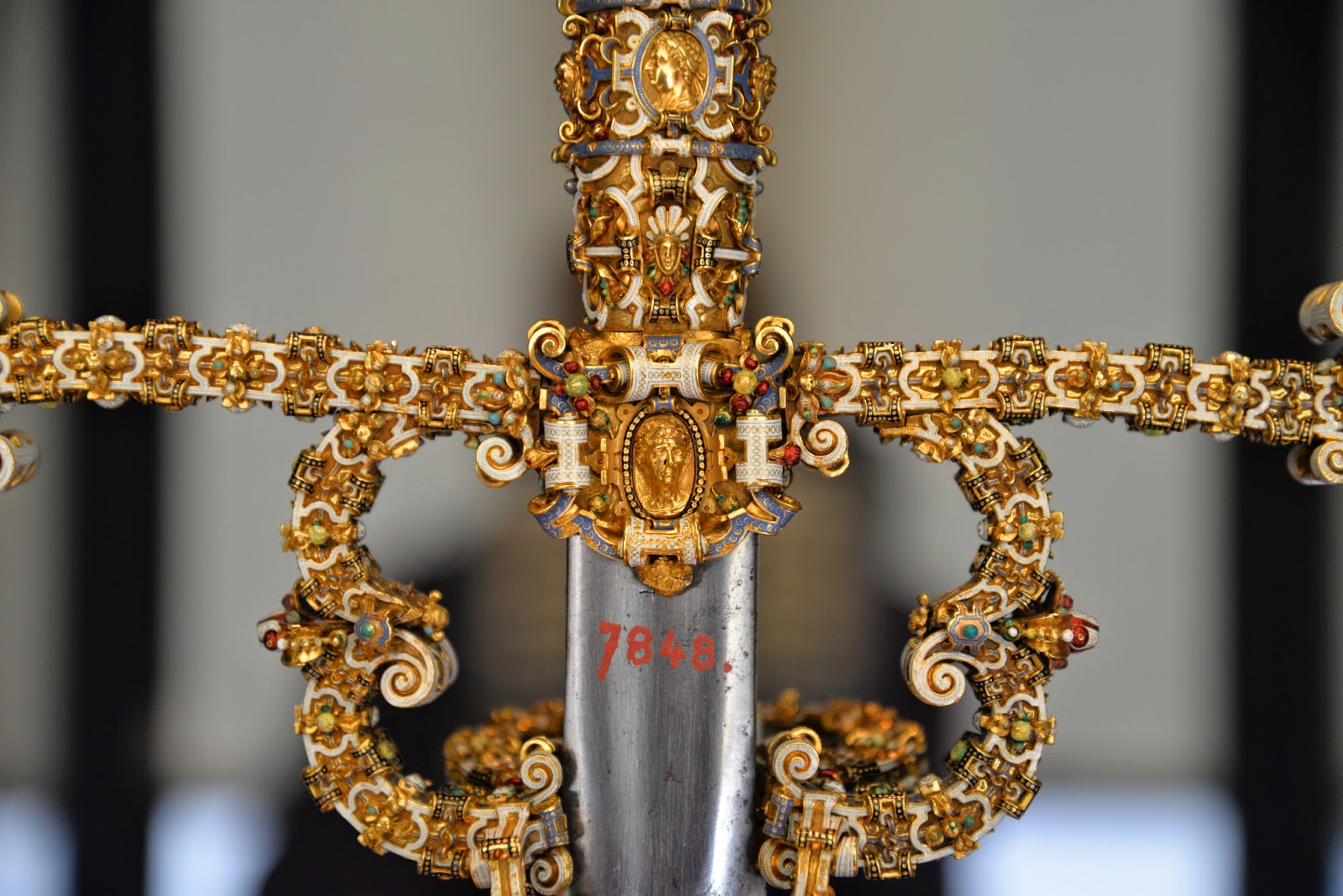 Fra' Antonio Maldonado  acclaimed the Grand Master as the greatest of leaders in Christendom and exhorted him to maintain the struggle against the enemy. La Valette was deeply moved by the envoy's words. He replied that without the intercession of the Virgin Mary, whom, he had implored in battle, the victory would have been impossible.  In gratitude he had already proclaimed 8th September, the Feast of the Nativity of the Blessed Virgin, was to remain a national feast day of the island, and that from now on teh Sword and Poniard would be carried, unsheathed, in the ceremonies of thanksgiving carried out on that day as a sign of readiness to take up arms in defence of |Christianity. 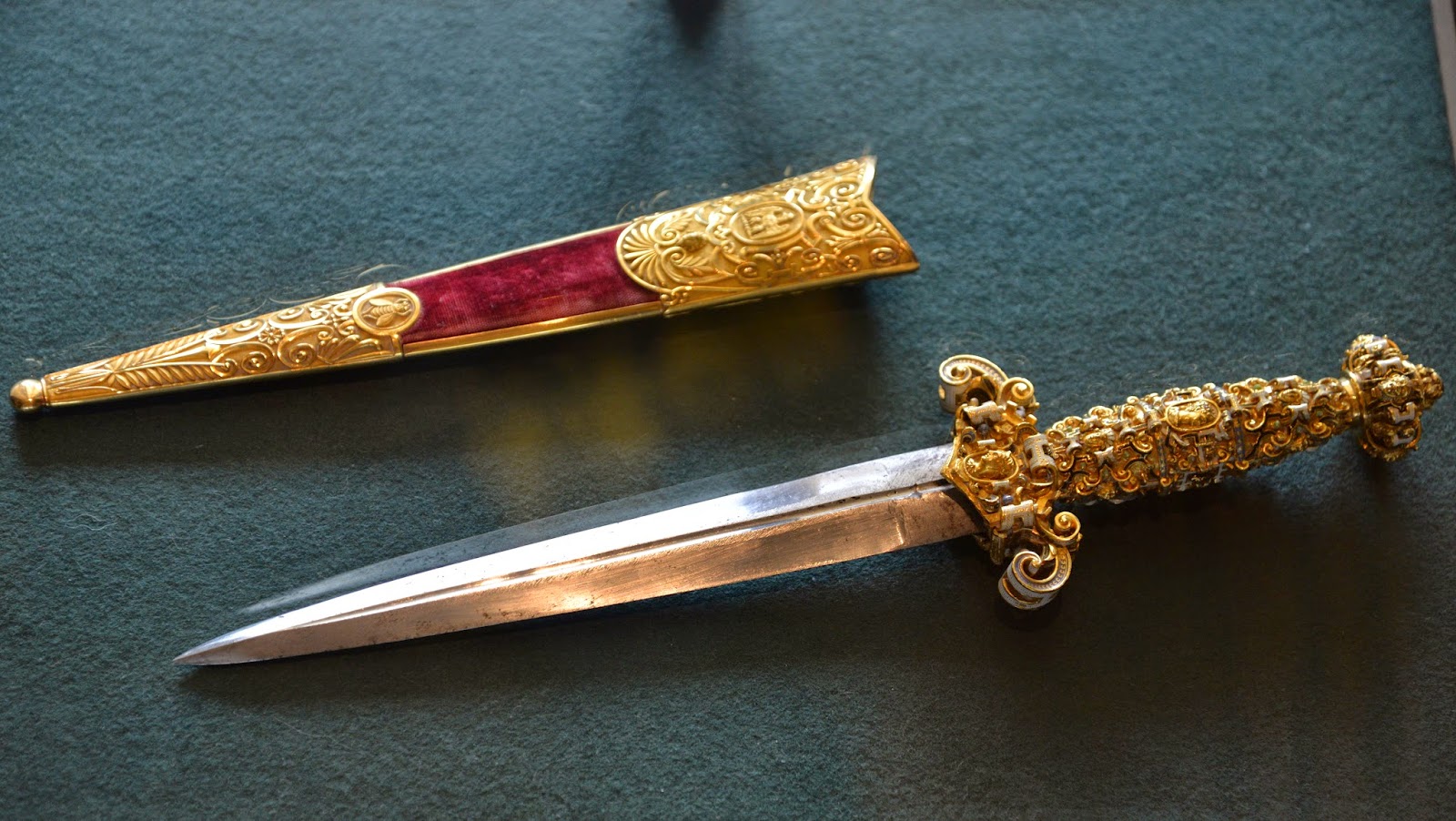 La Valette decreed that the Sword and Poniard should be kept in the Treasury of the Order. When Valletta was built and the Magistral Palace completed, the treasures were kept in the Armoury and only removed in accordance with the instructions of La Valette. On these occasions the Sword and Poniard were carried by a favourite page of the Grand Master- usually the son of a high ranking nobleman. These gifts, now became regalia and added to the splendour of the Order's ceremonial. 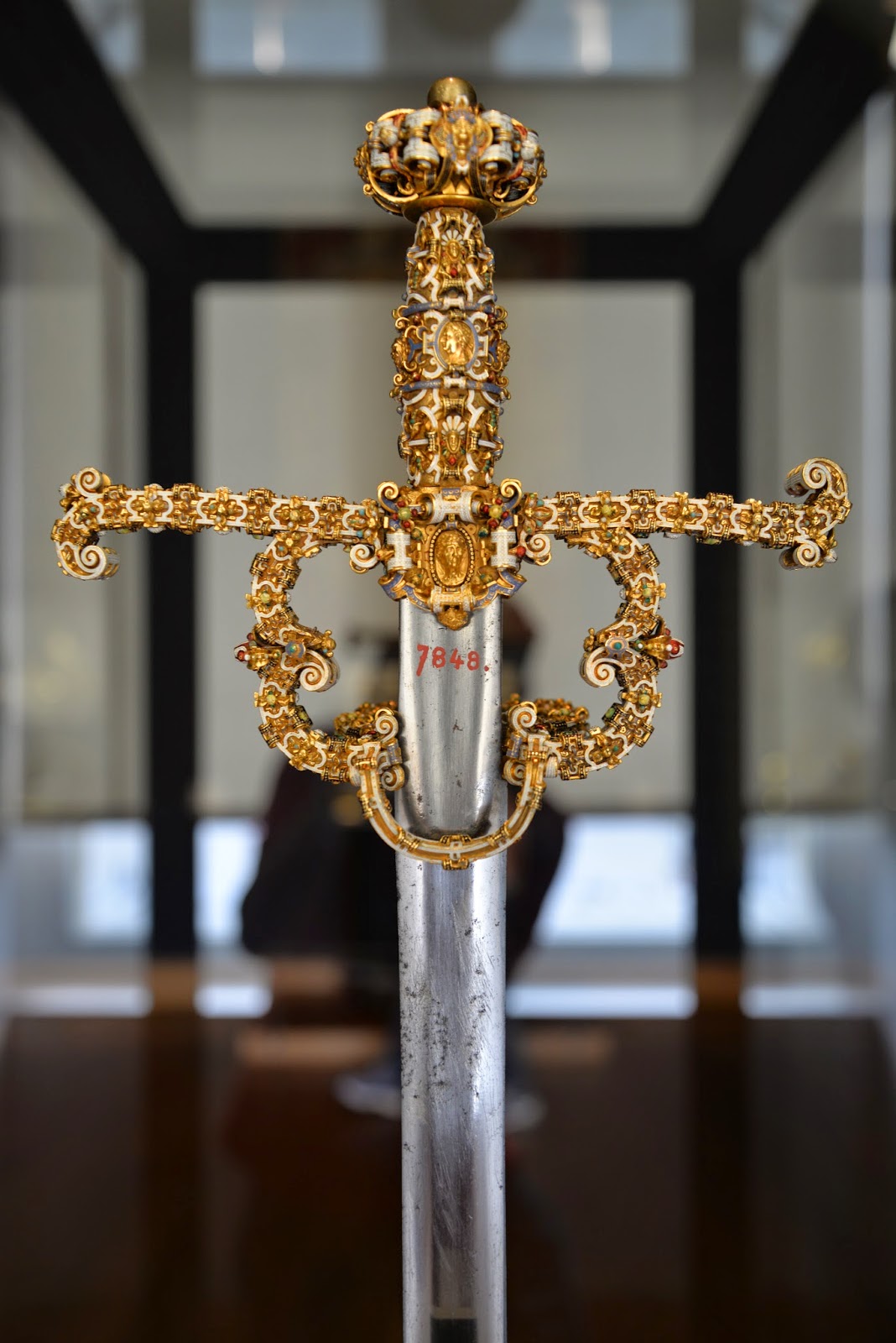 The gurdle was made of gold while the Sword and Poniard were masterpieces of the jewelers art. The hilt and pommel were enamelled and embossed in gold with decoration of emblems of knighthood finished off with scrolls.  The precious stones which encrusted both hilt and pommel gave a flashing brilliance to the weapons when held aloft. 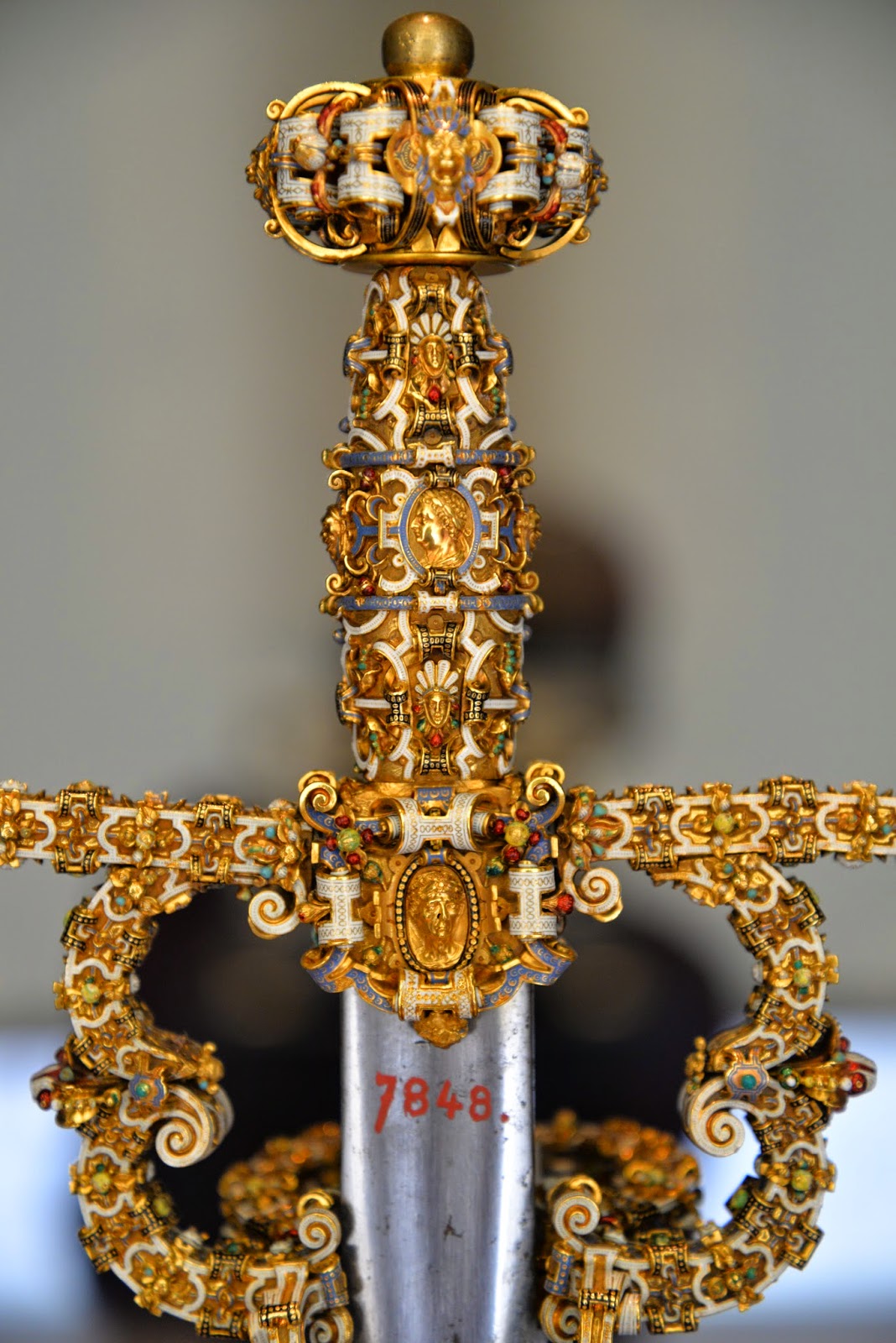 The last appearance of the Sword and Poniard in the Conventual Church of St John at the celebration of Victory was in 1797, a few weeks after the election of Grand Master Hompesch and nine months before the surrender of Malta to Napoleon and the French. it was then that the Sword and Poniard were taken from the Treasury of the Magistral Palace. 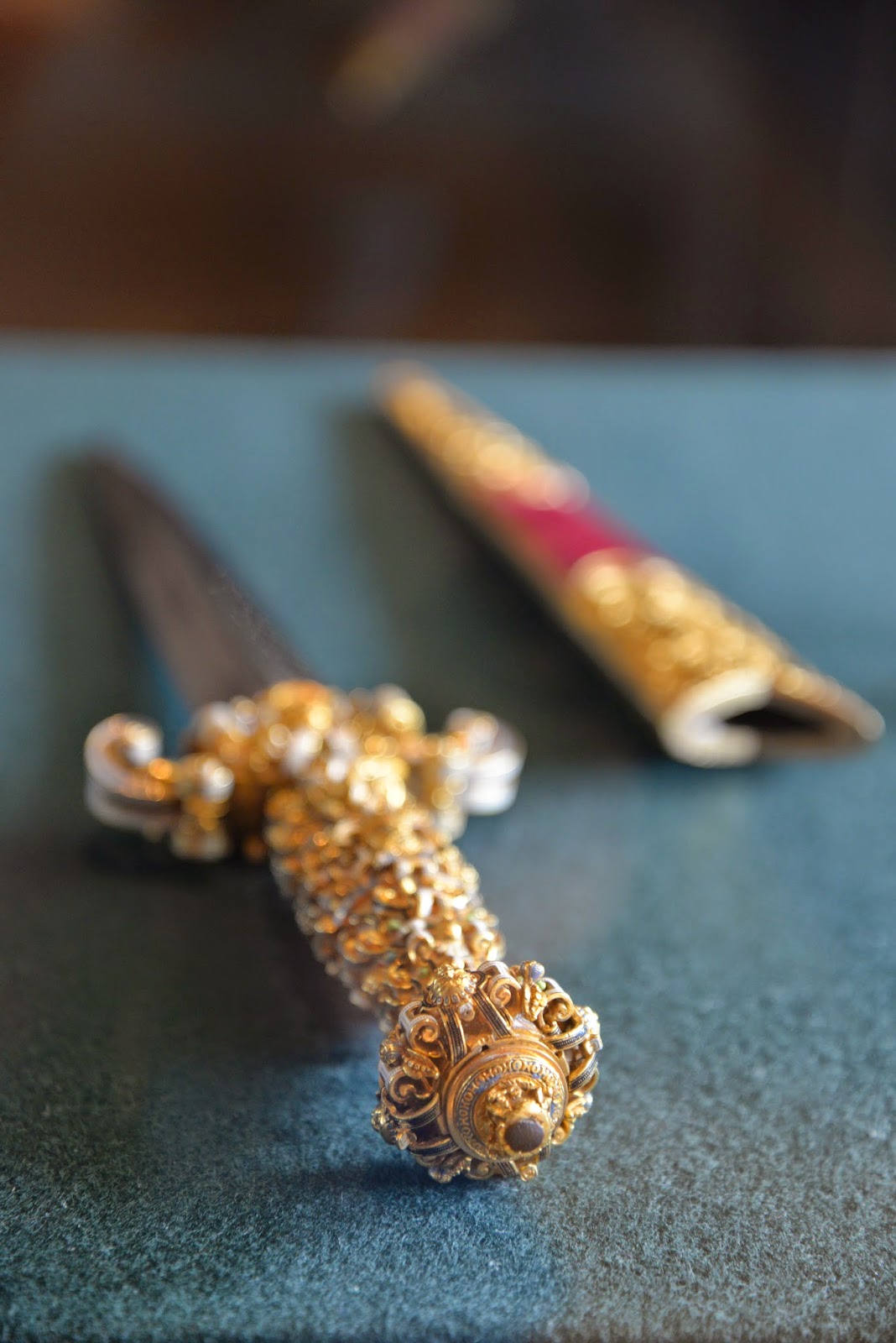 The whereabouts of the girdle is unknown but the Sword and Poniard presented to La Valette by Philip II were taken to France where they are now on display in the Louvre.
Posted by Jimmy Graham at 13:18 No comments: