Grand Commander Fra' Hughes de Loubenx-Verdalle, a French Knight who belonged to the Langue of Provence was elected Grand Master of the Order of St. John in 1581. Only fifty-one, he was young for a grand master. Five years after his election he was called to Rome where he was made a Cardinal and Prince of the Church. Verdalle did his best to live up to his enhanced status; amongst other things he introduced to Malta the elegant fashion for  music to be played at dinner, "a foretaste of the sweet strains of Paradise".

Verdalle is best remembered in Malta for the castle-like palace he built in the countryside near Mdina. He chose one of the most  prominent positions in the island; a great outcrop overlooking the Boschetto (little wood) or Buskett, the only woodland on the island. The Boschetto is a naturally green valley in an otherwise arid island, where Jerusalem pines flourish and there are some of the finest orange groves, watered by, rare, Maltese springs. The valley had long been a favourite place for the Maltese to escape the summer heat and was a favourite resort to enjoy picnics in the shade among the trees, until Verdalle appropriated the Boschetto for his own personal pleasure, and that of the other Grand-Crosses and his distinguished guests. 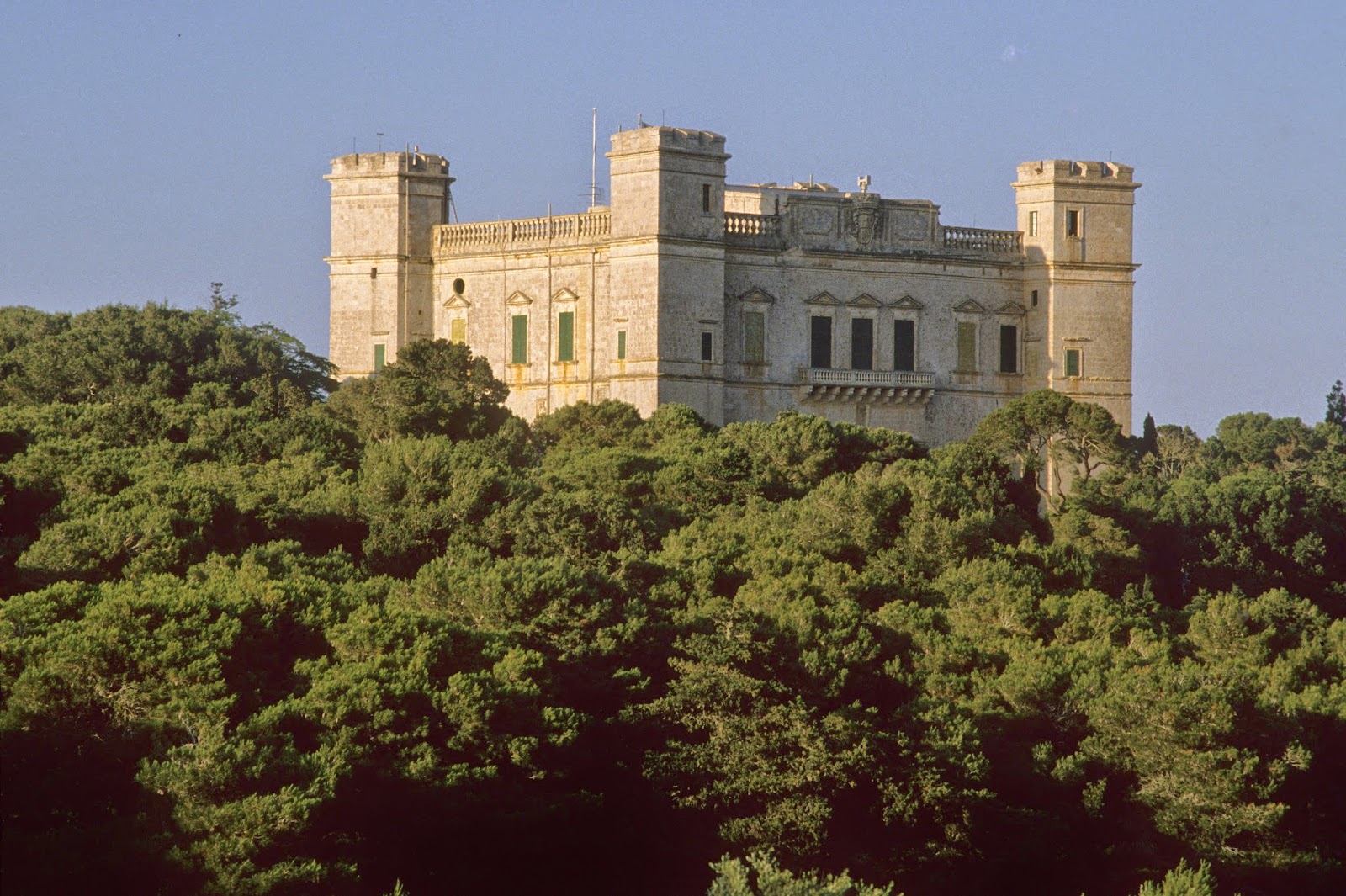 Where the great hero of 1565 Valette had declined elevation to become a cardinal and had been content with a modest hunting box to when he came to the Boschetto, the Cardinal Grand Master Verdalle wanted a palace, and he engaged the Maltese architect Gerolamo Cassar to build it. Work began in 1586.

What Cassar designed was a palace with all the outward appearance of a fort. Almost square in plan, Verdala Palace is three stories high and has four pentagonal or bastion shaped corner towers, rising to a forth storey. The lower storey is cut from the living rock and is surrounded by a dry moat. But the Palace was not built to withstand a siege, or even a determined assault, notwithstanding the four pieces of artillery placed on the flat roof. The towers were merely symbolic, emblematic of the proud military heritage of a grand master of the Knights of St.John. The balustrade parapet was added later; during the reign of Grand Master de Vilhena as were his coat-of-arms carved in stone attached to the balustrade on the courtyard and south west fronts. On all four sides of the castle are the smaller coat of arms of the builder Cardinal Grand Master Verdalle. 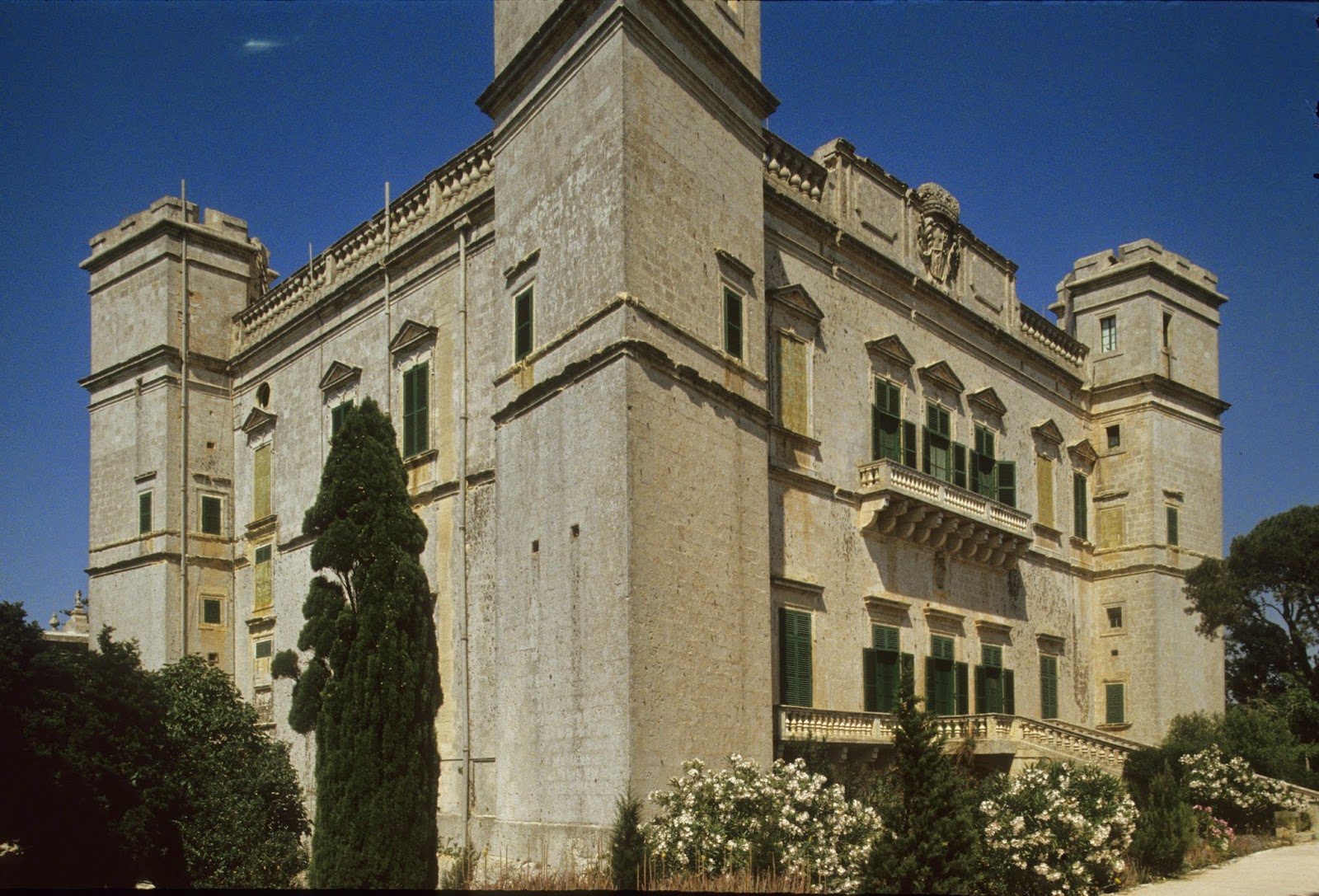 On the south-west front is a balcony from which a second stone staircase descends to a terrace built by Grand Master Lascaris. Beneath is the terraced garden constructed by walled parterres, filled with shiploads of topsoil; imported from Sicily.

Above the main entrance on the courtyard front , beneath Verdalle's arms  is the inscription "Monte Verdala, Ros et Pluvius" "May dew and rain fall on Monte Verdala". 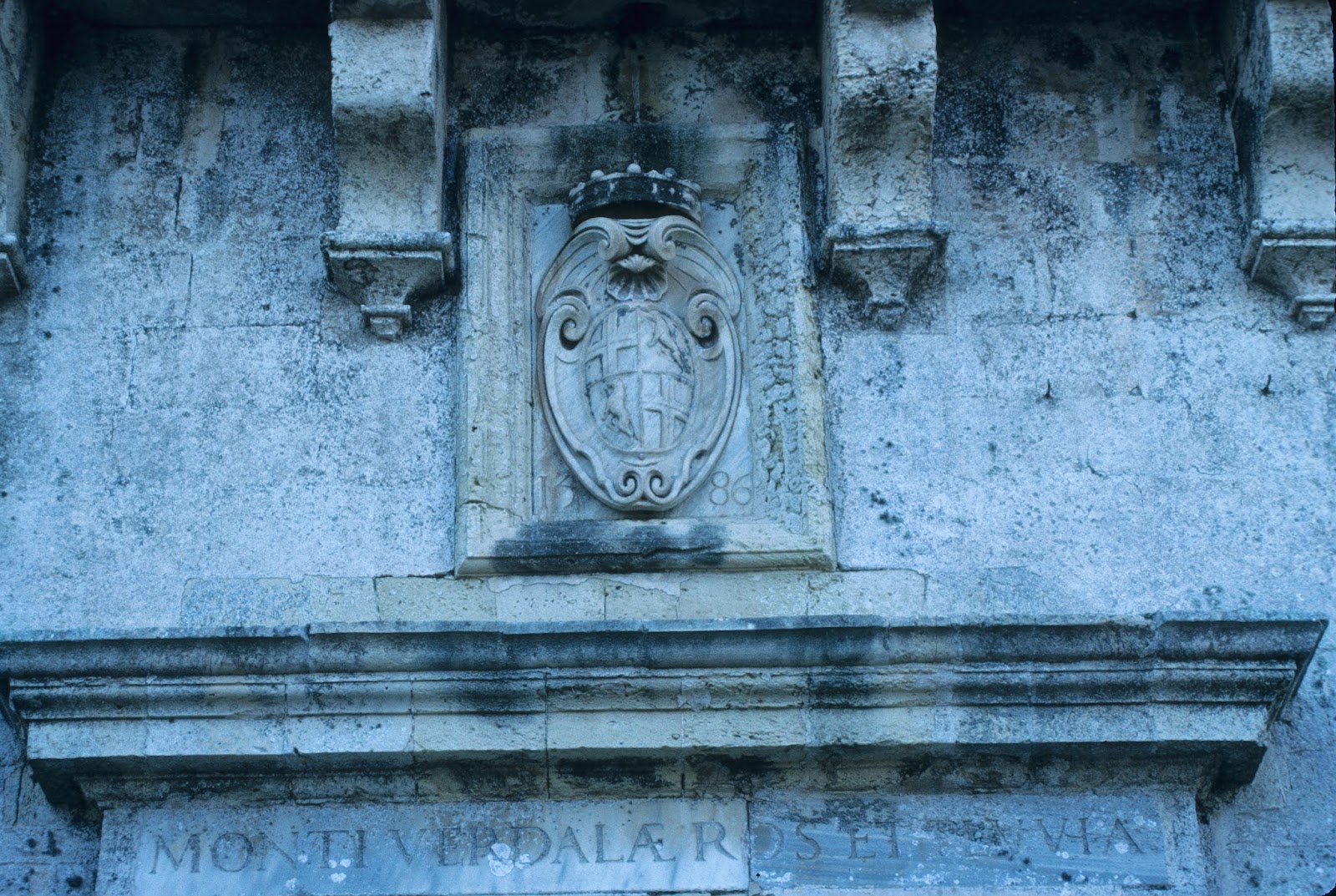 In the entrance hall is a monumental bust of Verdalle wearing the cardinal's beretta. 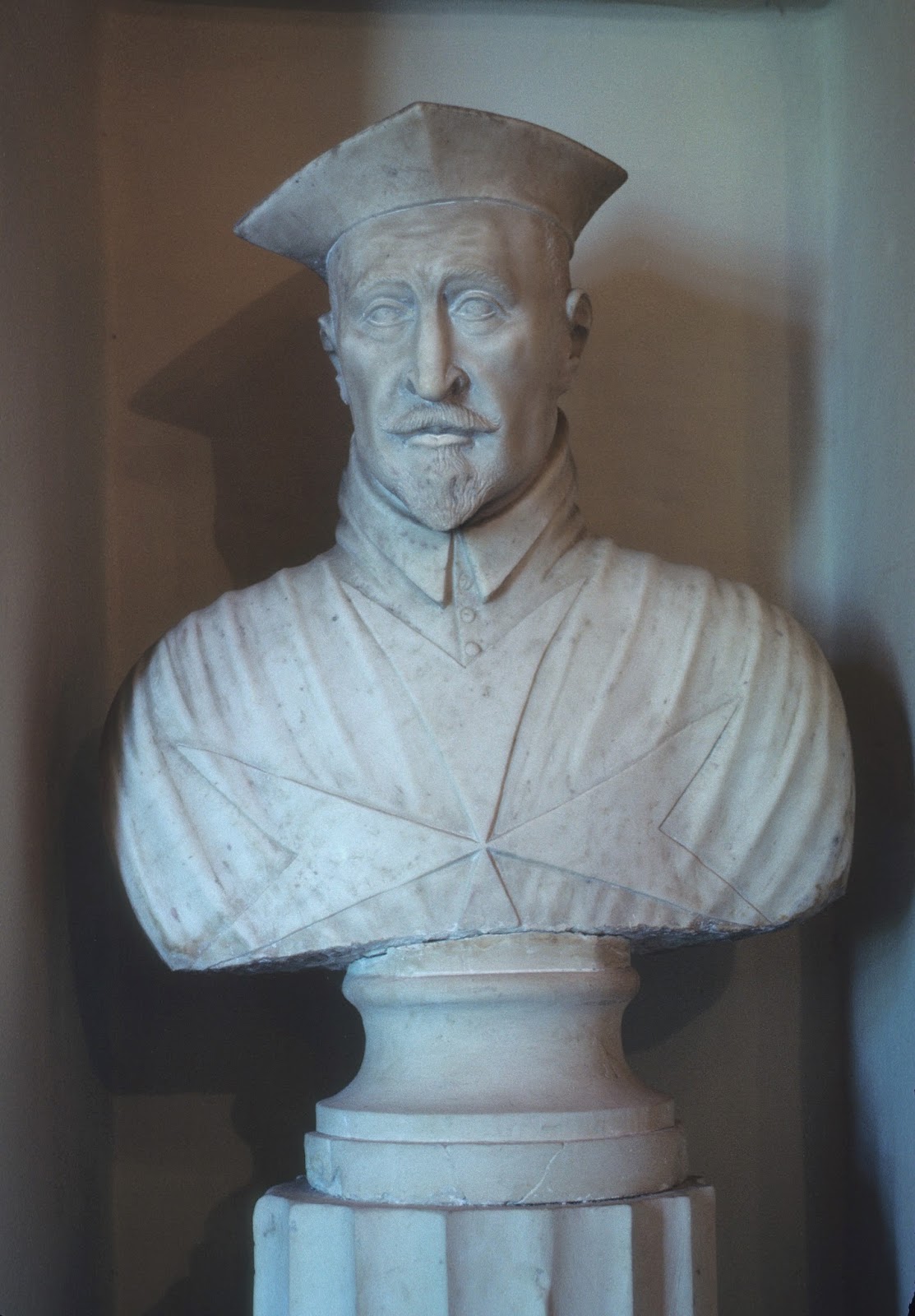 On the left side of the entrance hall  were the Grand Master's private apartments. These are the four rooms opening from the great hall on the piano nobile or first floor. In the palace there are three halls and twelve smaller rooms. This is a palace built for pleasure and retreat from the cares of state, not a fortress to repel attackers. However within the walls are secret staircases and oubliettes, some of them with holes carved in the walls for fastening manacles attached to unfortunate captives, imprisoned here for who knows what ends? 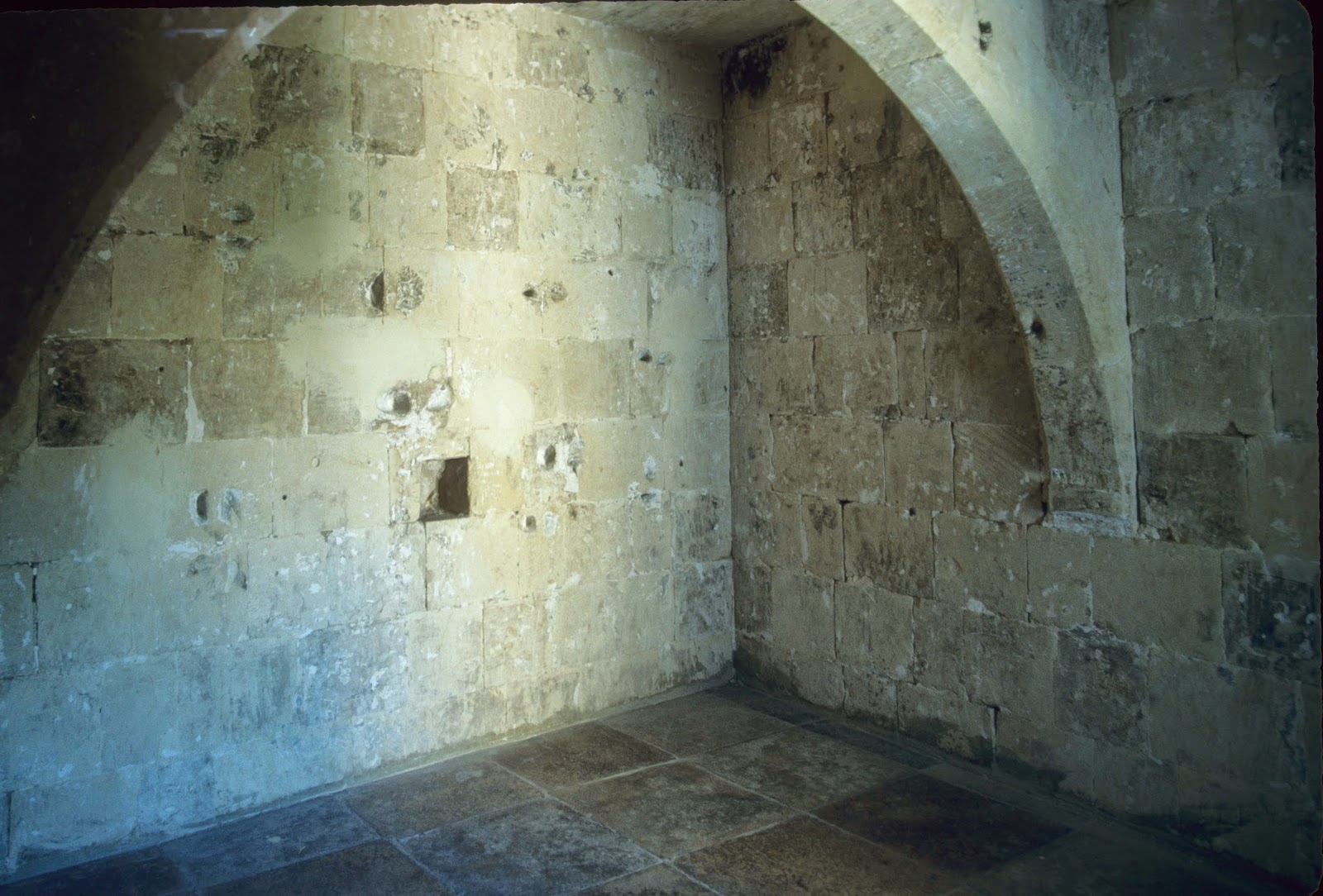 The salon has a marble floor and a high ribbed vault ceiling. At either end of the room are lunettes  painted by Filippo Paldini that depict the triumphal rise and rise of Fra' Hughes from cradle to the magistry of the Order of St. John and to his further elevation as a Cardinal. He is depicted at the age of sixteen presenting his proofs of nobility to Grand Master de Homedes for admission into the Order, as Governor of the Artillery, as Grand Prior of Toulouse, as Ambassador of the Hospitallers to Pope Gregory XIII and as Grand Master of the Order of St. John of Jerusalem.

The wide spiral staircase winds up through the palace from the basement to the flat roof. The steps shallow enough to permit easy  passage by elderly knights wearing  armour. 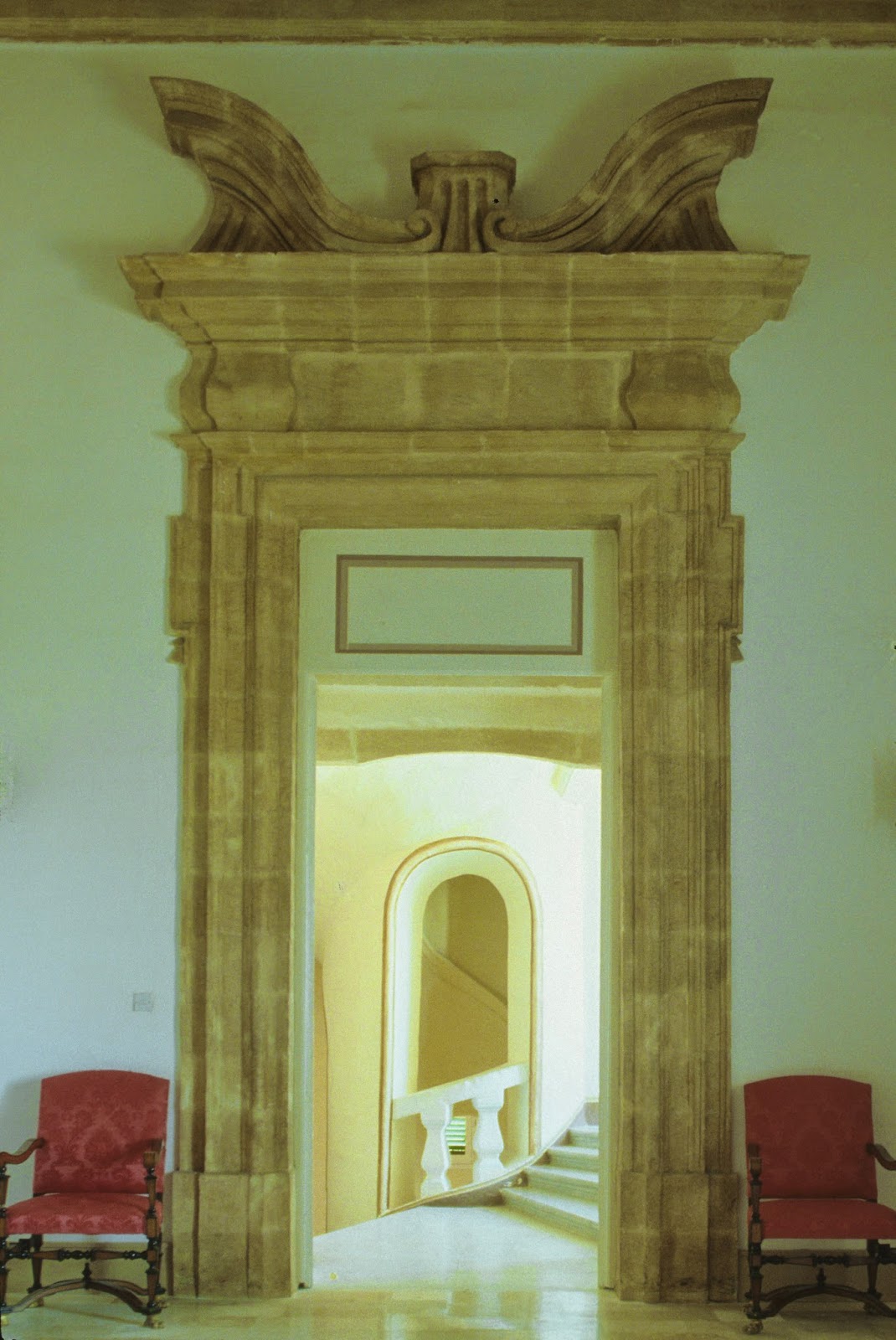 Above the entrance to the great hall, is inscribed the motto, Cedant Curae Loco; "All cares surrenders in this place." A fitting motto for a place of retreat from the cares of state.. 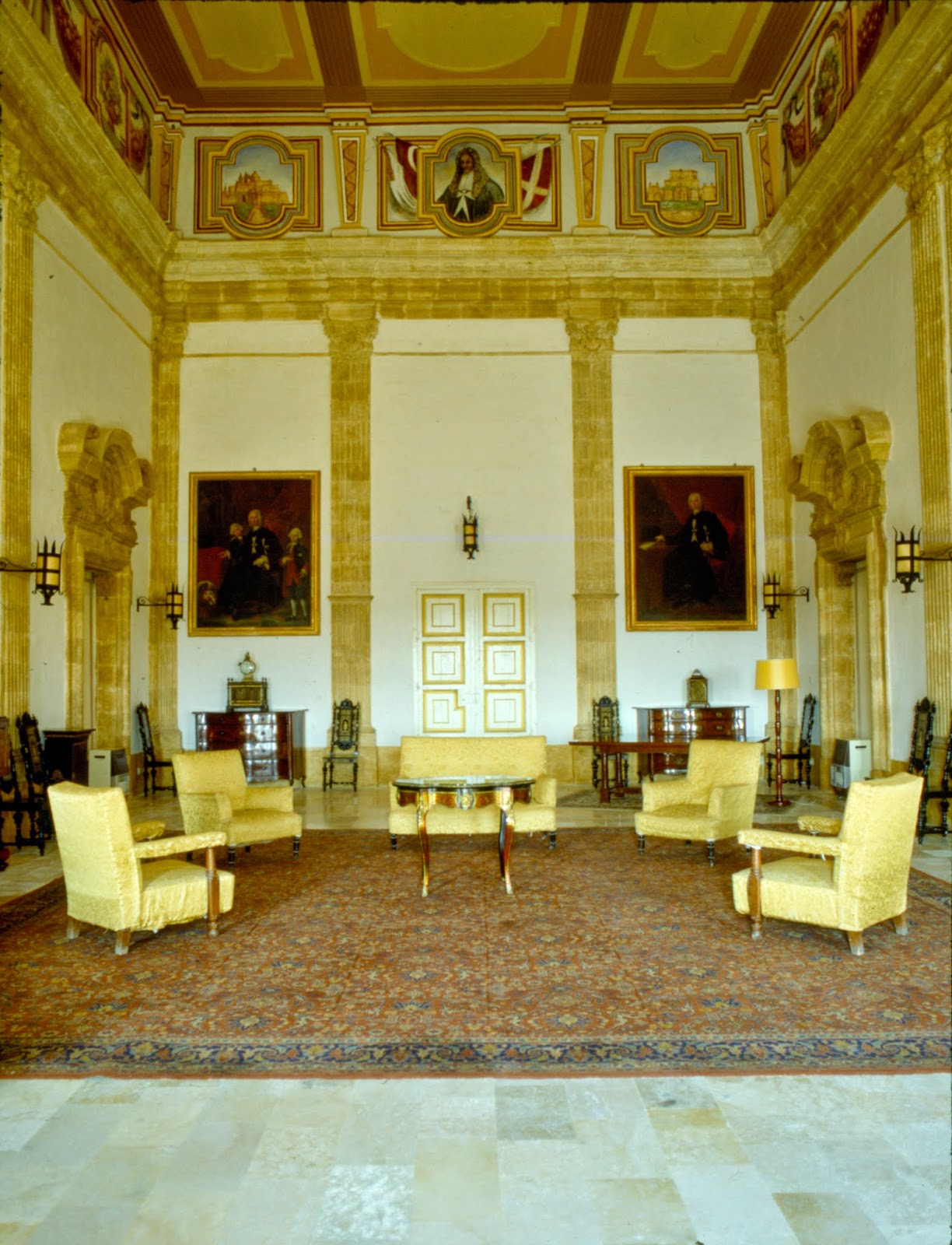 The bedrooms and private apartments have beautiful wooden ceilings painted during the magistry of  Fra' Manoel de Vilhena and  bearing the Portuguese Grand Master's emblems. In spite of these lovely embellishments, in all other respects the palace retains the austere identity bequeathed by its builder. 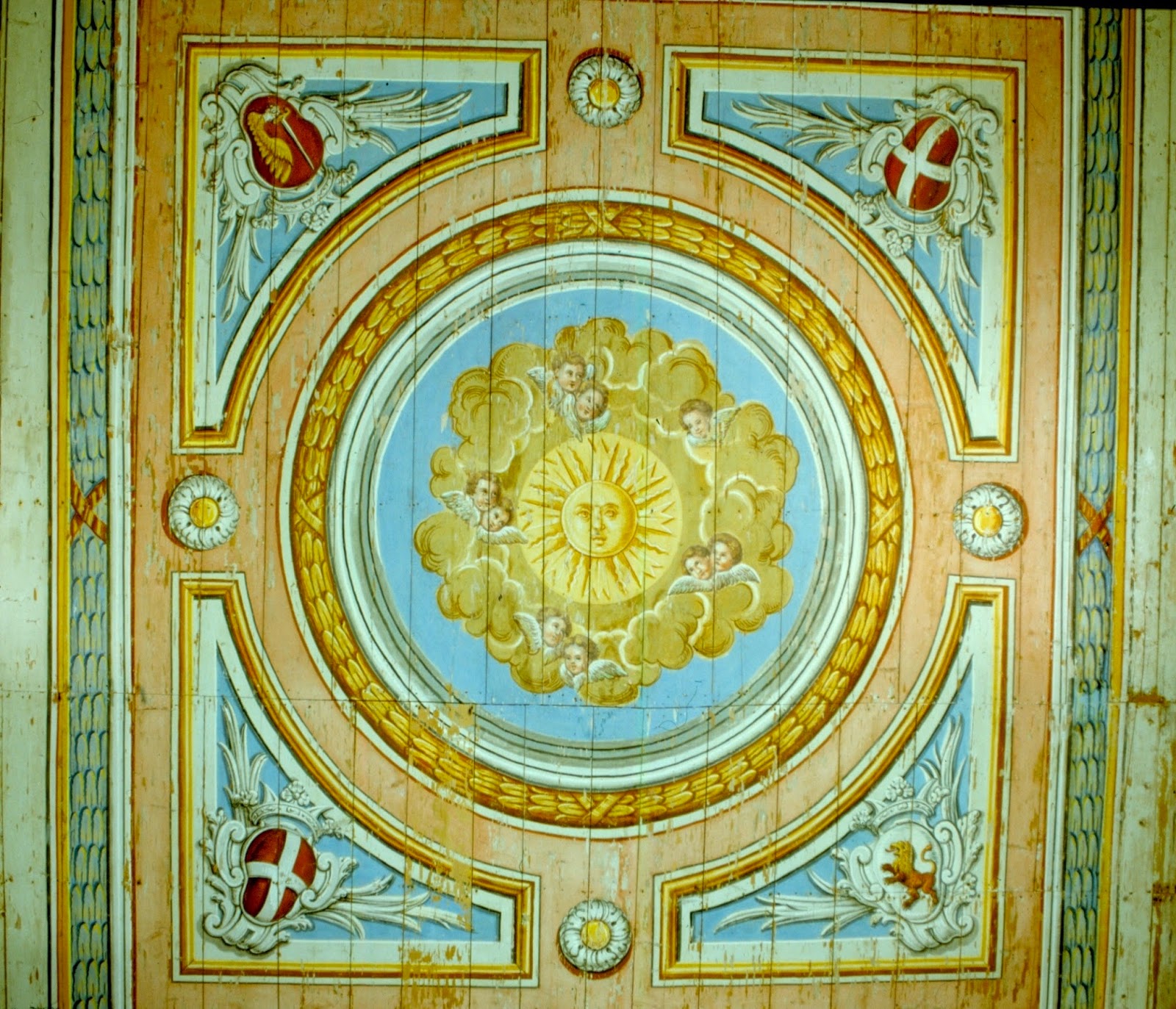 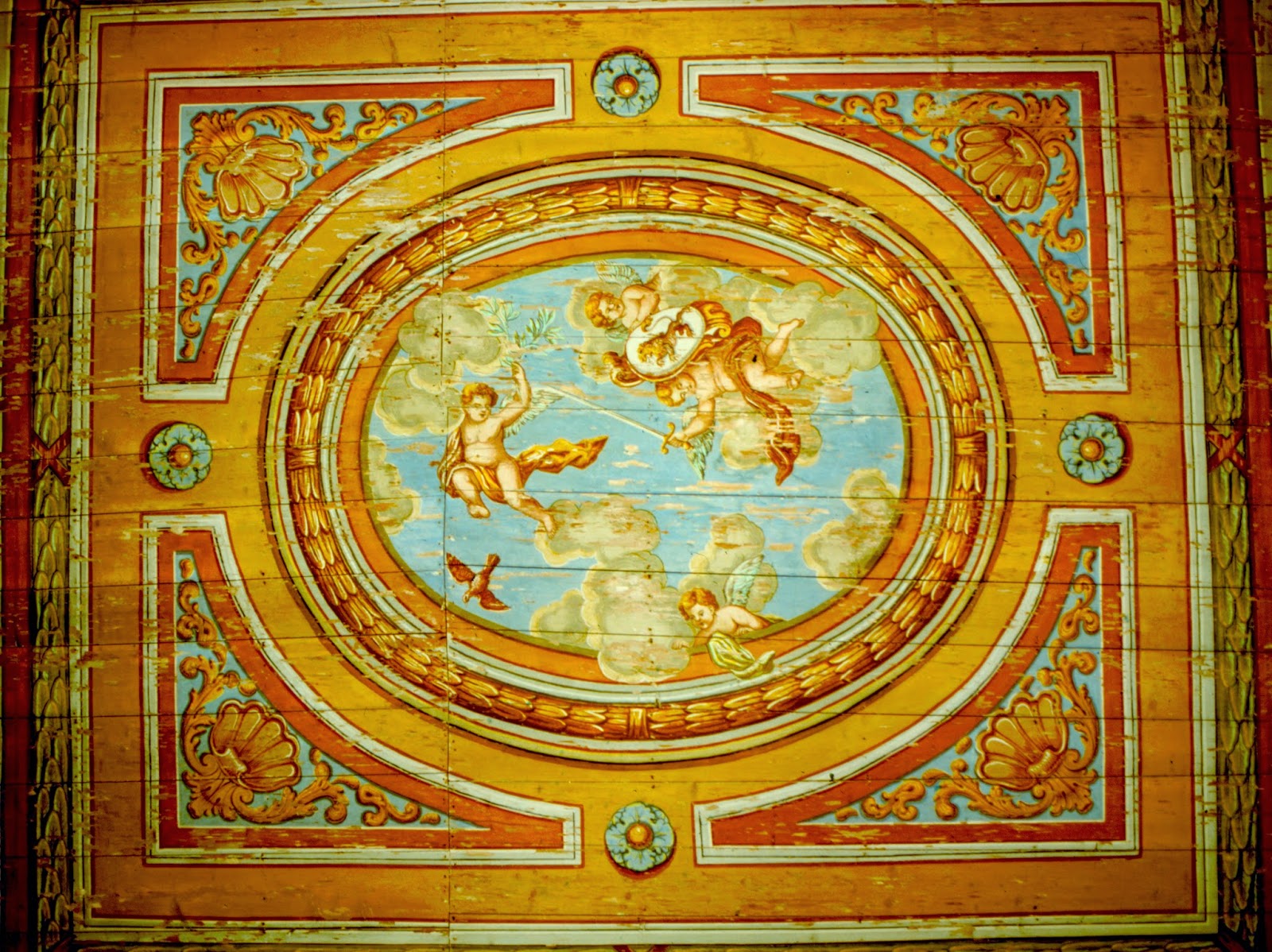 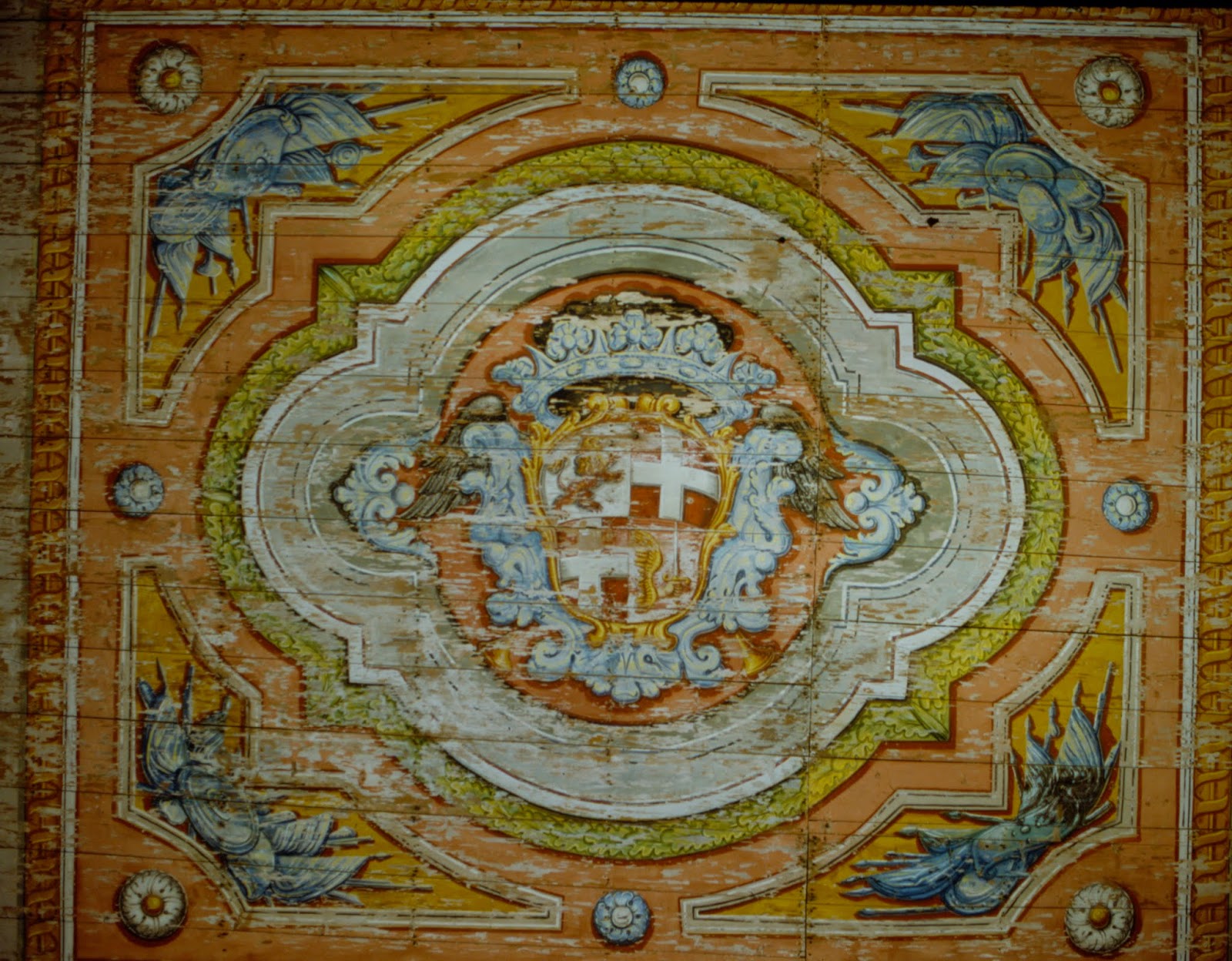 These wonderful airy rooms with high ceilings and shuttered windows open on to stone balconys that catch the breeze, and have  marvelous views of the island in all directions. The Palace has been a favourite retreat for the islands' rulers ever since Verdalle bequeathed his palace to the Order. In the Colonial era Verdala was used by the British Governor Generals for weekend houseparties. Verdala Castle remains an official residence of the President of the Republic of Malta.
Posted by Jimmy Graham at 11:43