The Order of St John granted the islands of Piskopi (Tilos) and Kalkia to Borello Assanti of Ischia at two hundred florins a year. It does not appear that he became a vassal of the Order but the terms of the contract made clear that he had to provide the guard service. The Order reserved the superior lordship of the island while the falcons of the island were reserved for the master as were the rights over shipwrecks. Assanti was also constrained from exacting any service from the islanders that had not been exacted by the Order in the past.

The tower at Stavrou Lambrou is built on an eerie high above the tallest sea cliffs on Piskopi. It is the strongest naturally fortified site on the island. 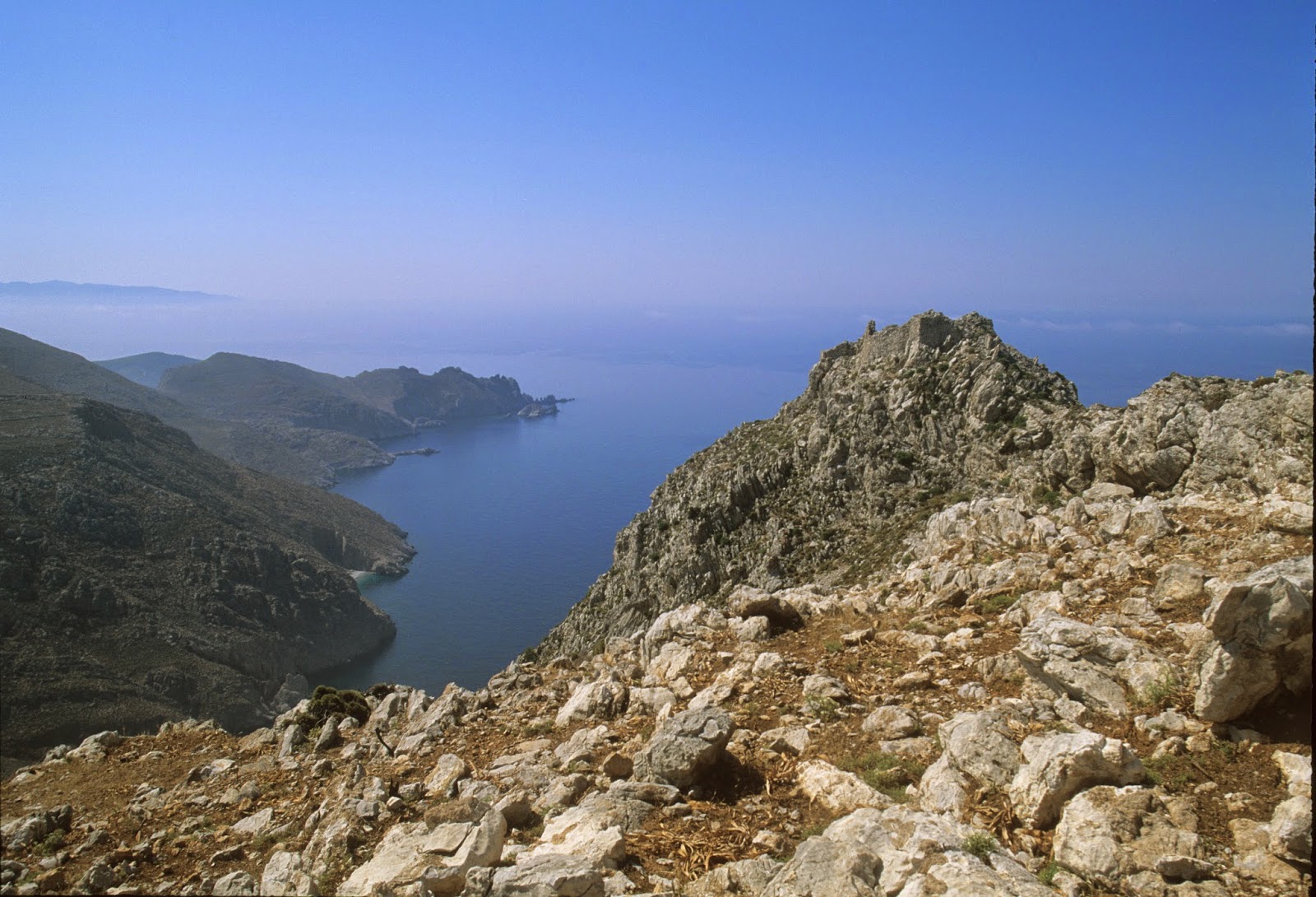 Despite being protected by the castle and towers, its small size and isolated position meant that Piskopi was vulnerable whenever the power of the Turks was in the ascendancy. In 1457 the Turks raided Piskopi together with the islands of Nisyro, Lerro and Kalymno and the village of Archangelo on Rhodes. In 1505 Kamel Reis the Ottoman admiral sacked Piskopi, Lango, Symie and Lerro. Piskopi remained part of the Hospitaller state until the siege of 1522 finally ended  their rule over the Dodecanese.
Posted by Jimmy Graham at 01:31 No comments: 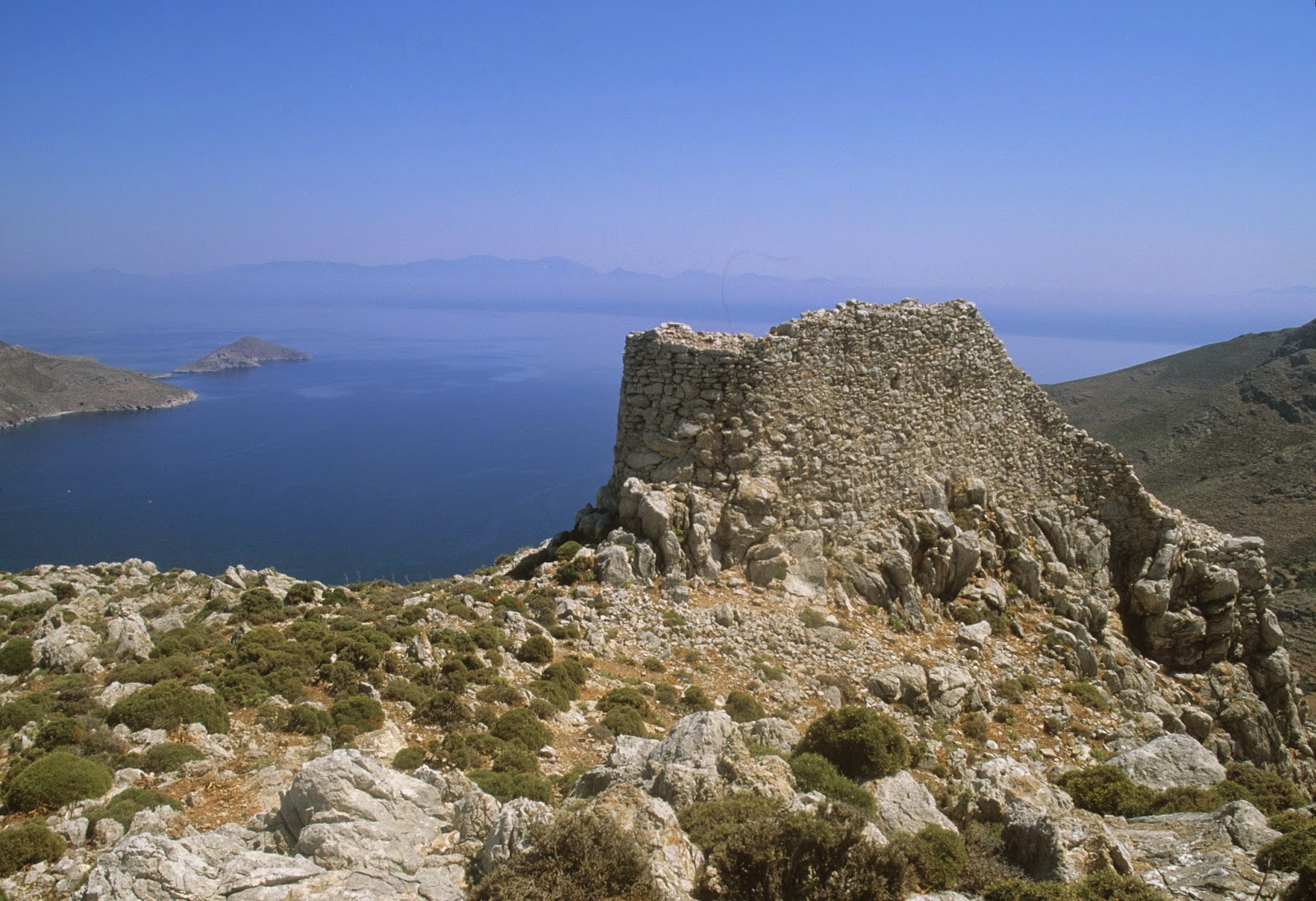 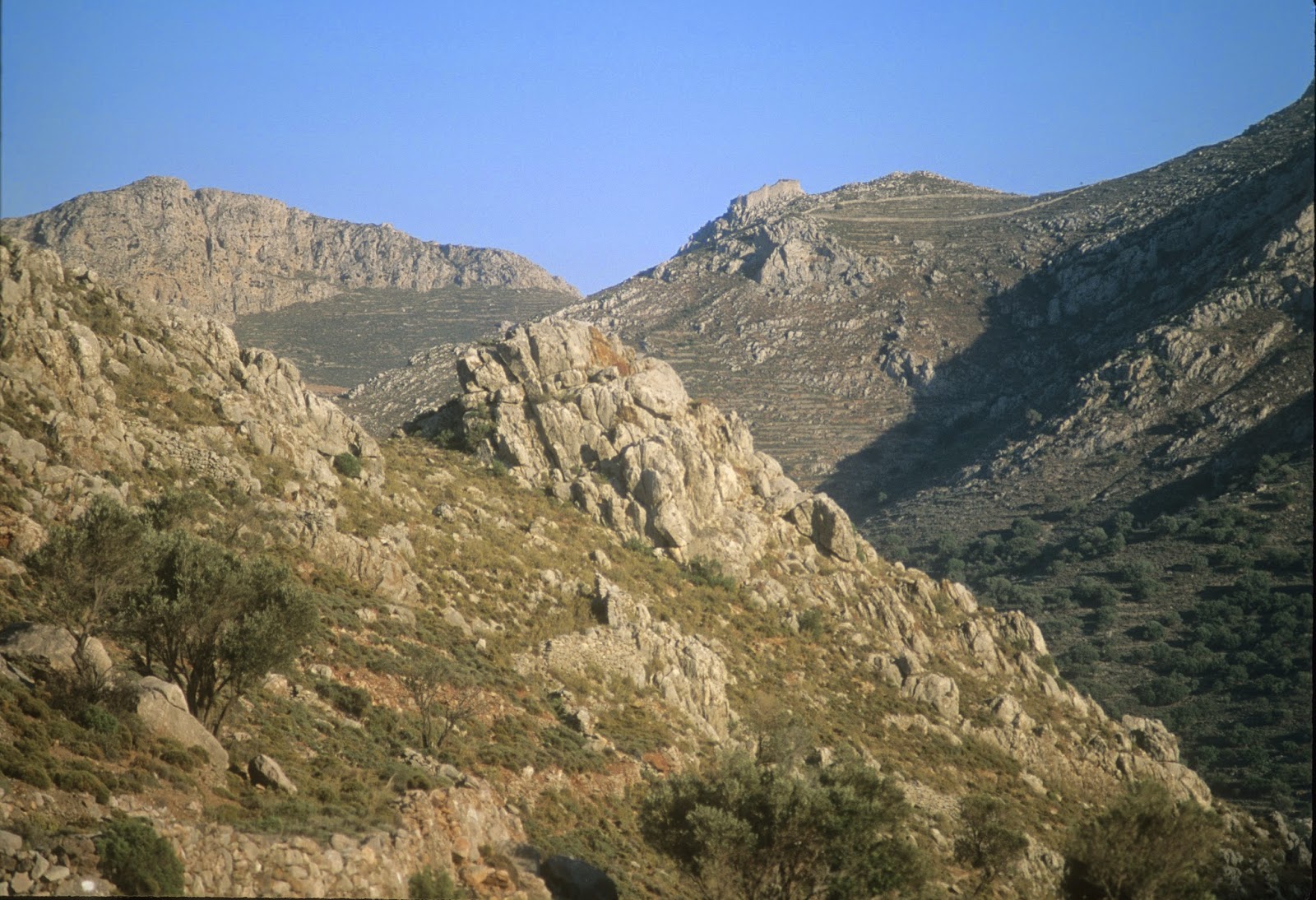 Posted by Jimmy Graham at 03:20 No comments:

Piskopi 'lookout' took its name from its mountains on which the Knights of St John built seven castles and watchtowers, most of them with commanding views over the surrounding seas. Piscopi or Tilos  is 14.5 kilometers long from northeast to southwest and about 8 kilometers at its widest point. It is about halfway between Rhodes and Lango (Cos) and 15 kilometers southeast of Nisyro (Nisyros). 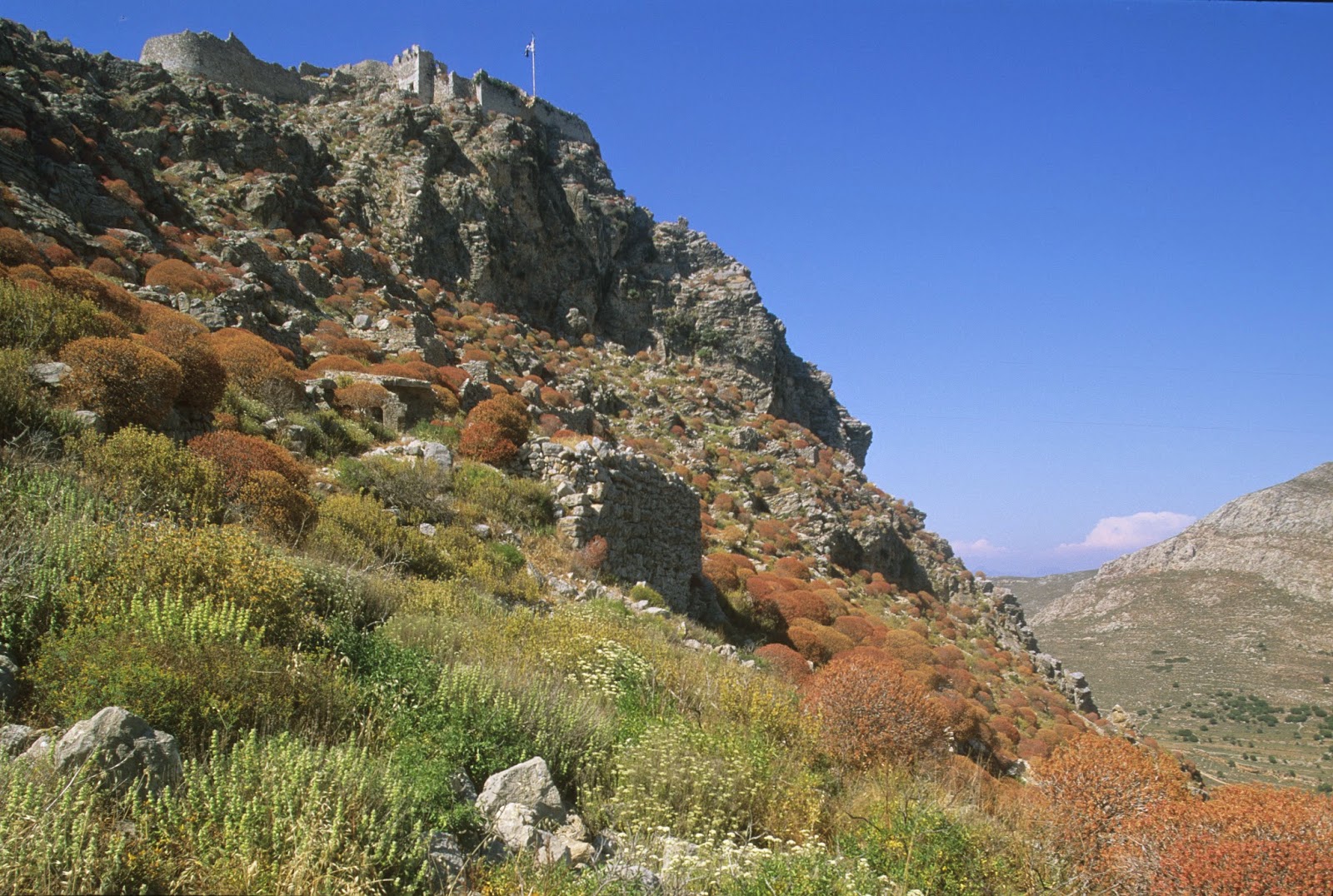 The most important fortified stronghold was the castle on the summit above the present day village of Megalo Chorio. In the Knight's period the villagers lived within the castle walls as protection from pirates. The hillside had been the site of an ancient settlement and parts of the fabric of the castle, in particular the lower courses, the gatehouse and the corner towers were largely constructed from reused Classical masonry. 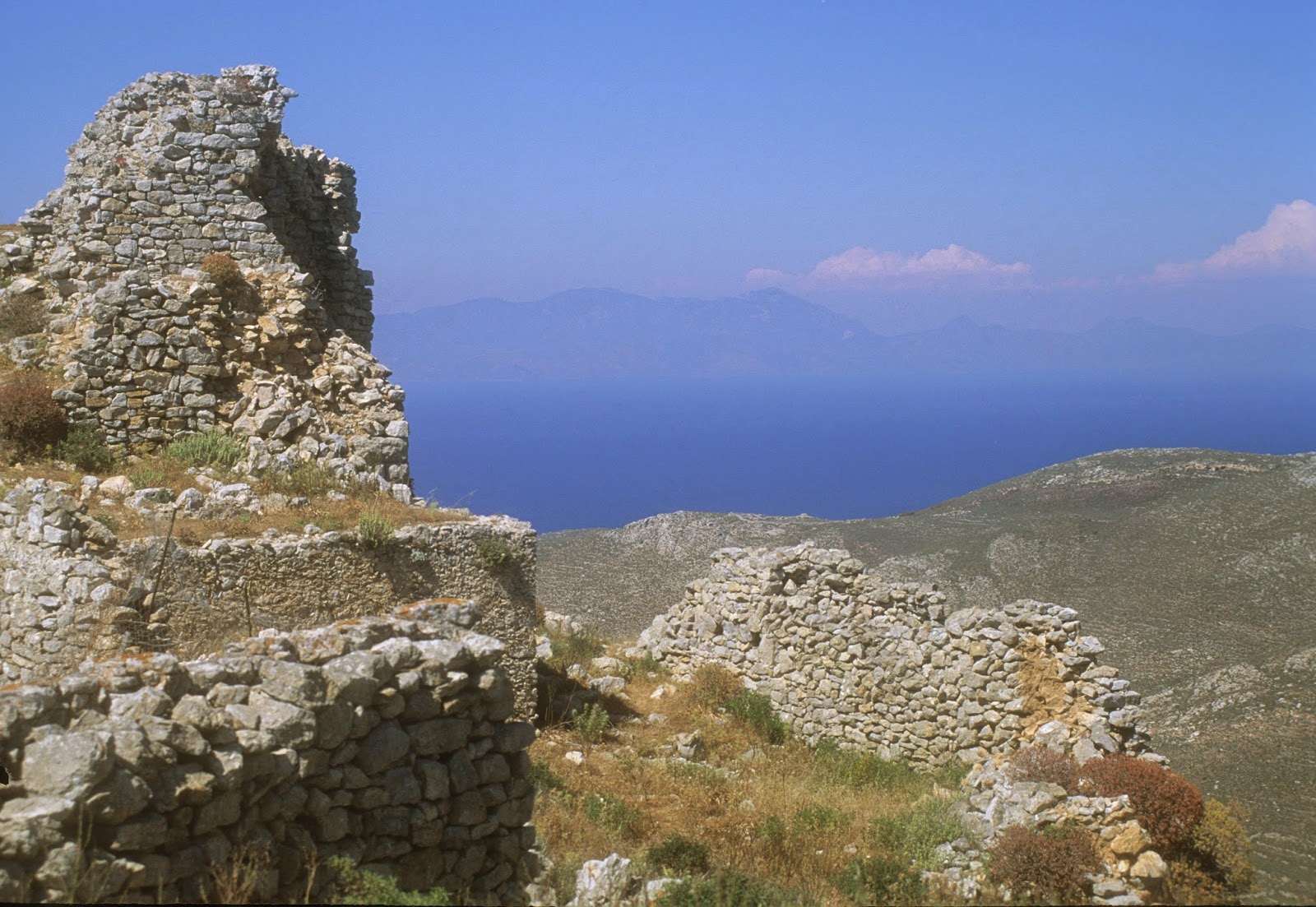 From the castle are clear views across the sea to Nisyro. The garrison kept watch over the channel and lit a beacon as a signal to Rhodes and the other islands if any shipping was seen passing through the strait. 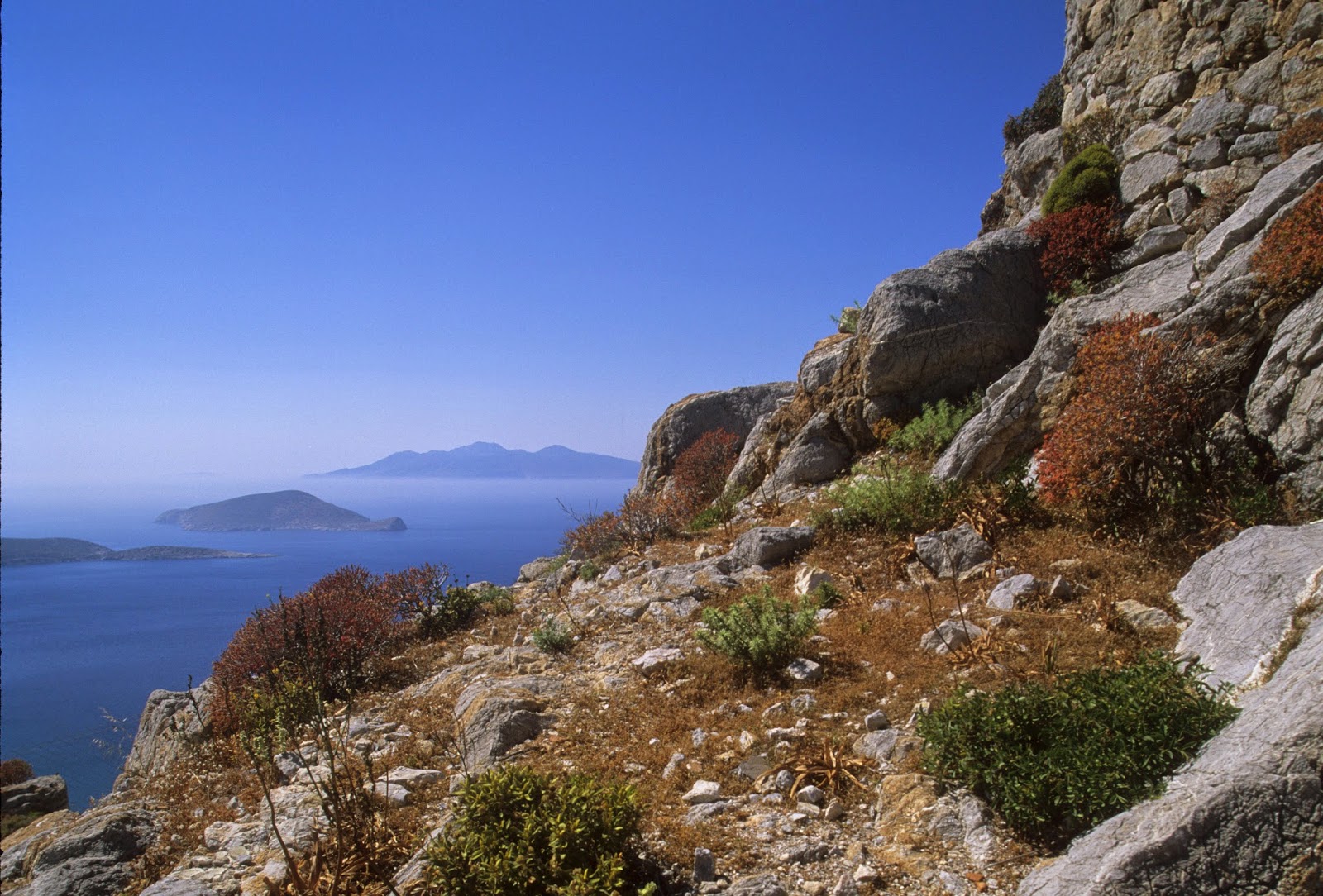 The need for strong defensive positions to protect the population was emphasized c 1317 when Orcan, son and successor to Osman considered Rhodes to be defenseless in the absence of the rival masters and the division of the Order and descended on Rhodes, in the process capturing Piskopi. He used the island as a depot  for the settlers he brought in his train and sailed on to Rhodes. However Orcan's fleet was defeated by the Vicar-General Gerard de Pins and the Turkish colonists on Piskopi were either put to the sword by the victorious knights of sent into slavery.
Posted by Jimmy Graham at 04:32 No comments:

Street of the Knights, Rhodes

When the Convent (headquarters) of the Order of St John was transferred from Cyprus to Rhodes in 1310, the knights reserved the collachium for their own use. Those Greeks who had been living there were moved out as part of the terms of their surrender. The collachium was a separate enclave within the city, divided from the larger town by a high wall running from near the Sea Gate to near the d'Amboise Gate. The wall was protected by strong towers and from 1475, by a moat in front of the wall. The collachium was well guarded;  during Carnival nobody wearing a mask was allowed in. The Knights were only permitted to go into the town when riding a horse, or in pairs if on foot.

To begin with the Convent made use of existing buildings. But as the fledgling state became established it embarked on its own ambitious building programme. Most of the surviving medieval buildings in Rhodes date from the late 15th century, an austere style that manages to combine the ethos of a religious Order of the Church and at the same time reflect the prestige that attached itself to the capital of the Hospitaller State.

Brown sandstone facades  are embellished  by white marble plaques in which coats-of-arms are carved in relief. Some buildings  have decorative carving around the windows and doorways.  One of the most characteristic elements of the Knights' buildings on Rhodes are the  strongly marked string courses. A few of the doorways are  Renaissance in style but the majority are Gothic. However in the architecture of the Convent's buildings it is the east that predominates over the north; most of the buildings are low, without gables and have flat roofs.

The first major building project on Rhodes was the construction of the Conventual Church of St John, in a prominent position in the town, opposite the Palace of the Grand Masters. Like most of the Knights' churches, in the Gothic style but  incorporating Classical masonry in its fabric.The granite columns that divided the nave from the aisles in St John's were taken from the site of an ancient temple while the tombs of Grand Masters' de Juillac(1376) and de Milly (1441) were reused ancient Greek sarcophagi. St John's was accidentally blown up in 1856 and all that remains, apart from the foundations, is the reconstructed Loggia that connected the Conventual Church with the Palace. The Loggia or Circus sive Lobia Conventus was where every knight had to perform gun drill at least once a week. It  crosses the top end of the main thoroughfare running through the Collachium known today as the Street of the Knights. 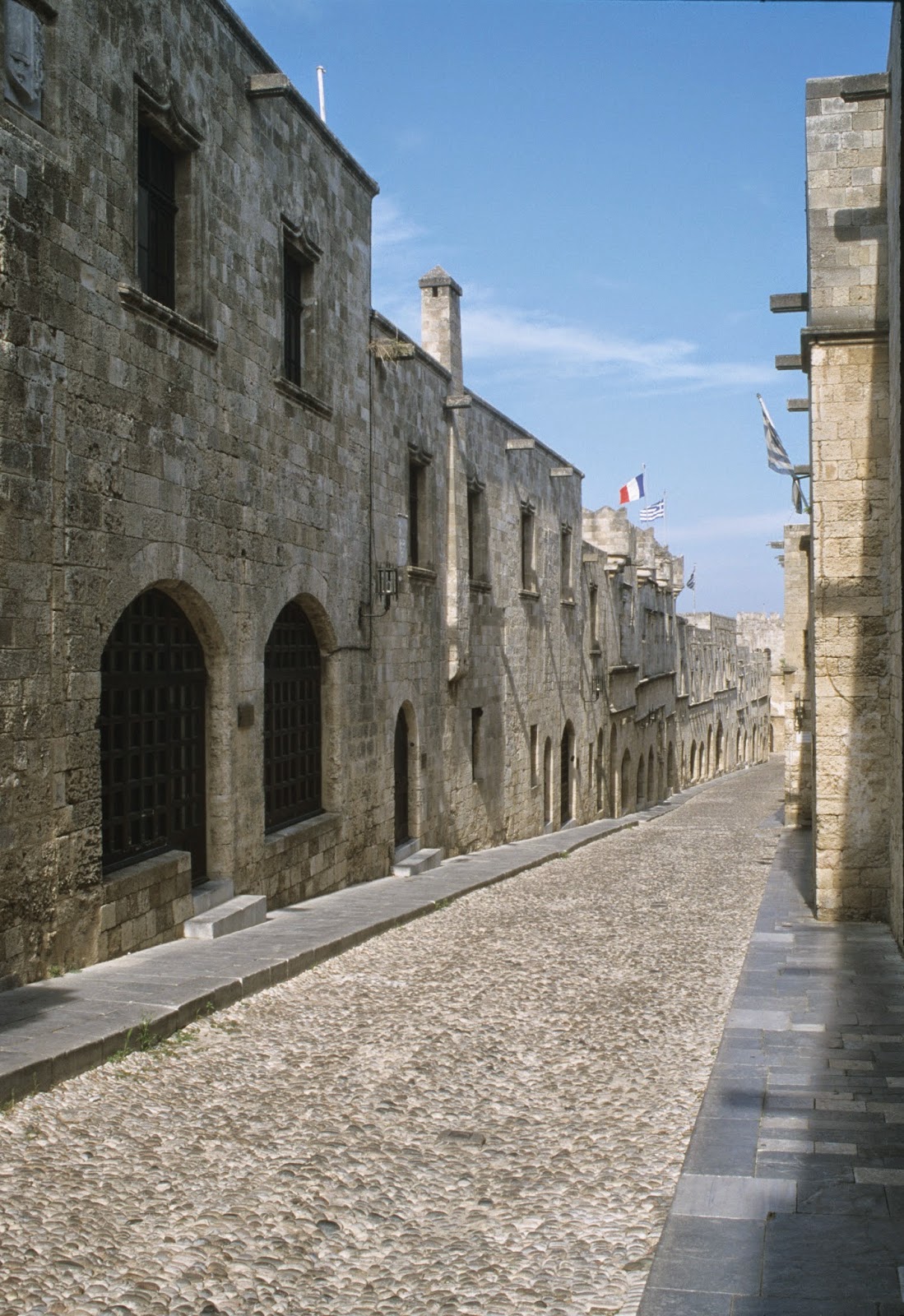 The Street of the Knights is the grandest street in Rhodes. Along it were most of the auberges or national inns belonging to the different langues. The period that the Order stayed on Rhodes was formative in developing the structure that was to last for most of its subsequent history. What had begun as a largely informal practice on Cyprus became the formal division of the brothers serving at headquarters, the Convent, into their national groups. To begin with there were seven langues at the Convent, ranked according to seniority, Provence, Auvergne, France, Italy, Aragon, England and Germany.

The balance of power within the Order caused internal friction during the rule of Grand Master de Lastic (147-1454). The predominant power of the French contingent gave them the majority of the important posts in the administration and this naturally caused resentment within the other national groups. At the General Chapter of 1461 convoked by Grand Master Zacosta a Spanish Knight, it was decided to split the Langue of Aragon into two, one part retaining the old name and rank while the other was named the Langue of Castille and assumed eighth place in the order of precedence. 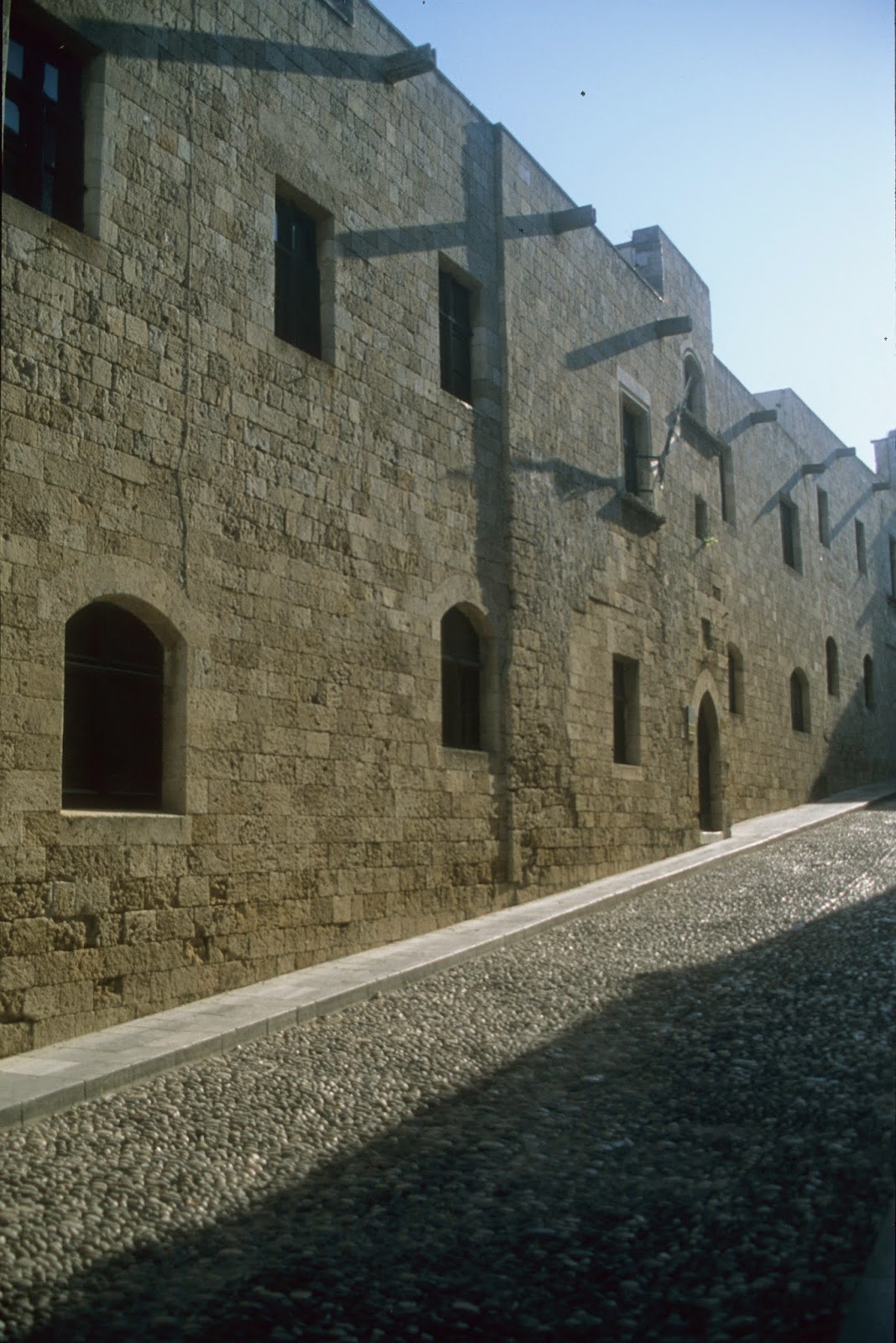 Each of the langues had its own inn or auberge at Rhodes, most of them along the Street of the Knights. The size and development of each langue's inn or auberge depended on the size of each nation's representation at the Convent. The largest inn belonged to the Langue of Aragon which had the largest number of knights, while the inns of Provence, Auvergne and France were also sizable.

While the knights lived in their own houses elsewhere within the collachium, the inns were where they participated in communal life;  dined together, exchanged the gossip of the day and entertained visitors from Europe. The only members of the langue who lived at the auberge were the novices and junior knights who would have slept in a communal dormitory with in the auberge. While the auberges  project a  plain facade onto the street, many of them have an open gallery at the back that overlooks a private garden.

Near the top of the Street of the Knights part of the Auberge of Provence survives including the magnificent entrance and some parts of the ground floor. The Auberge of Provence was badly damaged in the earthquake of 1481 and was subsequently rebuild at the expense of the munificent Prior of Saint-Gilles, Fra' Charles Amen de la Rochechvaut. 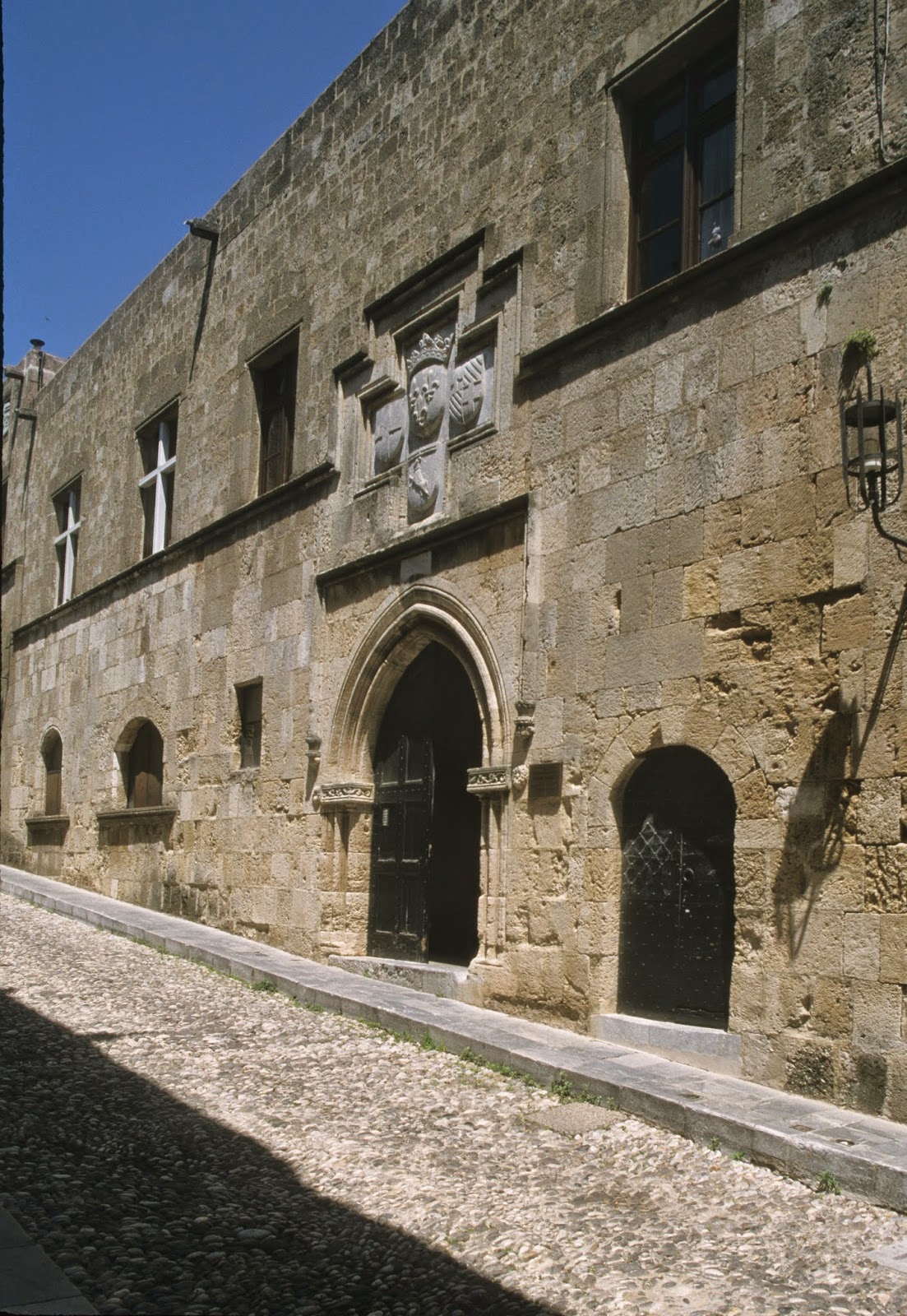 Set above the door is a cruciform frame enclosing the arms of the King of France, the Order, Grand Master del Caretto (151-1521) and Fra' F de Flota. 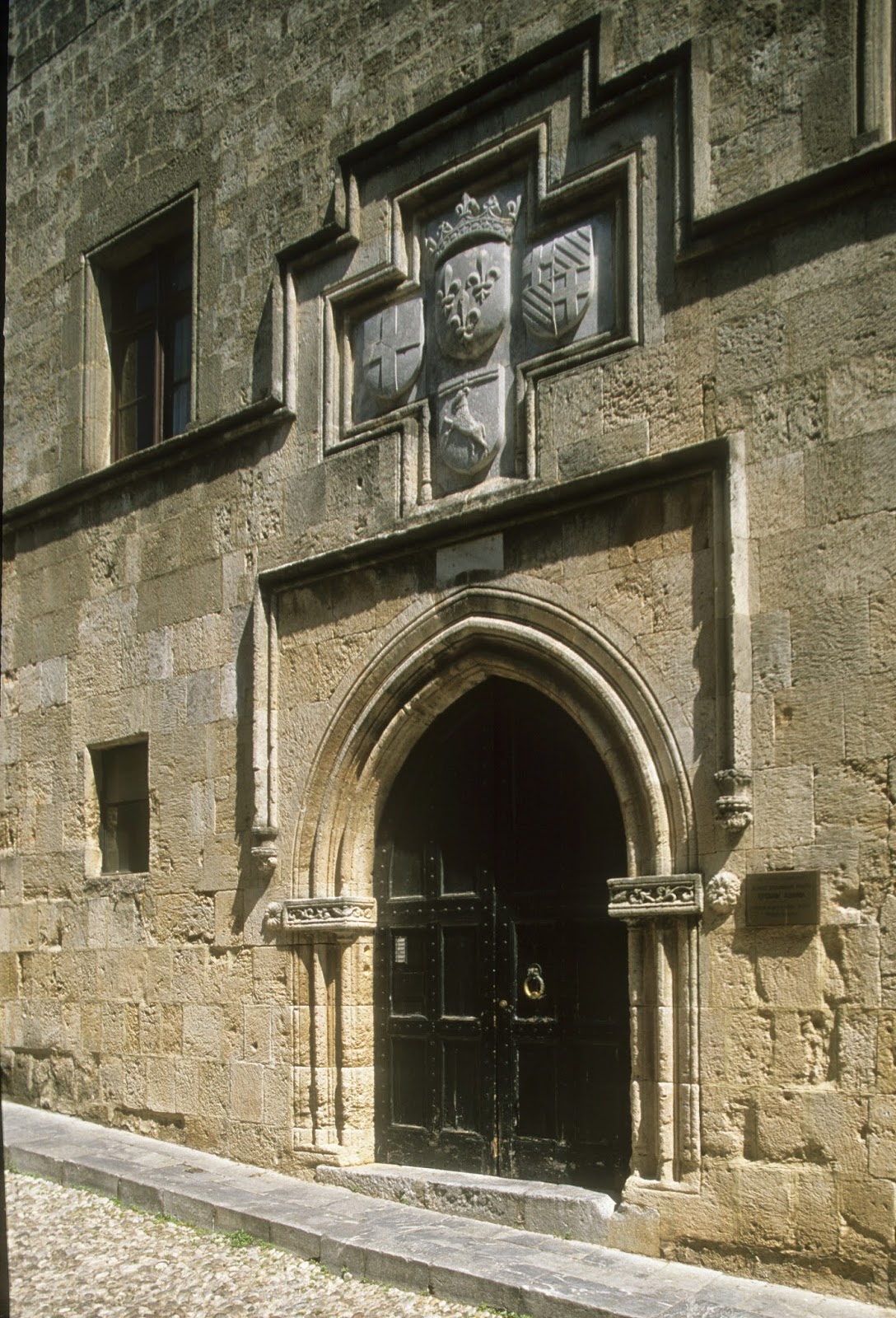 Opposite the Auberge of Provence on the southern side of the Street is the Auberge of Aragon, the largest auberge on Rhodes.A large doorway in the Aragonese stylle  leads into a barrell vaulted passage from where a stone staircase leads to the principal accomodation on the first floor. Besides five of six smaller rooms is a large hall measuring 19x8m at the front alongside the street which was the assembly chamber of the Spanish knights. 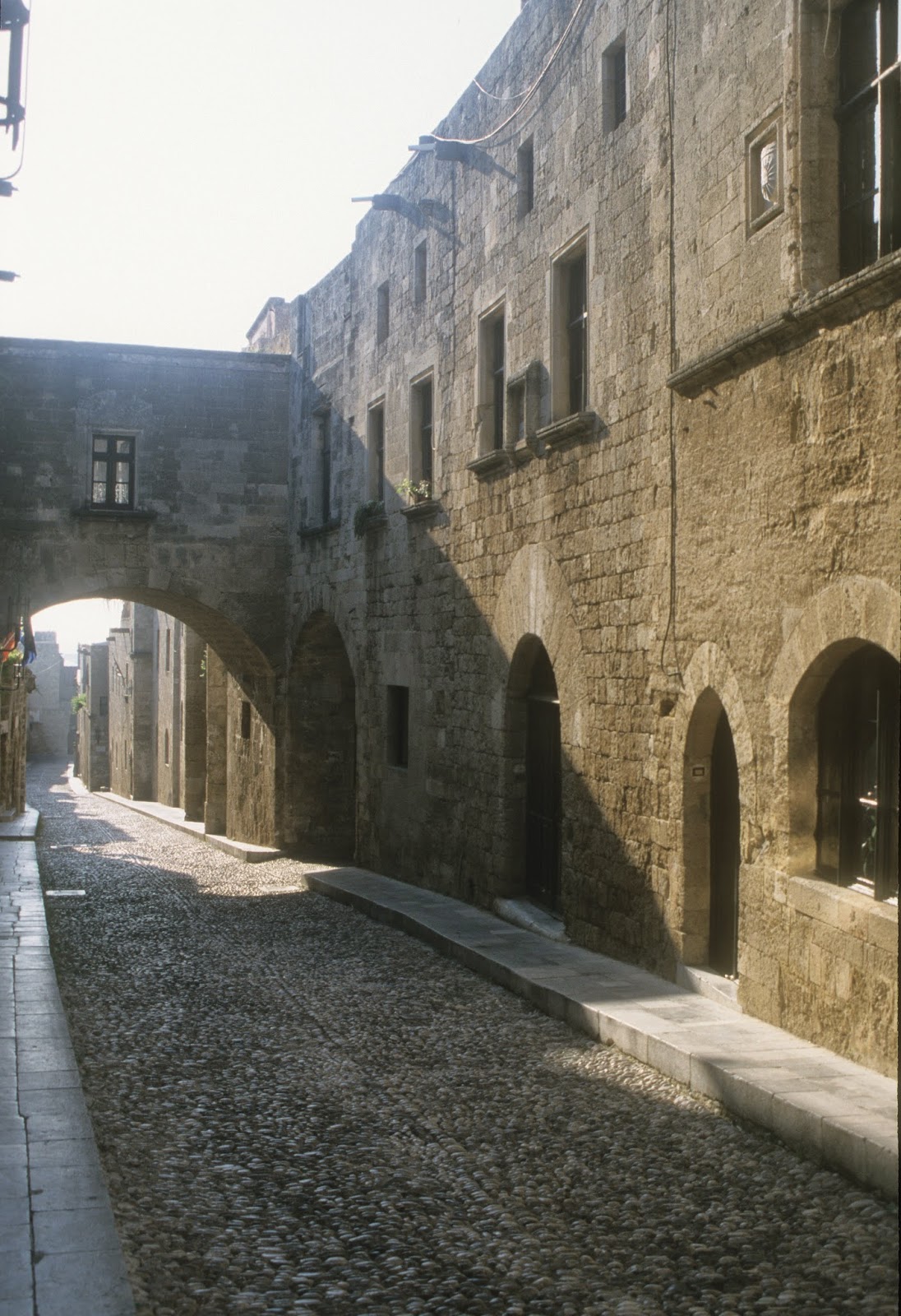 From the hall is a passage over the street to the building opposite that may also have belonged to the Inn of Aragon. The escutcheon on the facade belongs to Grand Master Fluvian (1421-1437). After the division of the lange in 1461, the Langues of Aragon and Castille continued to use the same building. 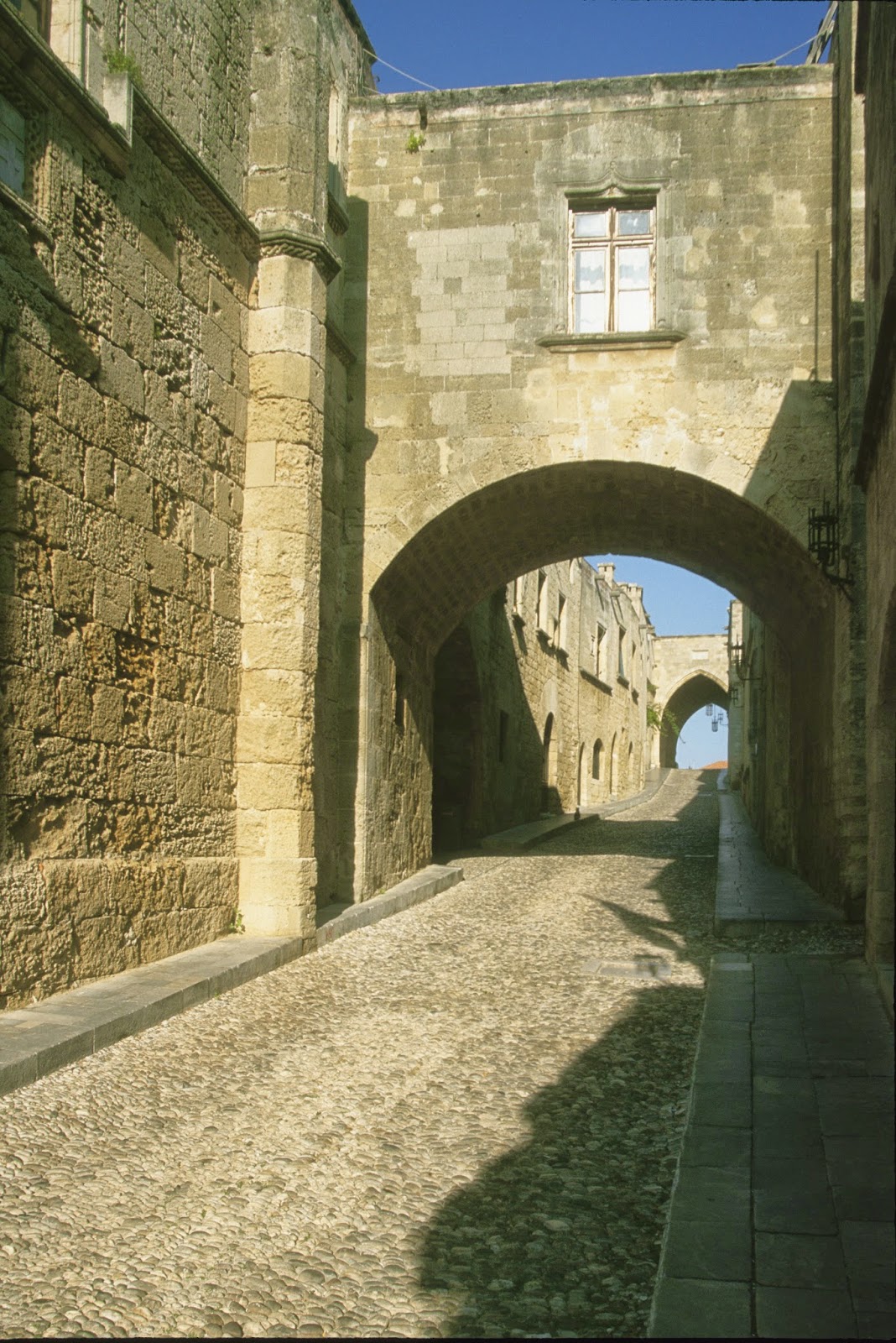 One of the most imposing inns is the Auberge of France in the Street of the Knights. On the facade two mouldings follow the gradient of the street, the string course separates the ground floor from the upper story . The upper moulding skirts the windows which are decorated with a twisted rope design. Rain water was shed from the roof as the street through conical waterspouts in the form of crocodiles. At the top of the inn is a parapet with battlements, interrupted at intervals by 4 semi circular turrets. Inscriptions on the facade and internal arcade record the names of the founders and the different building phases. Like most buildings on Rhodes the Auberge of  France dates from after the Siege of 1480 and the earthquake the following year. 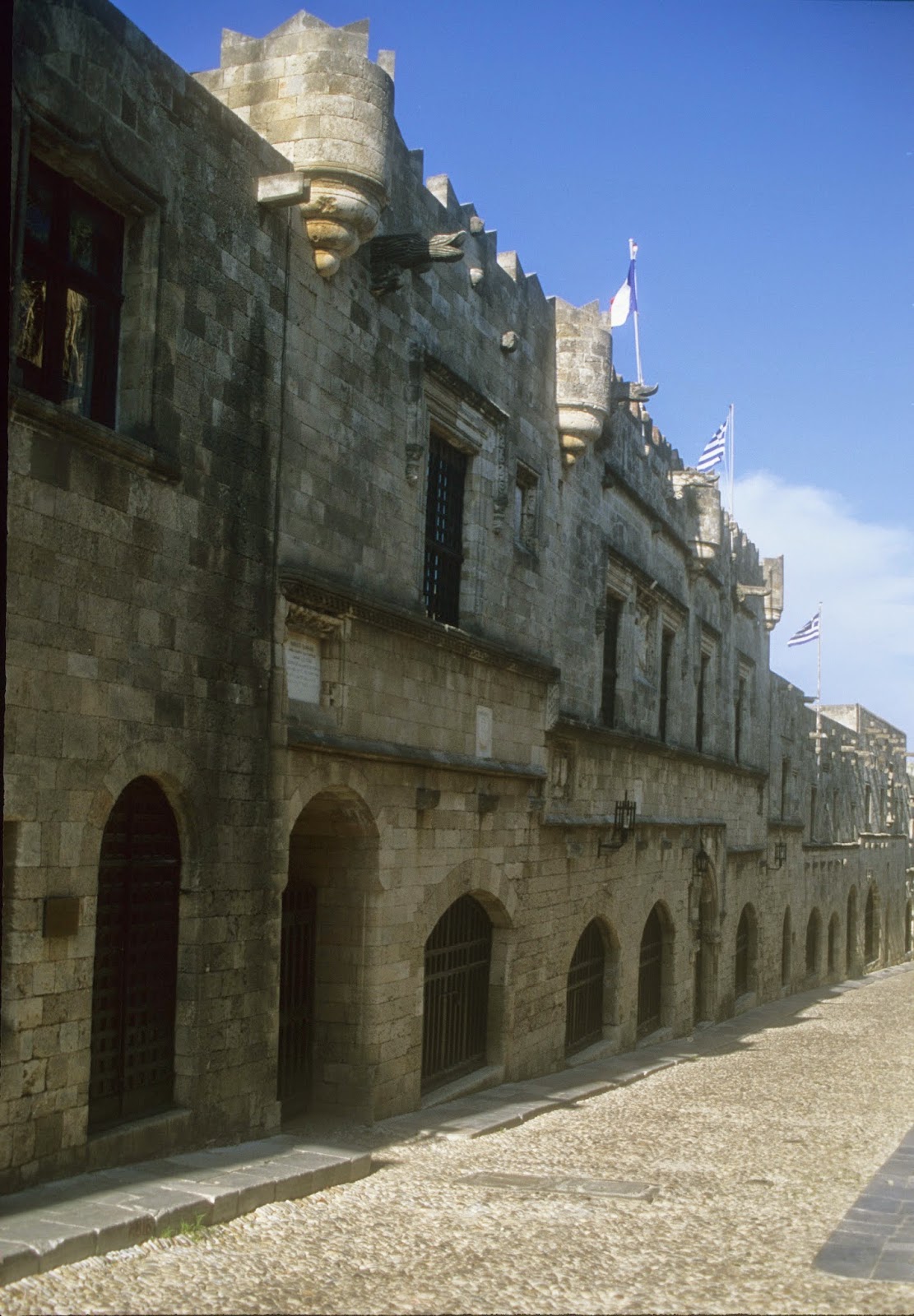 The Inn of Italy at the bottom of the Street is a small building in relation to the number of Italian knights serving at the Convent. A small entrance leads to courtyard with a well; every inn had its own donkey drawn well. On the bottom corner of the Street of the Knights is the magnificent Sacra Infermeria completed in 1483.