Clock at the Palace, Valletta

The ornamental clock on top the turret of the smaller courtyard of the Magistral palace in Valletta was created for Grand Master Fra' Manoel Pinto de Fonseca (1741-1773).

The clock has four dials; the main one in the centre shows the hours and minutes; above it  a smaller one registers the phases of the moon. To the left a small dial shows the month while another on the right shows the date.

On top of the turret are four bronzes representing Moorish slaves holding hammers which they swing to strike the gongs. The central two figures are larger than those at the sides, as is the gong they strike with their hammers. On either side of the large central gong are two smaller ones. 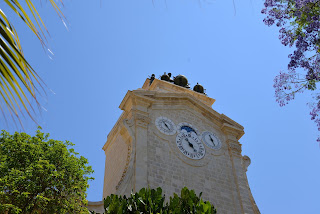 The Moorish slaves on the sides strike every fifteen minutes, once each, twice each and three times each , until the hour is complete. Then they strike four times in rotation before the two larger figures take their turn striking the central gong, once, twice, etc according to the hour up to twelve.

The turret is flanked by pilasters and volutes and surmounted by a broken pediment. The weights that wind the clock hang within the turret. 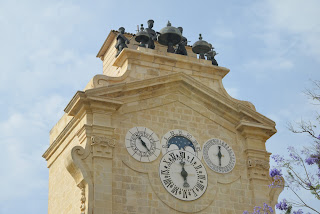 The clock first started to work on Tuesday 22 June, 1745 and has done so ever since.

The position of the clock was chosen carefully, from its high position on the turret it's chimes could be heard across the city.