The Dwerja tower (also known as Qawra tower) was completed in 1652 during the reign of Grand Master Fra' Jean Paul Lascaris de Castellar (1636-1657) but it was built at the expense of the Universitas of Gozo (the local government). The tower formed part of the network of coastal protection of the Maltese islands and commands views over the sea passage from North Africa to Sicily. 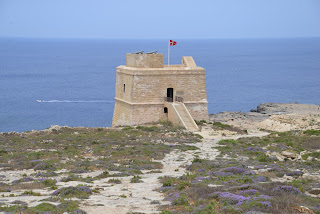 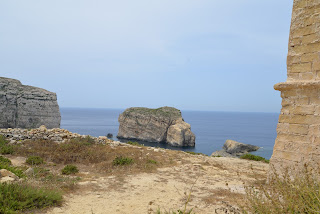 The tower is 12 m square and its walls are 3.5 m thick. The lower floor is cut into the living rock and has a large rock cut well. The middle floor provided living accommodation for the guards while the small room on the roof was the powder store. 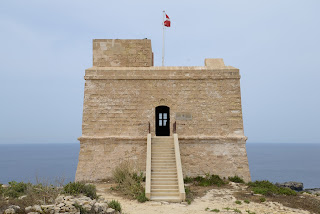 Access to the roof is via a stone staircase on the east side of the tower. 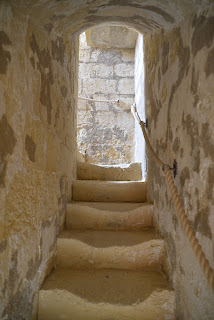 The tower was manned by a Capo Maestro, or bombardier or his adjutant, together with two other guards whose wages were also paid by he Universitas. The bombardier was able to supplement his income from the sale of salt collected from the nearby pans. The tower was armed with 3 six pound canon, swivel guns muskets and spontoons (pikes) provided from the armoury of the knights of St John. There is however no record of any of these weapons being fired in anger.
Posted by Jimmy Graham at 04:29