The convent of Sijena was the most prestigious house of Hospitaller nuns in Europe.  A royal convent, it was founded by Queen Sancha of Aragon  in 1183. Queen Sancha herself and her daughter Dona Dulce both took the veil there. Sijena  also became the burial place of members of the royal family, including King Peter II after he was killed at the battle of Murat in 1213. Dona Sancha herself died at Sijena and was interred in a tomb before the high altar. The Prioress of Sijena exercised great power within the convent's dominions which covered  almost four hundred square miles. Nowhere was Sijena's prestige better reflected that in the legendary chapter house whose walls were said to have been covered with the most impressive early 13th Century frescoes to be seen anywhere in Europe. 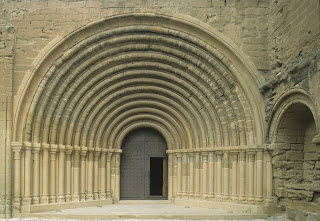 Sijena's prestige increased further still during the reign of James II (1291-1327) when his daughter Dona Blanca was appointed prioress,  at the age of nineteen, and the convent was given the right of coinage within its own dominions. She built a new prioral palace with a magnificent throne room and developed Sijena into a royal residence. The choir rose to more than 100 nuns, drawn from the most noble families of the kingdom who entered the convent with  retinues of servants and built themselves private apartments that famously perched haphazardly over the convent.

The nuns wore linen rochets and carried silver sceptres. Dona Blanca herself enjoyed frequent absences at court and allowed the nuns the same freedom to travel, which their dowries permitted them to do in great state. With the extinction of the Royal House of Aragon in 1410 seven of the nuns resident at Sijena were members of the royal family. 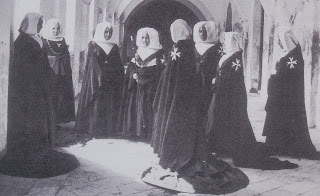 The privileges of Sijena declined with the extinction of the royal house that had founded it.

With the fall of Malta to Napoleon the King of Spain imposed his own rule over the four Spanish priories. When the Treaty of Amiens threatened to restore their independence he king promptly converted them into the the royal Order of St. John, by a royal decree of January 1802. After the first Carlist War (1833-1839)i the governement of Queen Isabella confiscatedall church property, and so Sijena lost all of its possessions, the monastry itself was sold, and although the buyer allowed the nuns to remain they were forced to subsist on their own dowries. The nuns did eventually manage to regain possession of their house, but not their estates.

The nuns of Sijena continued their traditional way of life until the outbreak of the Civil War, when a group of republicans from Barcelona set fire to the convent destroying all the magnificent tombs and buildings adorned over centuries. An order of French nuns has established a community in the ruins.