The preceptory of Garway in the Monow valley had been the main house of the Order of the Temple in Herefordshire. Granted to the Templars by Henry II c.1185-1187 he gave them the right to asssart 2000 acres in the Archenfield forest which had been the Crown's possession  since the revolt of Roger de Breteuil, Earl of Hereford (in 1072). In due course Garway became an important manor and administrative centre responsible for their property throughout the dioceses of Hereford and Llandaf. It is probable that the church at Garway dates from after 1162 when the Order was permitted to have its own chaplains. Originally the church was built with a circular nave in imitation of the Church of the Holy Sepulchre in Jerusalem. (The foundations of the circular nave were unearthed during excavations in 1927).

The Knights of Rhodes took over the former Templar estate at Garway in 1324. As soon as they arrived the Hospitallers began a programme of building and restoring the infrastructure of the property which had fallen into disrepair after the departure of the Templars in 1307. The nave of the church, the chancel, font and the upper storey of the tower all date from the Hospitallers' rebuilding. 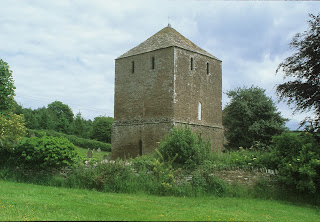 The church of St Michael at Garway  was used by both the Hospitaller community and as the parish church. Seating was provided in the chancel for use by members of the Order and its officials. No seats were provided for the lay congregation who stood or knelt on the floor strewn with rushes of other hedgerow plants. However there was a stone ledge against the nave walls where the elderly and infirm could sit, giving rise to the saying "let the weak go to the wall."

After Garway had been transferred to the Knights of Rhodes it lost its status as a preceptory or commandery and became a camera of the commandery at Dinmore. However Garway continued to function as a separate unit of administration and remained a commandery in all but name, in 1338 it was in the charge of a keeper,Brother William Dalmaly, a chaplain of the Order. The estate had become an extensive manor with a demesne of 720 acres of arable and 60 acres of meadow. 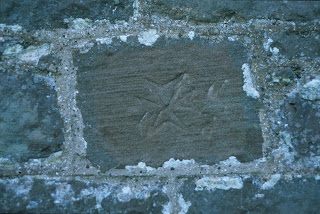 There were officials including the chamberlain, bailiff and seneschal  and numerous servants. The scale of the establishment at Garway in those days can be gauged from the numerous servants who included cooks, bakers, porters, personal servants of the keeper and two attendant pages and the reaper of the manor who was responsible for the allocation of labour services of the villeins living on the demesne (home farm). In 1338 all the servants on the estate were in receipt of wages varying from 3/4d to 13/4d a year.

There were also three holders of corrodies or pensions living at Garway in 1338, one of whom Gilbert of Pembridge dined at the table of the brethren and received a pension 20/s a year while the other two received 10/s and ate at the table of the free servants. Due to the establishment's position on the Welsh marches there was a steady stream of visitors and wayfarers who made heavy demands on the houses's hospitality.

There are no remains of the domestic buildings at Garway with the exception of the circular dovecot. According to the inscription over the door "Anno domini millesimo tres entesimo vic esimo sexto factum fuit istud columbare frrem Ricardum." "In the year 1326 this dovecot was built by Brother Richard." Outside is a projecting string course high above the ground to prevent rats from getting in. Inside there are 666 nesting boxes arranged in 19 rows. 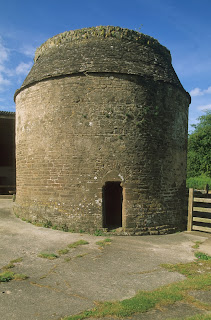 It had been a custom or the Bishop of Hereford to make a triennial visit to the parish church at Garway, recieving on each occasion 53/4d in respect of procurations, but in 1524 the parishioners memorably barred the door to him, refusing to ring the bells. In consequence the bishop retaliated by placing the church under interdict and excommunication all those who had barred his entry.