Fort St. Agatha, also known as the Red Tower was built by Grand Master Lascaris in 1647. Work was completed on the tower which stands high on the Marfa ridge in 1648 and  fitted with artillery in 1649. At that time it was the furthest fortified outpost from Valletta. Fort St. Agatha is square in plan with four square corner towers that rise from the scarped wall of the lower cordon. The single floor of the tower is formed by two barrel vaulted rooms that stand on top of the lower cordon and is entered through a central door. A spiral staircase in the wall, nearly 14 feet thick leads up to the flat roof which acted as a gun platform and a place from which signals could be sent to and from Gozo, via St Mary's Tower on Comino. In the General Alarm of 1722, Fort St. Agatha was garrisoned by 49 men and armed with five cannon. 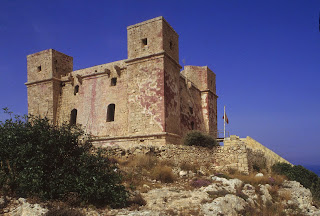