After the Knights of St John left Rhodes on the 1st January 1523 the exiles sailed first to Candia (Crete) and then on to Messina on Sicily where the Emperor Charles V had offered them sanctuary. However an outbreak of  the plague at Messina forced the Knights to re-embark and after a short stay at Baia they sailed on to Citta Vecchia in the Papal States.

Grand Master de L'Isle-Adam  took the opportunity  to visit  Rome where he had an audience with the Pope Adrian VI who received him with great pomp and ceremony. When Adrian died soon after his visit, the Grand Master and the Knights were chosen to  guard the conclave where Adrian's successor would be chosen. From the Knights' point of view  the outcome could not have been better with the election of Cardinal Fra' Giulio dei Medici who became the first member of the Order of St John to become pontiff, taking the title Clement VII..  The Grand Master was offered a residence at Viterbo, while the Order's navy remained at Citta Vecchia.

From the moment the Order sailed into exile, his oath to Suleiman notwithstanding Grand Master L'Isle-Adam  was preoccupied with  the recovery of Rhodes. Yet as early as 1523 the Viceroy of the Kingdom of Sicily, part of the dominions of Emperor Charles V was suggesting that the Order might occupy the Maltese islands and the enclave of Tripoli on the North African coast; to defend them against the Turks who by the early 16th century were challenging Charles V for mastery of the central Mediterranean.Charles V of Spain was the Holy Roman Emperor; ruler of Spain, the Netherlands, Luxembourg, Sardinia, Sicily, the greater part of Italy and the Spanish colonies in North Africa and the New World.

The Grand Master was far from enthusiastic about the offer of Tripoli and Malta. He wanted to return to Rhodes. While in no position to turn down the Emperor, de l'Isle-Adam  played for time by sending a commission to inspect Malta.

What they found was far from promising. The island of Malta was nothing but a barren rock, 20 miles long and 12 miles wide, covered in some places by 3 or 4 feet of earth, but without trees or other vegetation. It was terribly hot in summer, and had no running water and few springs. drinking water was stored in cisterns, and wood was sold by the pound, the preferred fuel being animal guano dried in the sun, or prickly thistles gathered in the waste ground, which produced nothing else. There were about 12 000 inhabitants scattered over this rock, who spoke a "sort of Moorish" and who were very poor and miserable, for only by the hardest toil were they able to raise enough grain to keep them one-third of the year. There was a small fishing village, the "Borgo" with an old fort called St Angelo, on the north-east coast, and an "old deserted town" on an eminence 7 miles inland; and the island was exposed to frequent raids from the Barbary Corsairs, who periodically burned and pillaged the villages and carried of large numbers of the inhabitants into slavery.

There was only one favourable item in the report of the commission; Malta possessed two good harbours, with an excellent bottom for anchorage, separated by a tongue of land on which a fort could be built for their defence, and with numerous little inlets which would afford shelter for the galleys when the winds blew into the big harbours; and the island rock was tender and easily quarried for building purposes.

On 24th March 1530, Charles V, being near Bologna where he had gone to be crowned Emperor by the Pope signed the deed endowing the Sovereign Order of the Knights of St John of Jerusalem  -late of Rhodes- with Malta, Gozo, Comino and Tripoli, "to be held in fief noble, free and franc from military service," and with all the jurisdiction and authority, political and military. 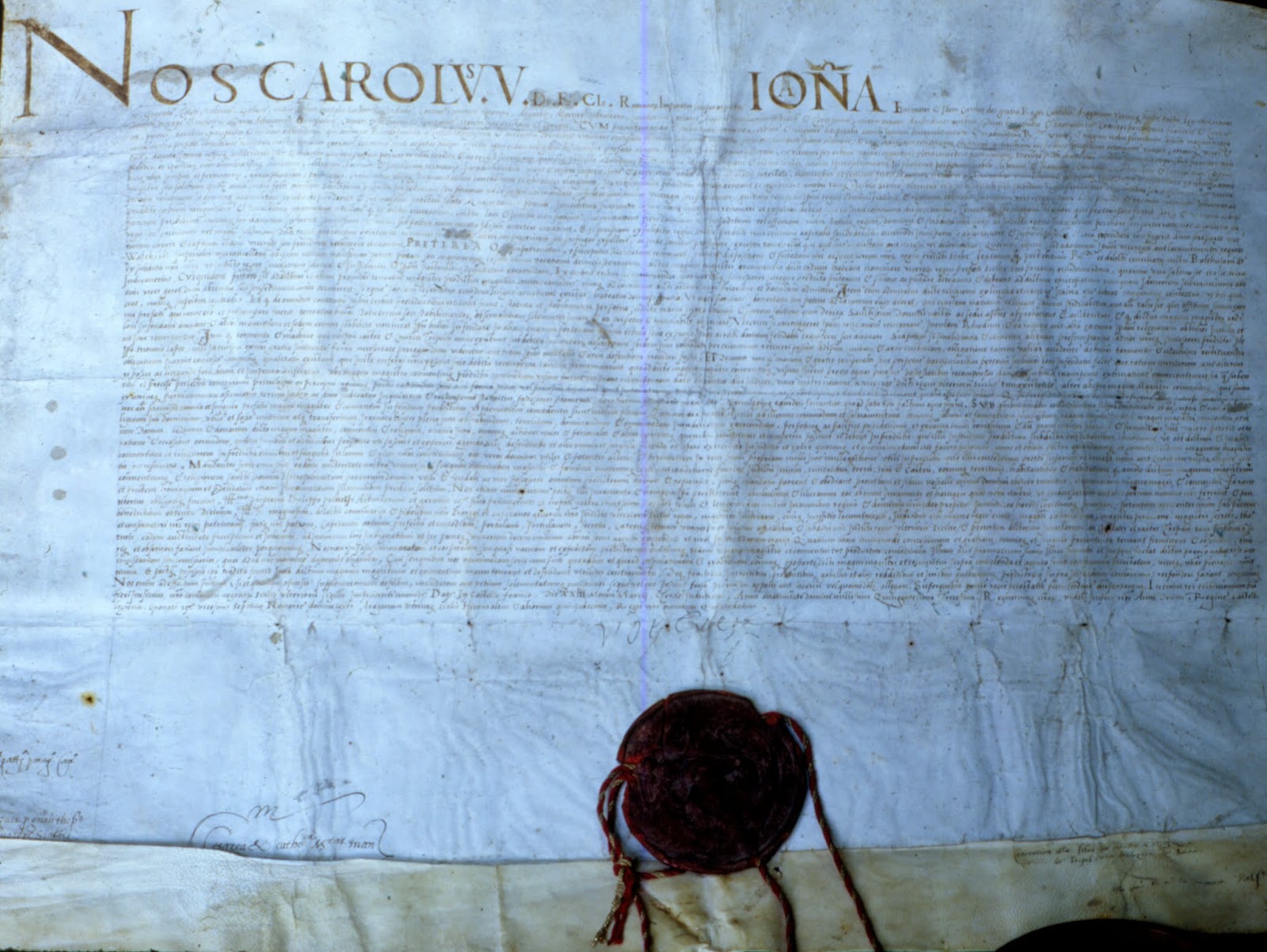 "In order that they perform in peace the duties of their Religion for the benefit of the Christian community, and employ their forces and arms against the perfidious enemies of the Holy Faith.....we have voluntarily determined on granting them a fixed home out of the particular affection we bear the Order, that they may no longer by necessity be compelled to wander about the world.....We grant and bountifully bestow upon the afore- mentioned very reverend the Grand Master of the Religion and Order, jurisdiction over these forts and islands with high and low justice, property rights...power of life and death, exempt from service of war and all services of vassals, and that all who may be now dwelling or shall hereafter dwell dwell in said islands, places and castles....under whatsoever order, quality and condition, shall receive and consider the Grand Master as their true and feudal lord....and shall perform and obey his behests as good and faithful vassals should always obey their lord."

The Maltese people were not happy about Charles V's gift of their islands. While Malta and Gozo had been part of the Royal domain of Sicily for over four centuries Malta had largely run her own affairs. In 1428 King Alfonso V of Aragon had confirmed their ancient privileges  and paid 30 000 gold florins which was the sum that the monarch had pawned the islands to Don Gonsalvo Monroy, and how that day he had sworn on the four Gospels that they would never be transferred to another sovereignty. On learning of the gift the Maltese sent a delegation to protest to the Viceroy of Sicily. But by the time they arrived the galleys of the Order of St John were already in Syracuse, and Grand Master L'Isle-Adam had already been invested with the sovereignty of Malta through his representative, the Bailiff of Monseca.

While technically the Knights may have been vassals of the Spanish king, in reality they assumed sovereignty over the islands. in return the Knights were obliged to fulfill a few modest conditions. Firstly that the Order should swear, never to compel the Maltese to take up arms against the king of Spain and his dominions. Secondly the Knights  had to present a falcon every year, on All Saints Day, to the Viceroy of Sicily. Thirdly, The Order renounced to the King of Spain the right to nominate the Bishop of Malta. He had the right to chose as Bishop one from among three members of the Order chosen by the Knights, one of whom had to be a Spanish subject. Forth, the Admiral of the Order had to be chosen from the Italian members of the Order. Fifthly, the consent of the King of Spain was required to transfer Malta to another power.

The gift was formally accepted by the Grand Master and the complete Council at Syracuse on April 25th 1530. The gift was confirmed by the Pope on May 23rd, on June 10th they received the great Bull of Investiture and finally on July 15th they ratified the Oath.

On 26 October 1530 the Knights of St John sailed into the Grand Harbour of Malta on board their flagship, the Grand Carrack, the " Santa Anna", commanded by the English Knight, Fra' Sir William Weston. She had been built at Nice and launched, on of all days, 1 January 1523, the day the Knights had left Rhodes. The "Santa Anna" was the most powerful ship afloat and one of the earliest armour clad warships. She drew up alongside in what became known as the galley Creek. Grand Master de Isle-Adam raised his standard in Fort St Angelo and the Convent settling in the adjacent village, Birgu.