Narangia Castle, Lango (Cos or Kos)

Lango (Cos or Kos) is the second largest island, after Rhodes, in the Dodecanese archipelago. It had been a part of the Byzantine Empire, held by a duke until 1290 and was inhabited by a largely Greek population. Although Venetian expeditions against the island were defeated by the Greeks, with Turkish help, in 1283 and again in 1284, there had been a degree of Venetian penetration, unlike on Rhodes.

However Vignolo de Vignoli the Genoses pirate was to claim that he had been granted Lango and the nearby island of Lerro by the Byzantine emperor and in May 1306 sailed to Cyprus to visit the Convent of the Order of St. John with a proposal to mount a join conquest of Lango, Rhodes and other islands. De Vignoli's suggestion was well received by the Order, looking for new opportunities in the aftermath of the fall of Acre (1291).

A small force of Hospitallers and Genoese landed successfully on Rhodes in June 1306 but the town itself  held out, with the help of reinforcements from Constantinople.  It was to surrender eventually in August 1309. However in June 1306  two Hospitallers with fifty armed men managed to land successfully on Lango and  went on to capture the town and the castle, which had been in Greek hands.

However in October 1309  intelligence from Crete reached Venice indicating that Lango had been captured by a Venetian force. When Master Fra' Foulques de Villaret reached Rhodes from the West with an invasion force in mid 1310 it seems that the Hospitallers retook Lango and Lerro later on that year. However in the turmoil surrounding  the deposition of Master Fra' Foulques de Villaret in mid 1317  the Hospitallers lost control of Lango between mid 1317-1318, probably as a result of a rebellion from the Greek population.

On 1st March 1319 Pope John XXII at Avignon granted the commandery of Lango to the German knight Fra' Albert von Schwarzenburg, should he recover it from the Turks who he evidently believed to be in possession of the island. Later it was understood that it was the Greeks who had taken back control. Fra' Helion de Villeneuve, master of the Order (1319-1346) retook Lango in 1136. 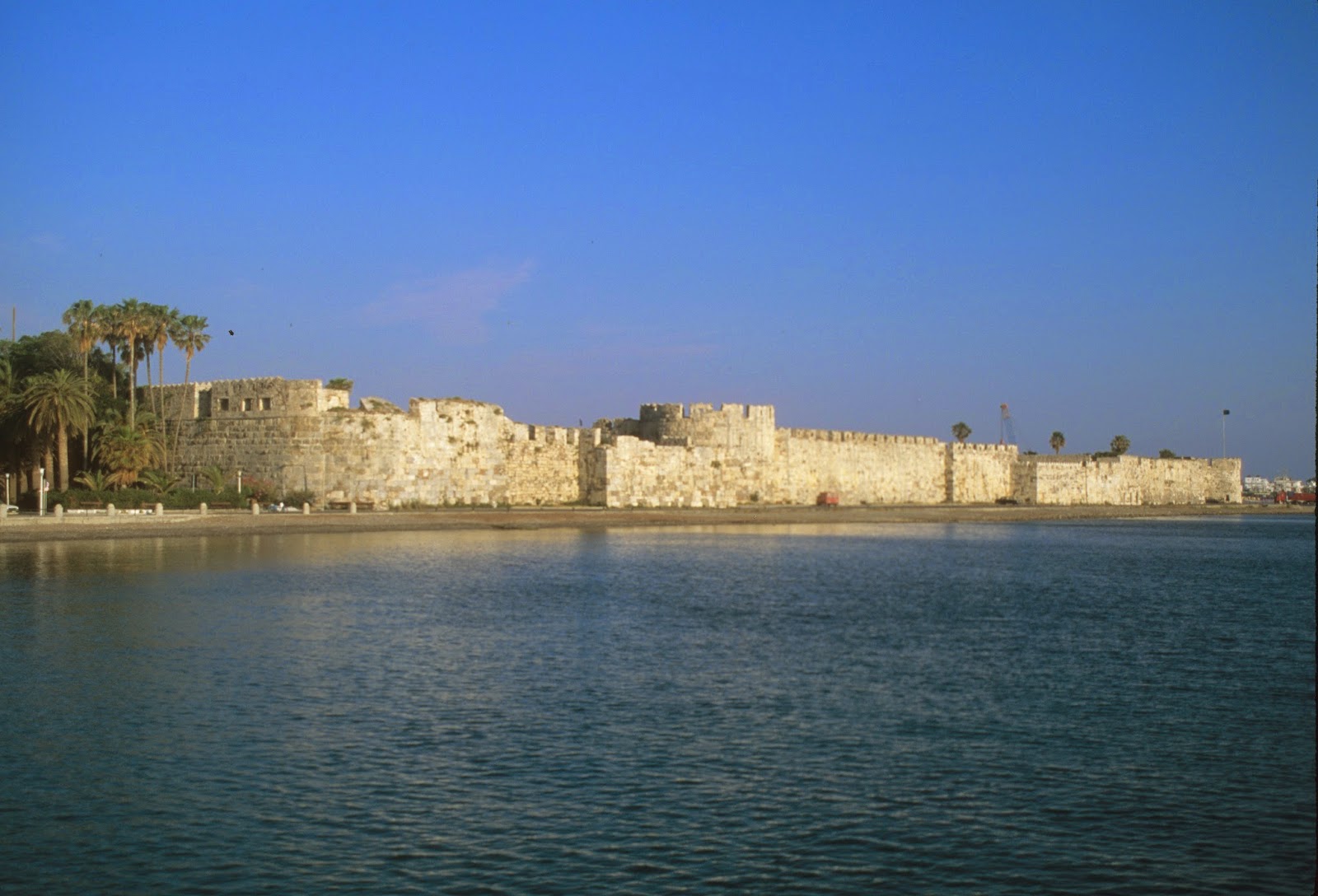 The main stronghold on Lango was the castle of Narangia built on a rocky island at the entrance to the Mandraki or harbour of the main town.  Originally the castle was separated from the mainland by an inlet of the sea crossed by a drawbridge. The original castle, rectangular in plan with four circular corner towers was built by the Venetian Fantino Guerini, governor of Lango (1436-53) and completed in 1478 by the Genoese  governor Edoardo de Caramdino (1471-95). 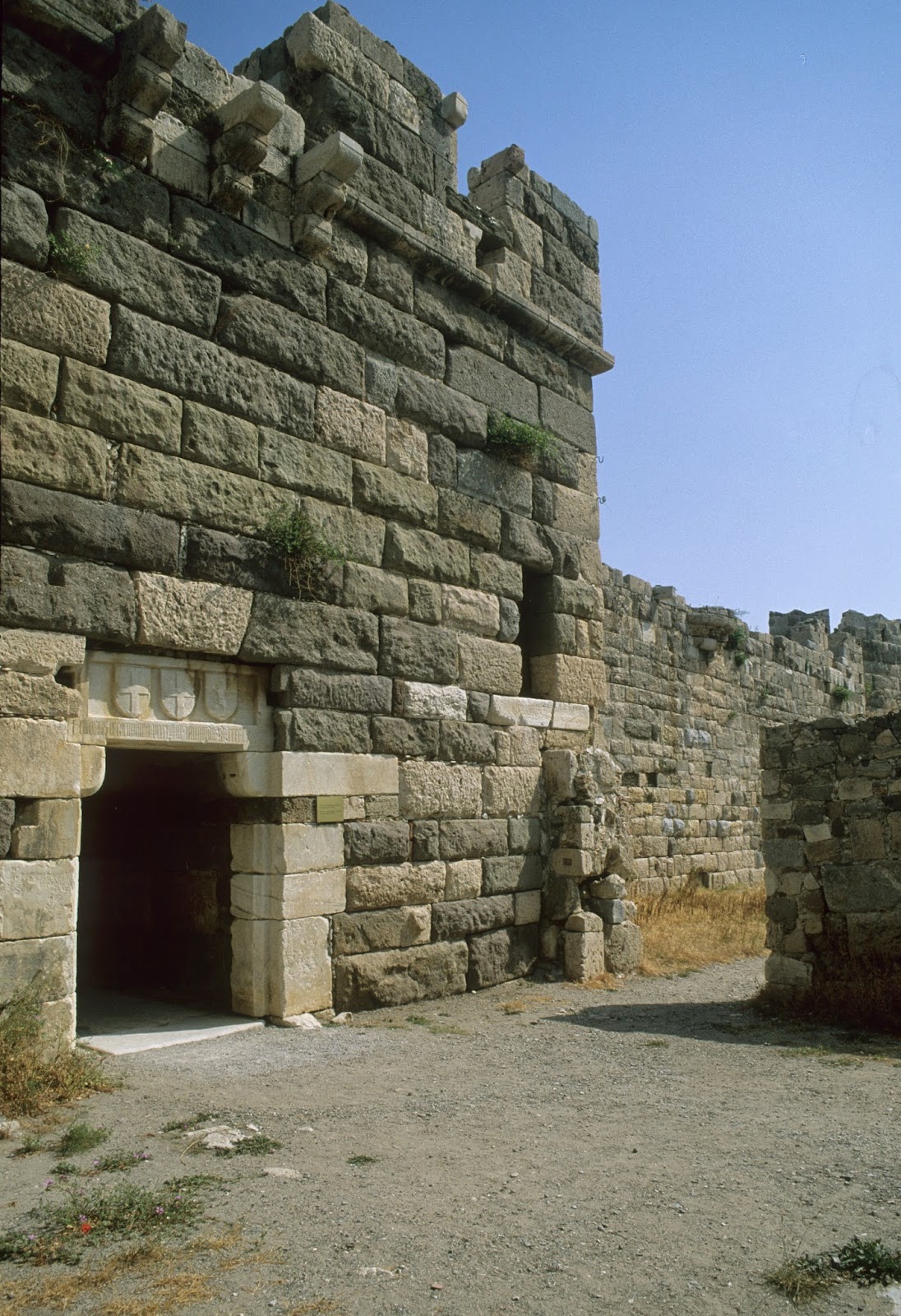 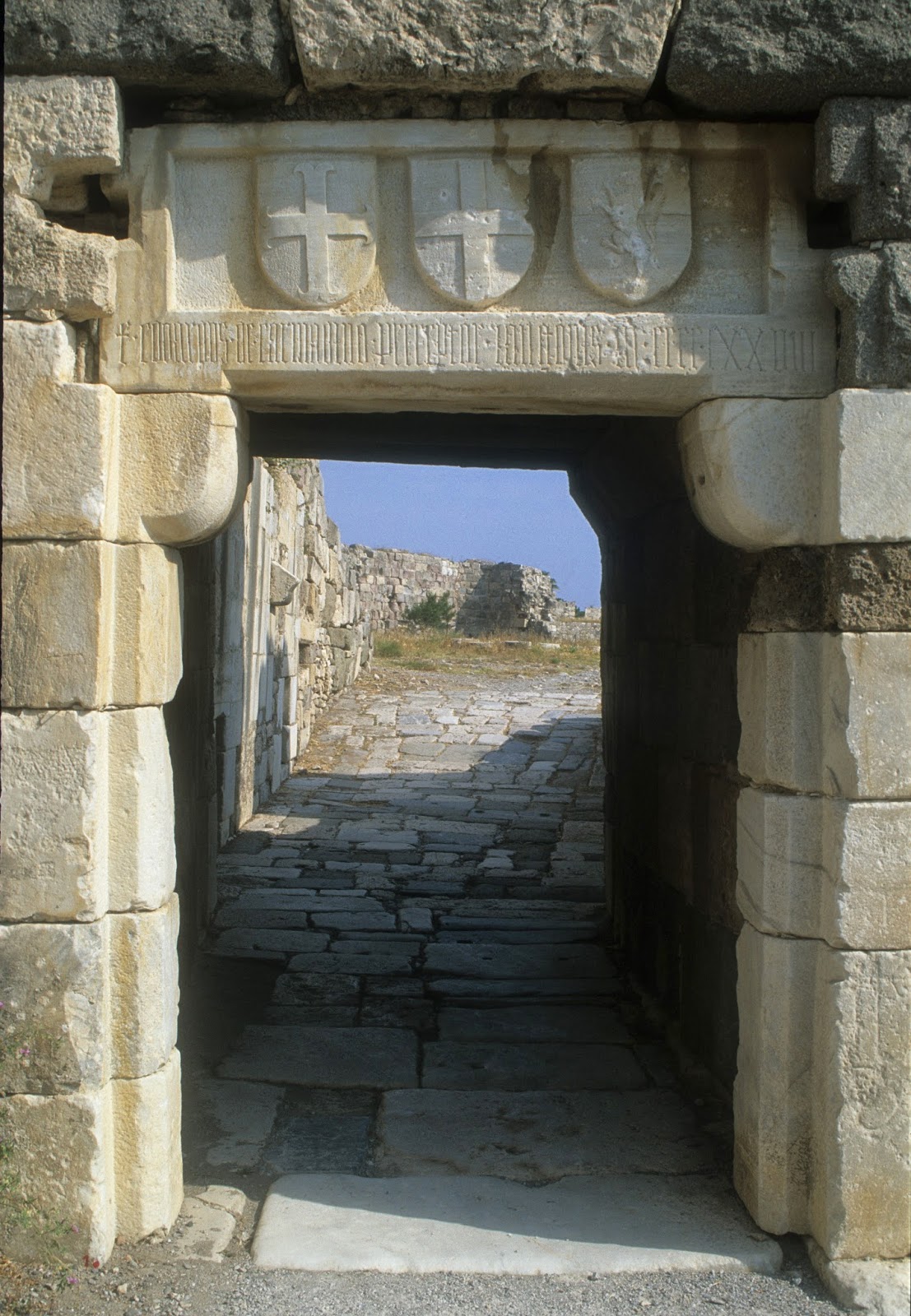 The entrance to the original castle and now the inner enciente is known as the Carmadino Gate, his name is engraved on the lintel. The castle incorporated masonry from Askeplion and other ancient Hellenistic buildings. The ceiling of the corridor uses ten granite columns that probably came from an early Christian basilica that was destroyed by an earthquake in 469. 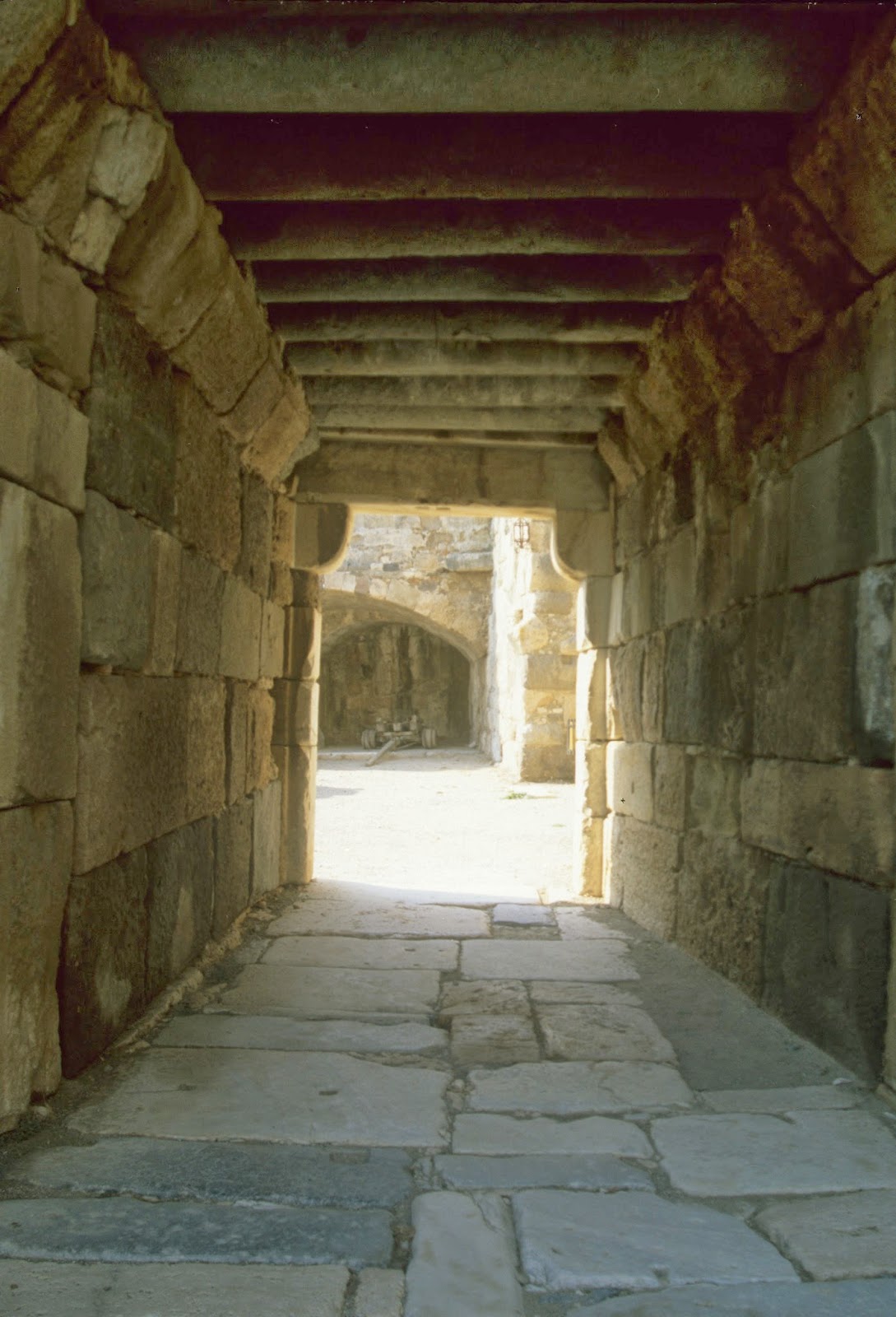 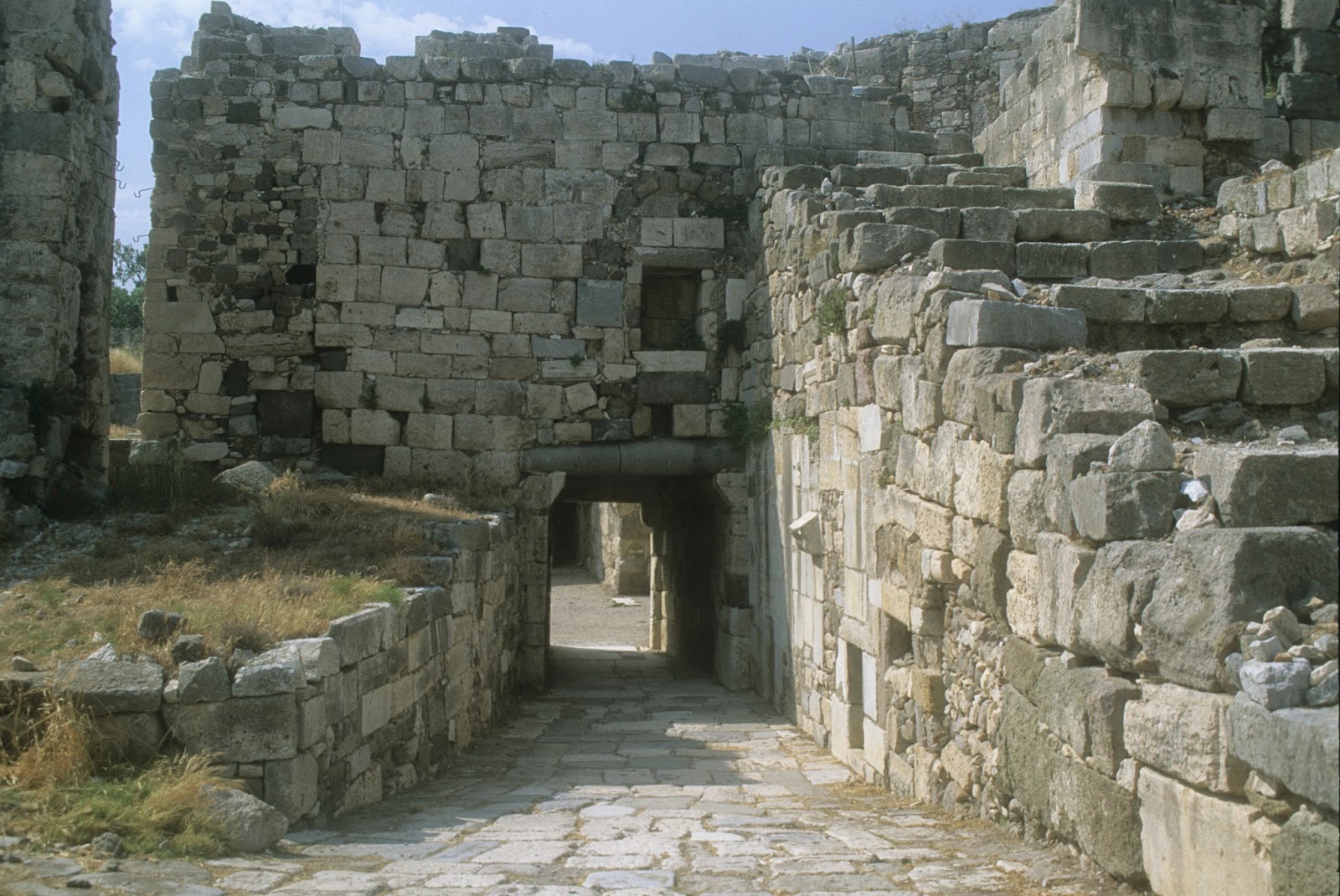 The Turks laid siege to the castle in 1457 during  the magistry of Fra'  Jaques de Milly. On 3rd June a  fleet of one hundred and fifty seven ships arrived off the coast and landed 16 000 soldiers. However after twenty three days they lifted the siege and sailed away. The Turks launched another concerted attack  in 1477 at the beginning of the magistry of Fra' Pierre d'Aubusson but this too was repulsed. 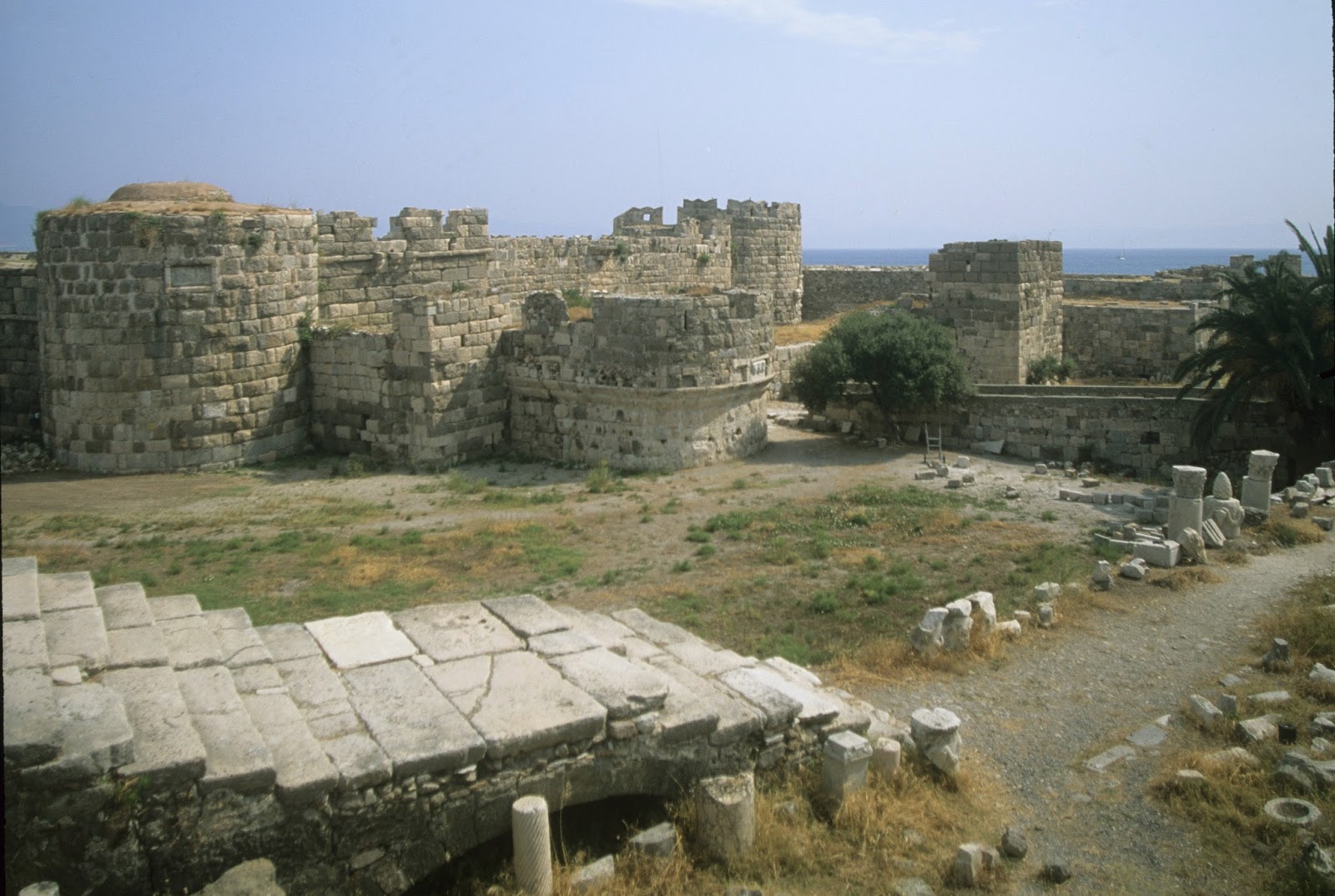 However in the aftermath of the Siege of 1480 when the Turks used gunpowder artillery and after the damage caused by the earthquake of 1493 the knights decided to strengthen Narangia Castle. Work began on the construction of an outer enciente, on three sides of the original castle in 1495 under the direction of magister and hero of the siege Fra' Pierre d'Aubusson (1476-1503), continued under Fra' Amoiury d'Amboise (1503-1512) and was completed in 1514 by Grand Master Fra' Fabrizio del Caretto (1513-1521). 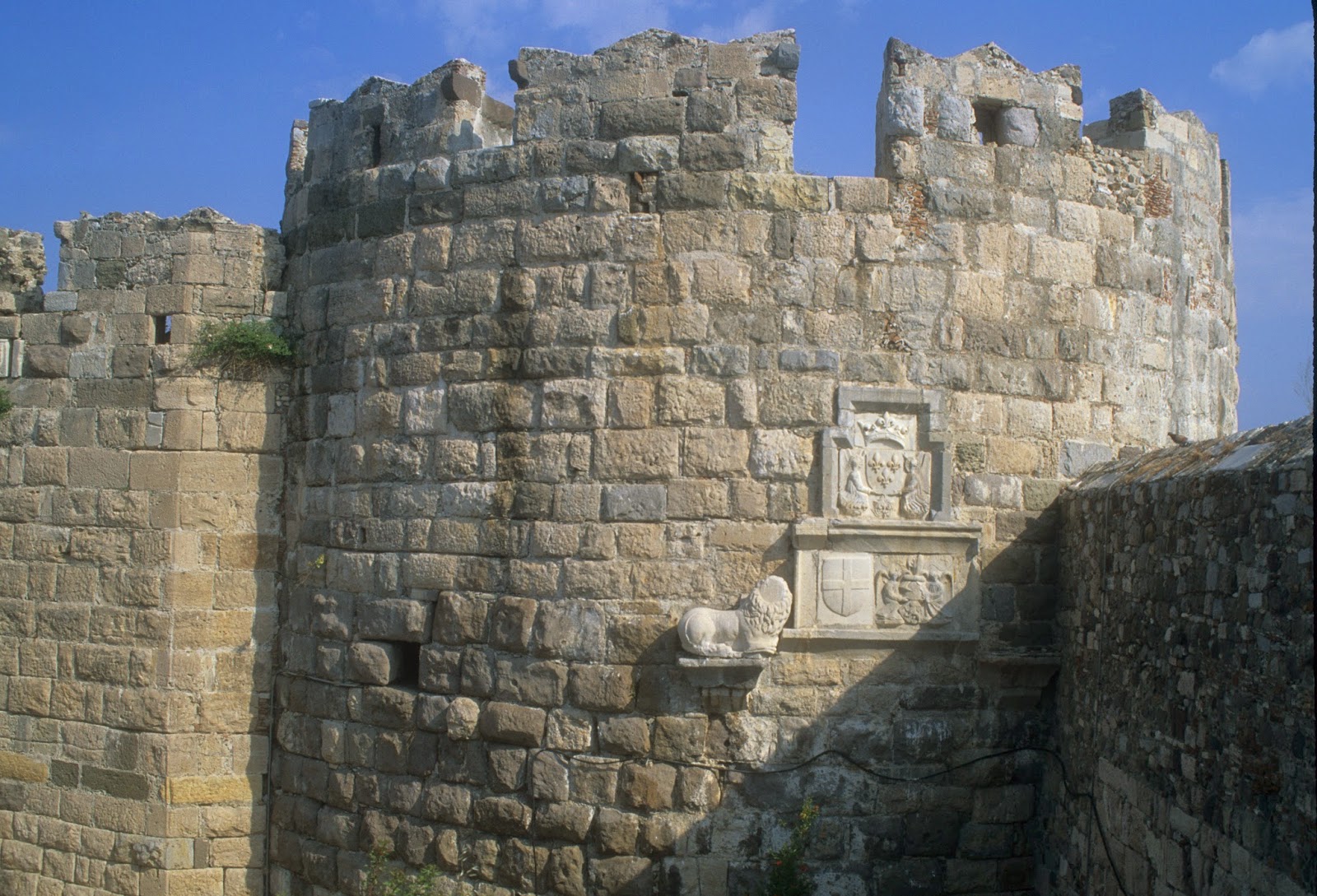 The design of the outer enciente is adapted to the technological challenges produced by new era of gunpowder artillery.  The walls are low and very thick designed to withstand bombardment and in each of the four corners are massive bastions, or platforms for playing the defensive artillery. 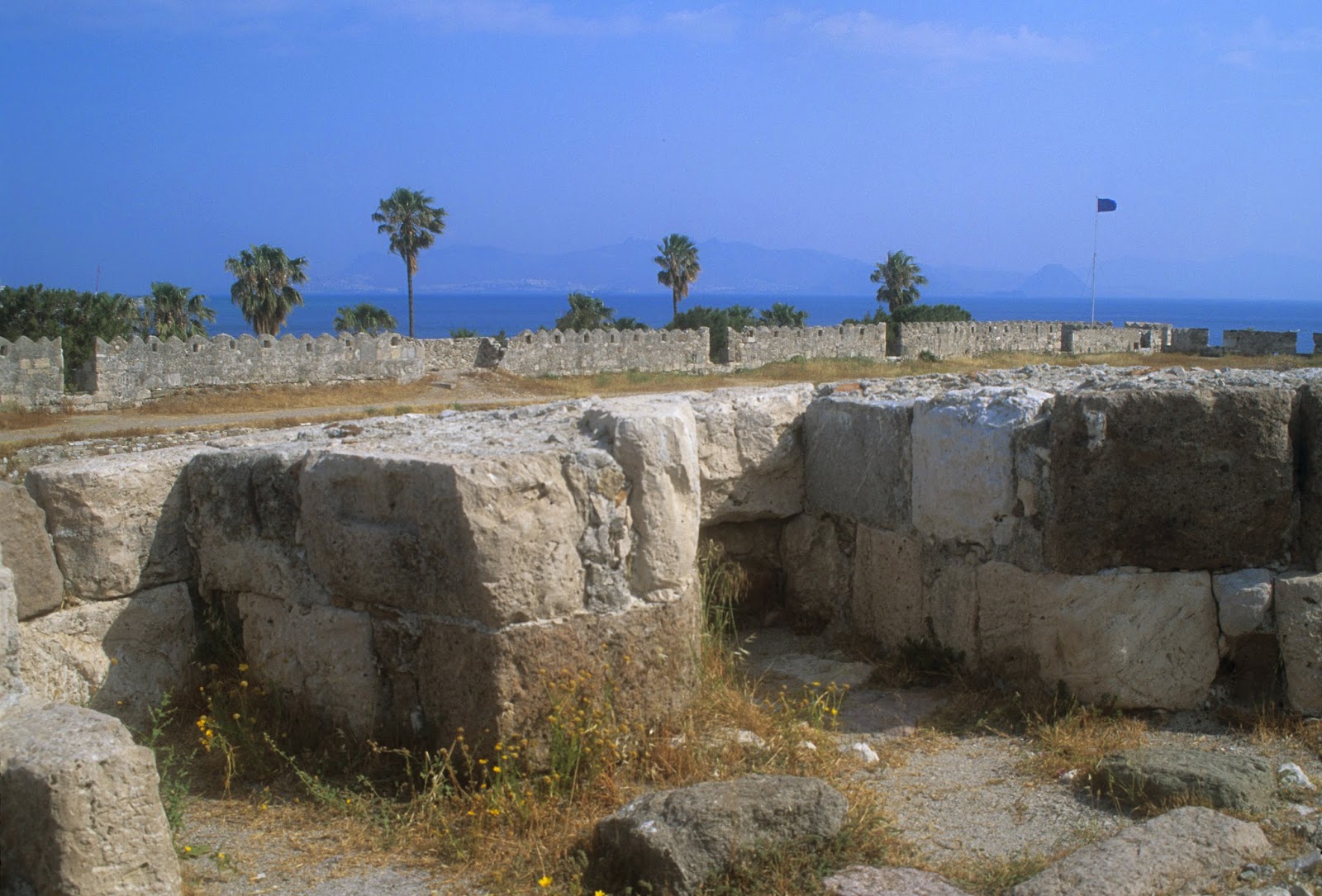 Before the outer enciente had been completed in 1506 seven Egyptian flutes , extremely fast long narrow galleys with large sails attacked Lango. A pair were sent ahead as scouts, but two of the Order's galleys appeared from behind a promontory, cutting them off, whereupon, the Mamelukes beached their vessels and fled inland. The brethren put a crew aboard the flutes, and managed to lure the other Egyptian vessels into a bay where the remainder of the Order's galleys lay in wait, and all the flutes were captured and their crews sold into slavery.

The Bailiff of Lango was supposed to maintain a garrison of twenty-five Hospitallers, ten Latin men-at-arms, one hundred Turcopoles, a doctor, an apothecary and adequate medical supplies. The Bailiff was also expected to maintain a galley with twenty six oars, fully manned and equipped, ready to sail as part of the Order's battle fleet. With the division of the brethren at the Convent into national langues the administration of Lango became the prerogative of the Langue of Provence in whose charge it remained until 1356. In that year the monopoly was abolished and its government thrown open to the whole Order. Every knight who went out to Rhodes to serve had to spend a year on Lango, or provide a proxy in his stead as part of his accumulation of seniority, vital for his eligibility for promotion.

Although Lango was not on a major sea route, shipping did sometimes pass by and the island was on the route from Constaninople to Alexandria. The strategic value of the island lay in its favorable position from which the Hospitallers could control the neighbouring islands. The island also provided a forward base from which the Order could mount forays against the mainland. The Hospitallers used a system of fire and smoke signals which allowed them to communicate news of enemy sightings from Lango to Rhodes and in the other direction. Lango is a fertile island that produced grain, wine, olive oil and fruit in abundance. This produce made a great difference during the famine of 1347 when it was exported to Rhodes.


In June 1522 as the Emperor Sulieman began the siege of Rhodes he also sent troops to besiege Lango and the fortress of St. Peter (Bodrum), to prevent them form sending reinforcements to Rhodes. At the end of December 1522 the Knights were forced to capitulate and withdrew from all their outlying castles and they left Lango for the last time in January 1523.