In 1306 the Order of St. John had by the conquest of the island of Rhodes secured  de facto independent status. The sovereignty of the Hospitaller state was in theory only limited by their subjection to the pope. In reality the independent power of the Order was compromised by its dependence on the manpower and resources  transferred to Rhodes from its properties scattered across the countries of Western Europe.

The Order was constantly obliged to justify its continued possession of these properties and associated incomes , after the fall of Acre and the loss of the Holy Land, its raison d'etre. One of the best ways it could do this was by the 'appearance' of continued a military offensive against the 'enemy'. In effect the Order was vulnerable to pressure, from the papacy, to take the fight to the Turks.The Hospital's possession of their castle at Smyrna fulfilled these expectations. In 1390 Pope Clement VI granted indulgences worth 3000 florins a year at a time when the Order's debts were 38 500 florins, due to the breakdown in discipline following the Schism in the Church. This valuable revenue stream was threatened when Tamerlane captured Smyrna and the Hospitallers were left without an outpost on the Muslim held mainland.

In 1407-08 the Hospitallers began work on a major new castle on the mainland, at Bodrum, opposite the island of Lango (Cos). By giving the new castle the same dedication to St. Peter of the Freed, the Order showed that it was intended as the replacement for Smyrna. Bodrum whose strategic importance was negligible was conceived as a propaganda and fund raising project. With Smyrna lost it was proof that the Order was still engaged in warfare against the Turks, by retaining another foothold on the mainland. The Castle of St. Peter also offered valuable publicity by claiming that it was refuge for Christian slaves escaping from Turkish rule, a point emphasized by travellers in their accounts of the dogs which had been specially trained to act as guides for escaping Christians. As a propaganda exercise the castle of St. Peter was highly successful, attracting tax exemptions, financial contributions and papal indulgences which would probably not have been forthcoming if they had been solicited for the defence of Rhodes alone. 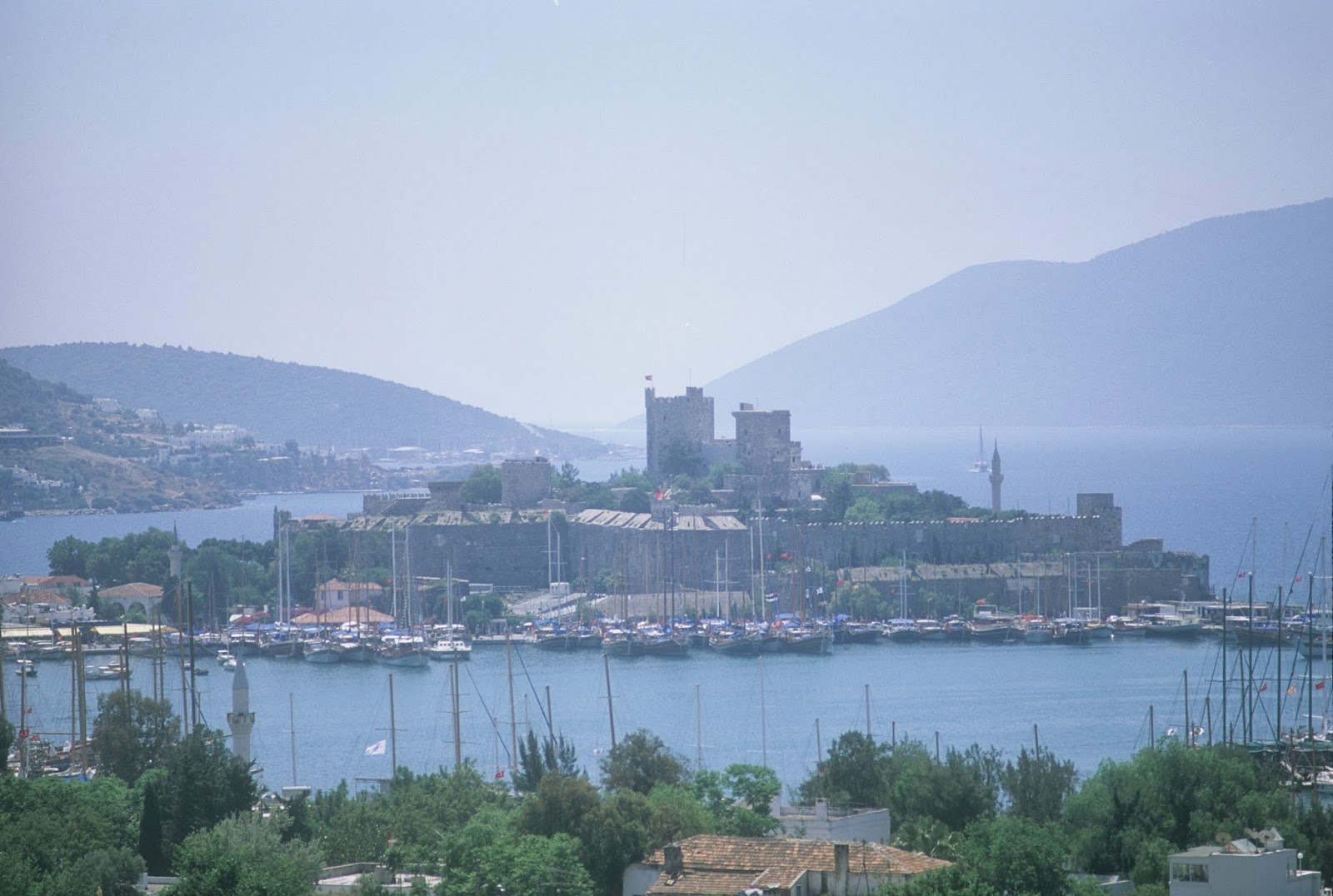 The site chosen for the Castle of St. Peter was a waterless, uninhabited peninsula; there was no question of depriving the Muslim's of a port or valuable trading centre. Bodrum's distance from any population centre was no doubt calculated to reduce the threat of an attack, and its position opposite Lango meant that the castle could be readily supported and resupplied. Master Fra' Philibert de Naillac, founder of the castle made an inspection of the progress on 17th March 1408 when it is recorded that he signed an official document there.

The rocky peninsula was a naturally defensive site, surrounded by the sea on three sides and only connected to the mainland on the north. The castle is almost square in plan, fortified by double curtain walls, except on the eastern side. As the Order was a naval power, confident of repulsing attacks from the sea, the main defences of the castle were concentrated on the land front. The earliest phase of construction at St Peter's, the inner castle, was largely completed during the magistry of of the founder, Fra' Phillibert de Naillac (1396-1421). This consisted of an outer wall incorporating three strong towers surrounding two strong towers in the middle of the enciente at the highest point of the castle. 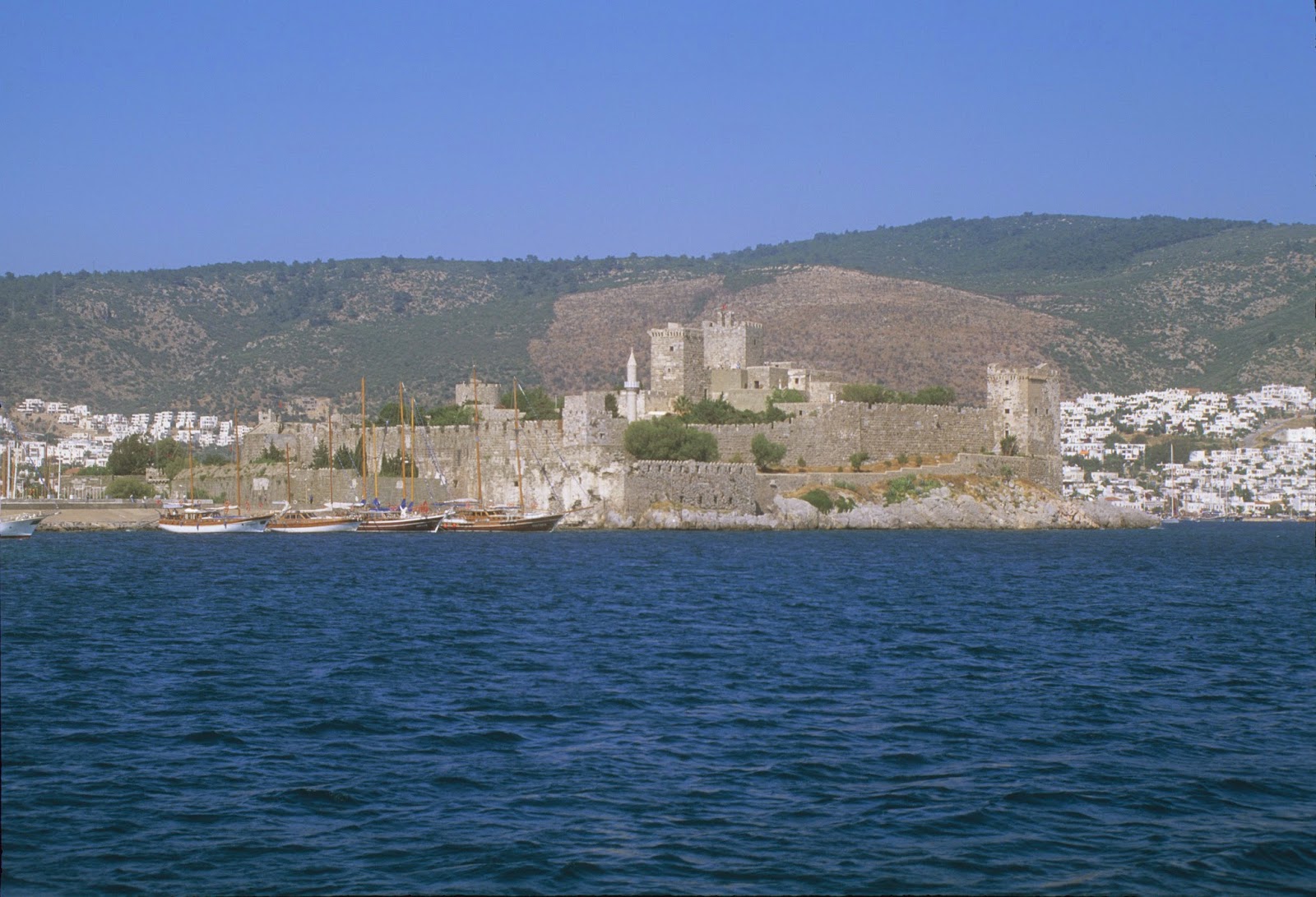 One of the oldest parts of the castle was the garrison chapel built in the Gothic style between 1402-1437 and later restored by the Spanish knights in 1519. All the material used in the construction of the chapel came from recylced ruins of Hellestenic buildings nearby, which unknown to the Knights was the site of Halicarnassus, and the green stone blocks from the Mausoleum, one of the wonders of the ancient World, have been identified in the fabric of the castle. The ready supply of building materials may well have influenced the decision to build the castle at Bodrum.

One of the oldest towers is the round Snake Tower, named after the carving to the left of the entrance that indicates this tower was used as a hospital. Above the entrance on the first floor are the arms of the Order flanked by those of Master de Naillac and the German engineer Fra' Heinrich Schelegeholtz. The German Tower nearby is also part of the earliest construction work and like the Snake Tower was incorporated into the curtain wall. Several of the towers at the castle were named after the nations that sponsored their construction. Just as the Order of St. John was a microcosm of Europe so was the garrison of this castle and most of the Langues at the Convent built a tower named for their own nation within the fortress. 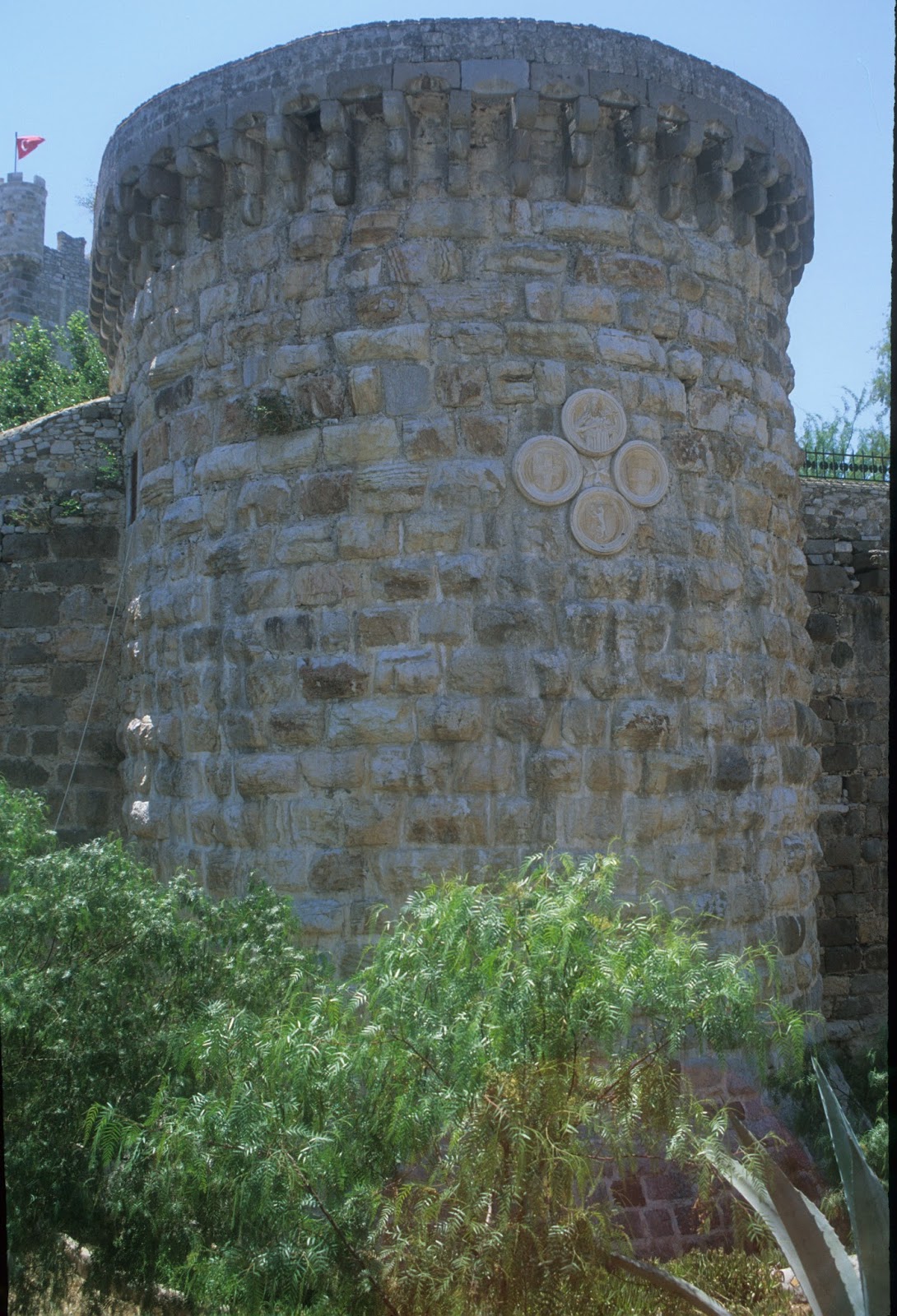 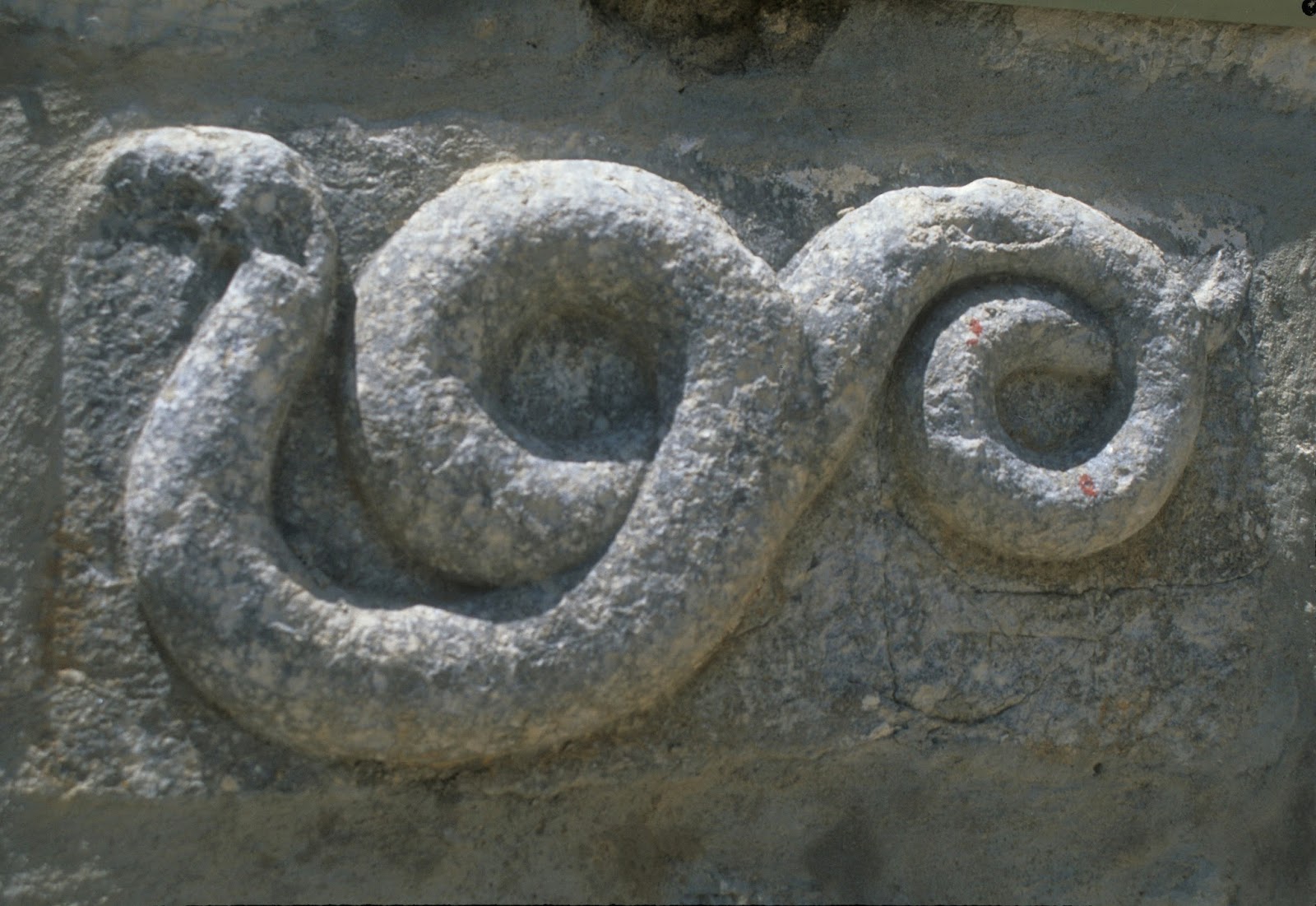 An indication of the prestige inspired by the Castle of St. Peter can be inferred by the number of coat-of-arms incorporated into the fabric of the fortress, placed there to record the contributions of the great and the good towards the defence of this, the remotest outpost of Christendom in the East, built on the shores of the 'infidel'.In all there are two hundred and forty nine coat-of arms on the castle walls and votive figures such as the Virgin and Child, St. Peter holding the broken wheel and St. Catherine facing a figure of St. Mary Magdalene holding a bell and also several inscriptions in Greek and Latin.

Above the main entrance to the English Tower in the south-eastern corner of the castle are the arms of King Henry IV of England (1399-1413) with above them the helmet, cap of dignity, lion and baldragin and with smaller shields on either side of the arms of the Order and other members of the royal family who were among the most generous benefactors of the tower. Work had begun on this tower during the reign of Henry IV under the supervision of an English Knight Fra' Peter Holt. The tower is a three storey building with two entrances. the main entrance on the northern side opens into a large  hall that occupies the whole floor and was probably used as a refectory. The second entrance is outside the curtain wall, by the waters edge and leads into two interconnected dungeons. 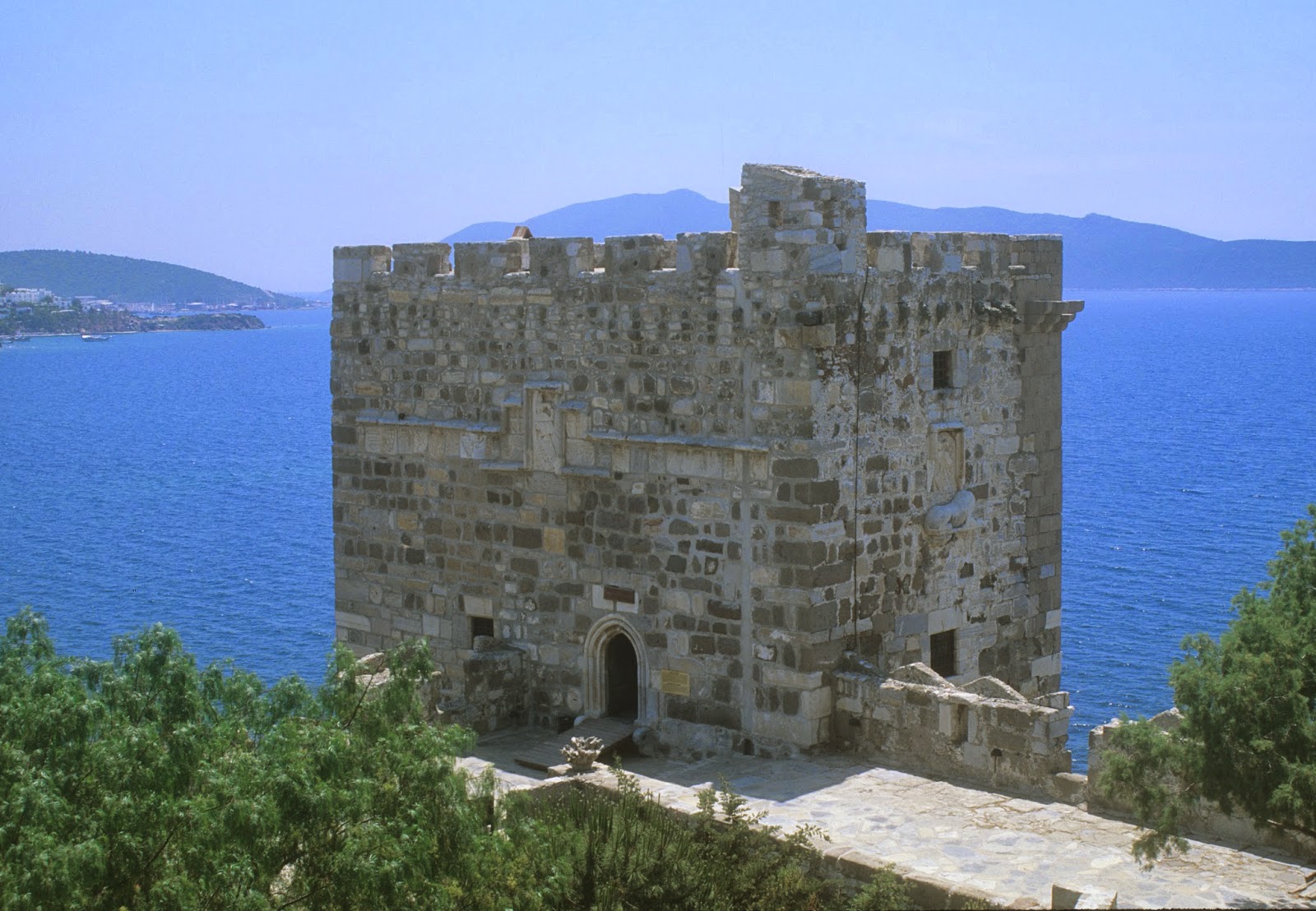 At the highest point of the castle, in the middle of the enciente are the two towers which together served as the keep or inner stronghold. The taller of the towers is the French Tower built between 1427-1431 and to the West, the Italian Tower completed in 1436. The arms of Fra' Angelo Muscetola appear several times on this tower, he was the first known captain of the castle. The Order usually appointed a Knight to the captaincy of St. Peters for a period of two years. The building with a cross vaulted ceiling that connects the two towers was added in 1518. 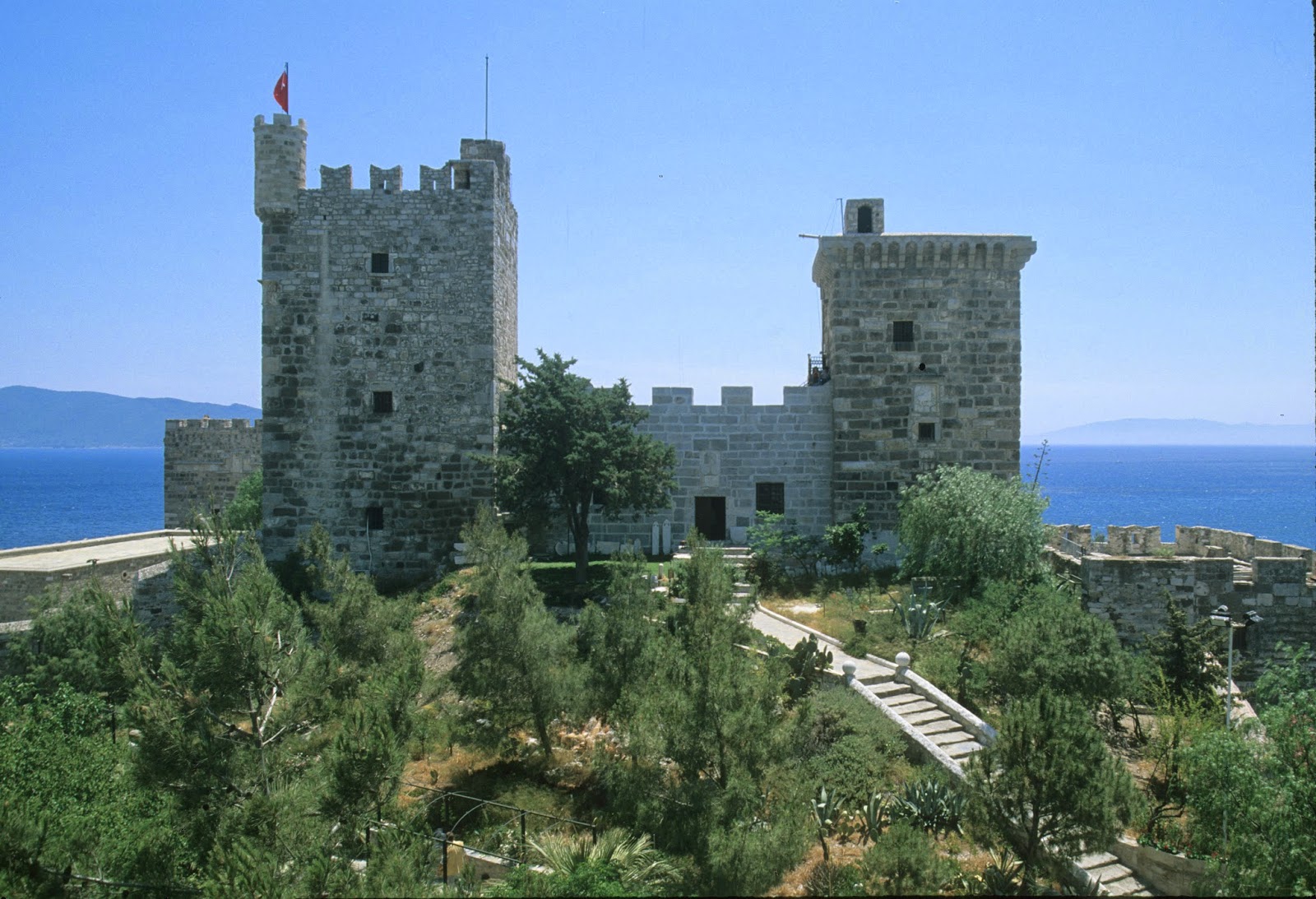 Once the inner castle had been completed the Hospitallers continued from time to time to augment its defences. However the castle was not a major irritant to the Turks and nor was it intended to be. The idea as far as the Turks were concerned was to maintain as low a profile as possible; the bravado and belligerent posturing was strictly for the Western audience. Indeed on 14th December 1409 the Captain was ordered to remain strictly on the defensive inside the castle and to desist from the provocative and dangerous practice of skirmishing with the Turks. The restraint that the Hospitallers were expected to show on land were however abandoned at sea and the Order used St. Peter as a forward base for its 'piratical' activities. Early in 1412 the galieta armed by the men of the garrison was able to seize a Turkish galieta at Lesbos because the peace with the Turks held good only on land.

It was in the aftermath of the First Siege of Rhodes that the defences of the castle were considerably strengthened, in response to the growing danger from the introduction of gunpowder. Because St. Peter was built on rising rock, the walls could not be lowered to reduce their vulnerability to canon fire, but they were strengthened with gun ports and interior covered passages. The inner castle was enclosed within an outer curtain wall on three sides and heavy gunpowder defences which contrast with the medieval walls. On the northern side is a strong tower named after Grand Master del Caretto (1513-1521) and in the east corner is the tower named after Fra' Jacques de Gatineau, captain of St. Peter (1512-1514).At the bottom of this tower is a dungeon reached by a long light of steps with an inscription above the entrance that reads 'Inde Deus Abest', ' God does not exist in this place' and where iron manacles are still fixed into the walls.

Once the castle had been strengthened entry into the castle was by passing through a sequence of seven well defended gates. facing the country, carved into the lintel above the outermost gate is an inscription in Greek which carries the warning that anyone who spied on the castle would be punished. on the inside of the gate are the arms of Fra' Jacques Gatineau, of the Order and Master de Balnchefort (1512-13) above the inscription "Faith, in the name of the Catholic Church shall be defended by Gatineau here." Next a drawbridge leads across the moat to a stone ramp. Through the second gate and across a small courtyard the third gate leads to the bottom of the western moat. The forth gate leads from the moat through a vaulted staircase and onto an open ramp rising along the inside of the curtain wall. A stone bridge leads across the moat to the fifth gate and a small courtyard. An inscription above the sixth gate reads in Latin "Lord, protect us in our sleep, save us when awake. Without your protection, nobody can protect us." Finally the royal arms of France adorn the Gothic gateway that leads at last into the inner castle. 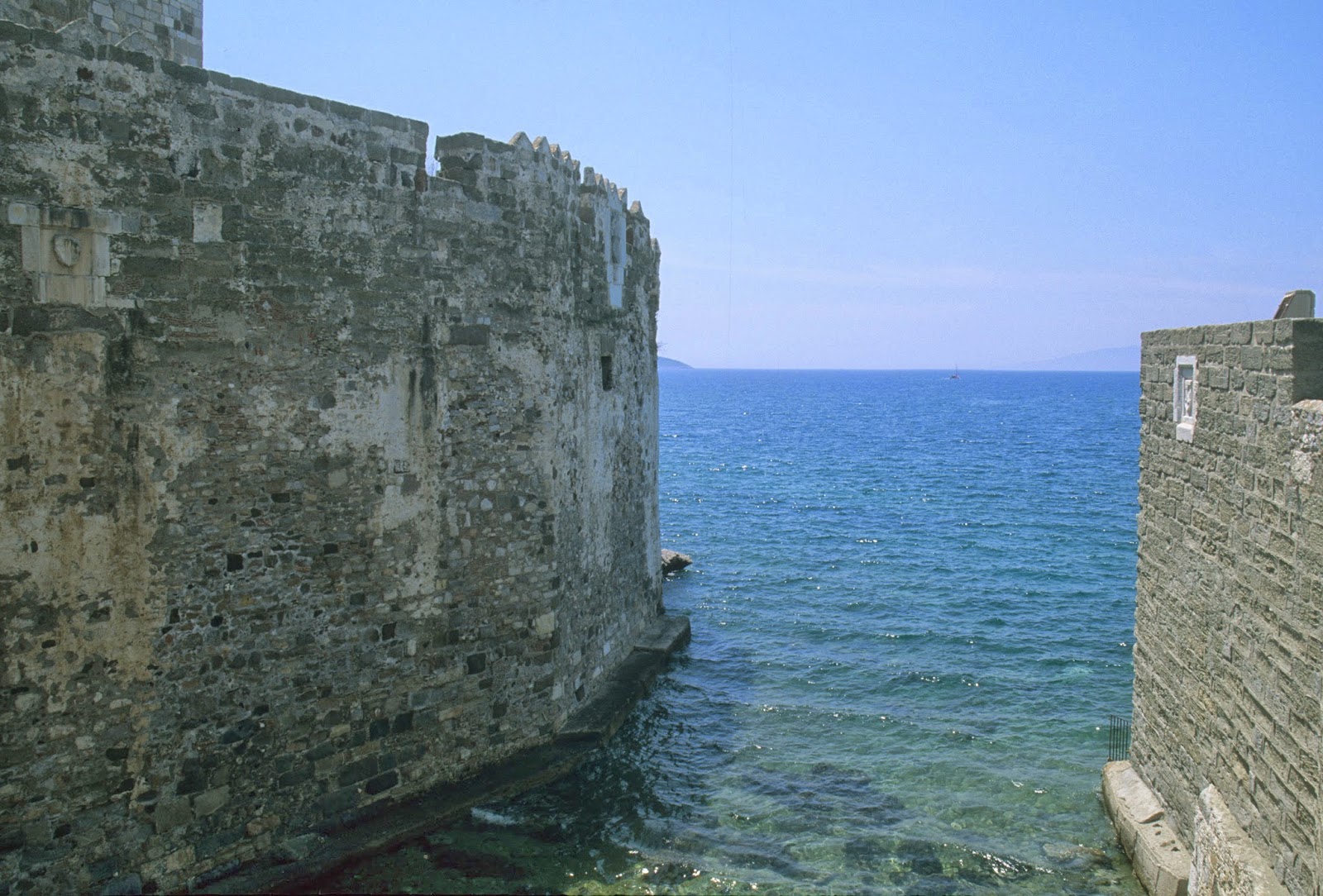 During the Final Siege of Rhodes the castle was defended under the captaincy of Fra' Bernadino de Airasca and considerable reinforcements of men and munitions were sent from Bodrum to Rhodes. When the Master surrendered and left Rhodes on 1st January 1523 he sent instructions to the captain and garrison of St. Peter to abandon the castle and they arrived in Candia (Crete) in the middle of January