The commandery of Halston in Shropshire was founded between 1165 and 1187 when Roger de Powis, lord of Whittington granted the hospital part of his demesne. The grant was later confirmed in a charter given to the Hospitallers by King John. An early gift to Halston was the Hospital of Oswestry which was transferred to the Order in 1217-18. The commandery also owned the church of Kinnerley which came into their ownership before 1248.

Following the conquest of Wales by the Edward I, the commandery of Dogynwal (Yspytty Ifan in Denbighshire) was joined to Halston, by 1294. Halston  then became the administrative centre for all the Hospitaller estates in North Wales. It also included property in the neighbouring lordship of Ellesmere which included the church and its parochial rights which had been granted to the Order by Llewellyn the Great sometime before 1225.

A fascinating insight into life on the Commandery of Halston was given by the report of Prior de Thame into the state of the Order in 1338. In charge was the commander, Fra' Phillipe de Lude and his colleague, Fra' Alban de Nevill both of whom were serving brothers and full members of  the Order. As was the usual practice the management of the estates and the administration of its courts was in the hands of a professional seneschal. The running of the household was the responsibility of a chamberlain. Both these officers were in receipt of a salary paid in addition to their maintenance.

The household staff also included a porter, a baker, two pages, a cook and his assistant, and the commander's two servants. There were  two farm bailiffs whose job was to supervise the serfs working in the fields. Two chaplains also lived at Halston, one who looked after the commandery chapel and the other who ministered at the chapel of the Whittington Castle. Both had their board at the high table and were each in receipt of a salary of £2. A retired priest also had his board and lodging, by virtue of holding a corrody at Halston. There were also the two clerks whose job it was to collect the frary. who  resided at Halston. One seventh of the annual income of the commandery at Halston came from these frary collections made in neighbouring churches from voluntary contributions from the faithful.

The only building at Halston which dates from the era of Order of St. John is the commandery chapel. The timber framed building is now the private chapel belonging to Halston Hall. It is one of only two timber framed ecclesiastical buildings in Shropshire and never became a parish church. The chapel now stands in splendid isolation, surrounded by ancient yew trees in the parkland to the south of the mansion. 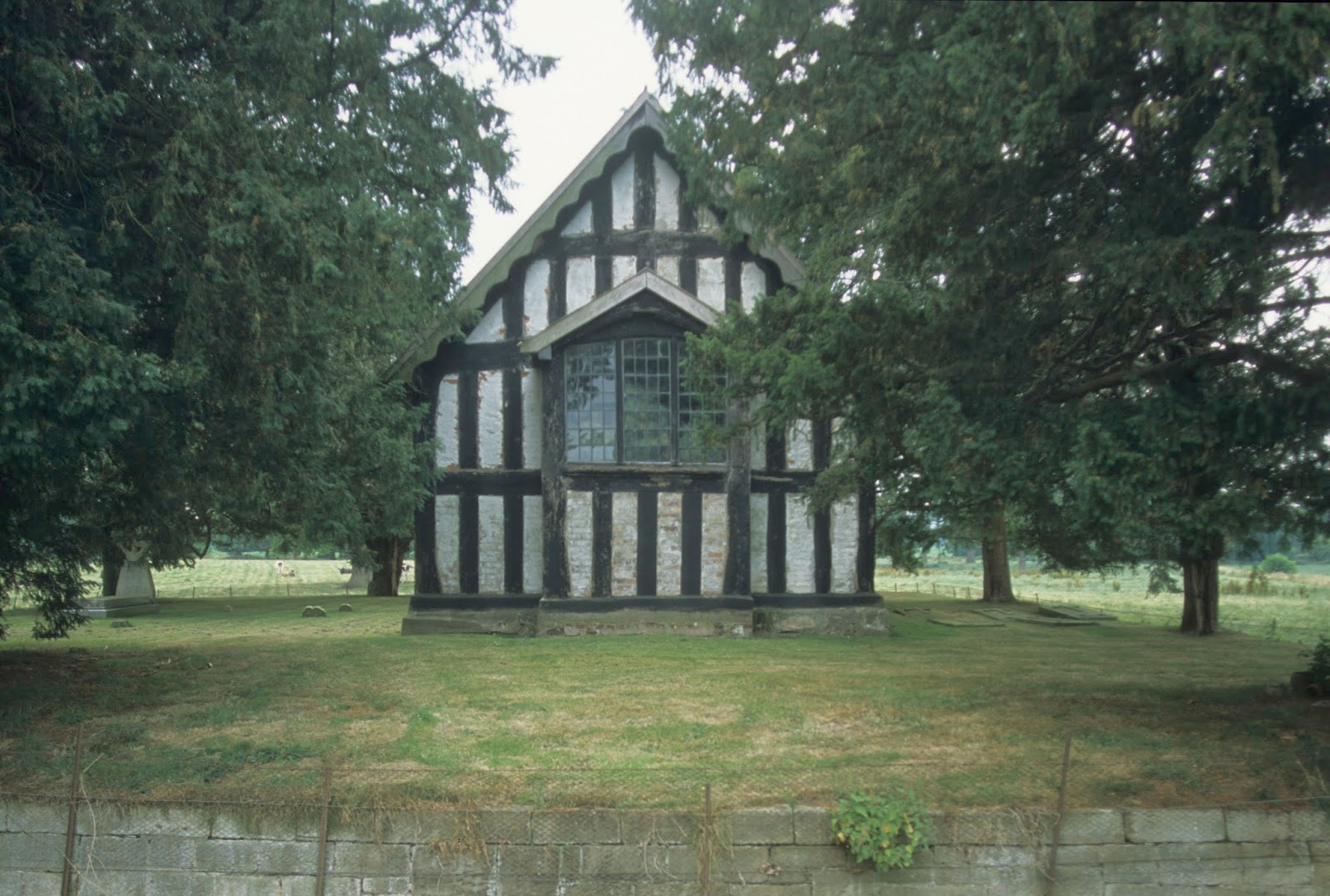 The pattern of the timber framing is close studding divided by a mid-rail. At the east end a framed chancel forms a rectangular extension. The corner posts of the chancel and the east end of the main body of the chapel have beautiful jeweled feet.  The side windows have moulded window frames and mullions with ogee mouldings matching those on the rafters. At the west end, the entrance to the chapel is through an added on brick tower. 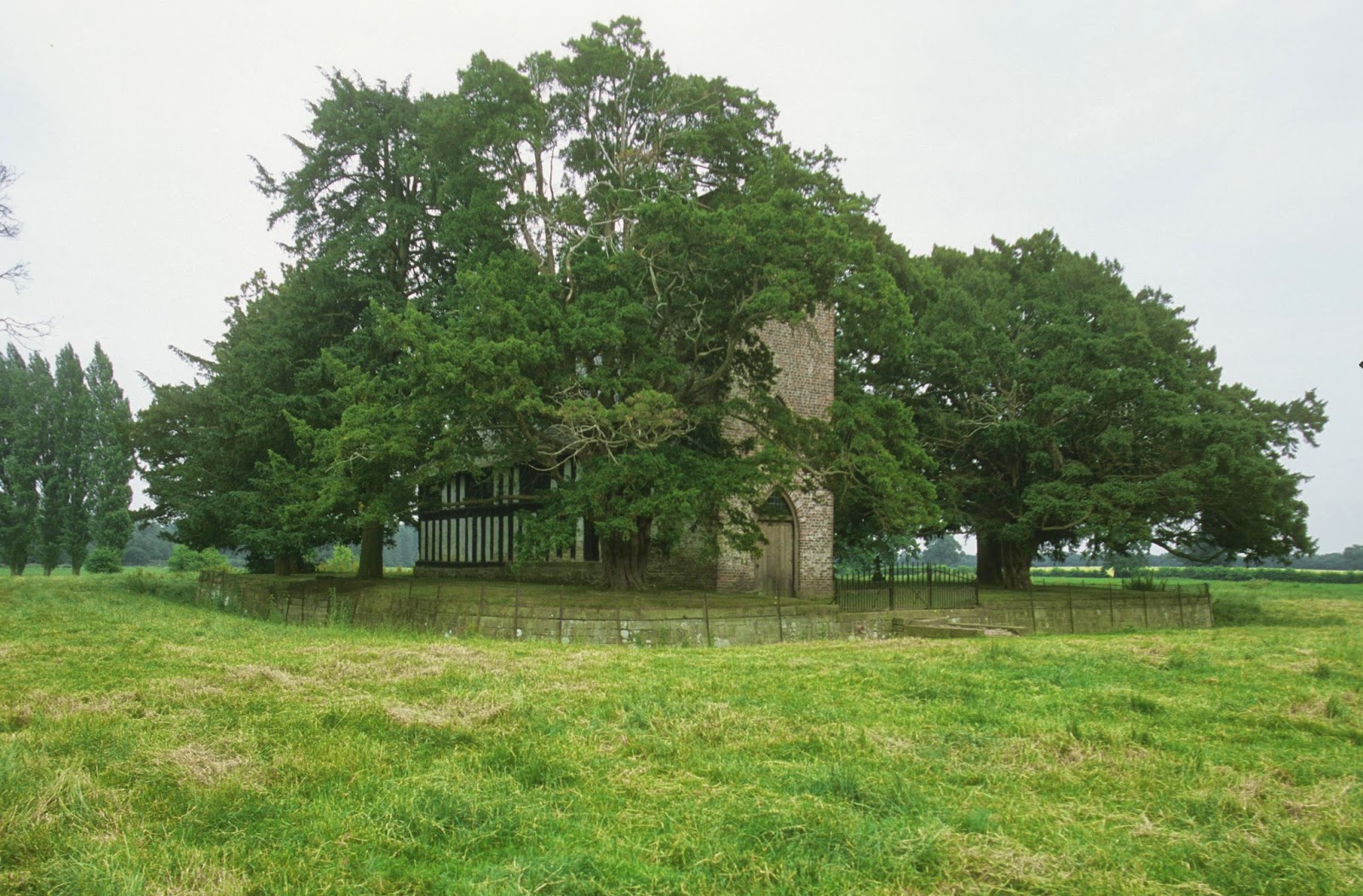 The chapel was refitted in the 18th century with  wonderful carvings in the  interior. However the original roof was covered over but was retained; it has three main trusses each of tie-and-collar beam construction with v-struts. These timbers have been carbon dated to a felling in the winter of 1437-8. Halston Chapel is one of the least visited and most atmospheric monuments of the Order of St. John left in England. 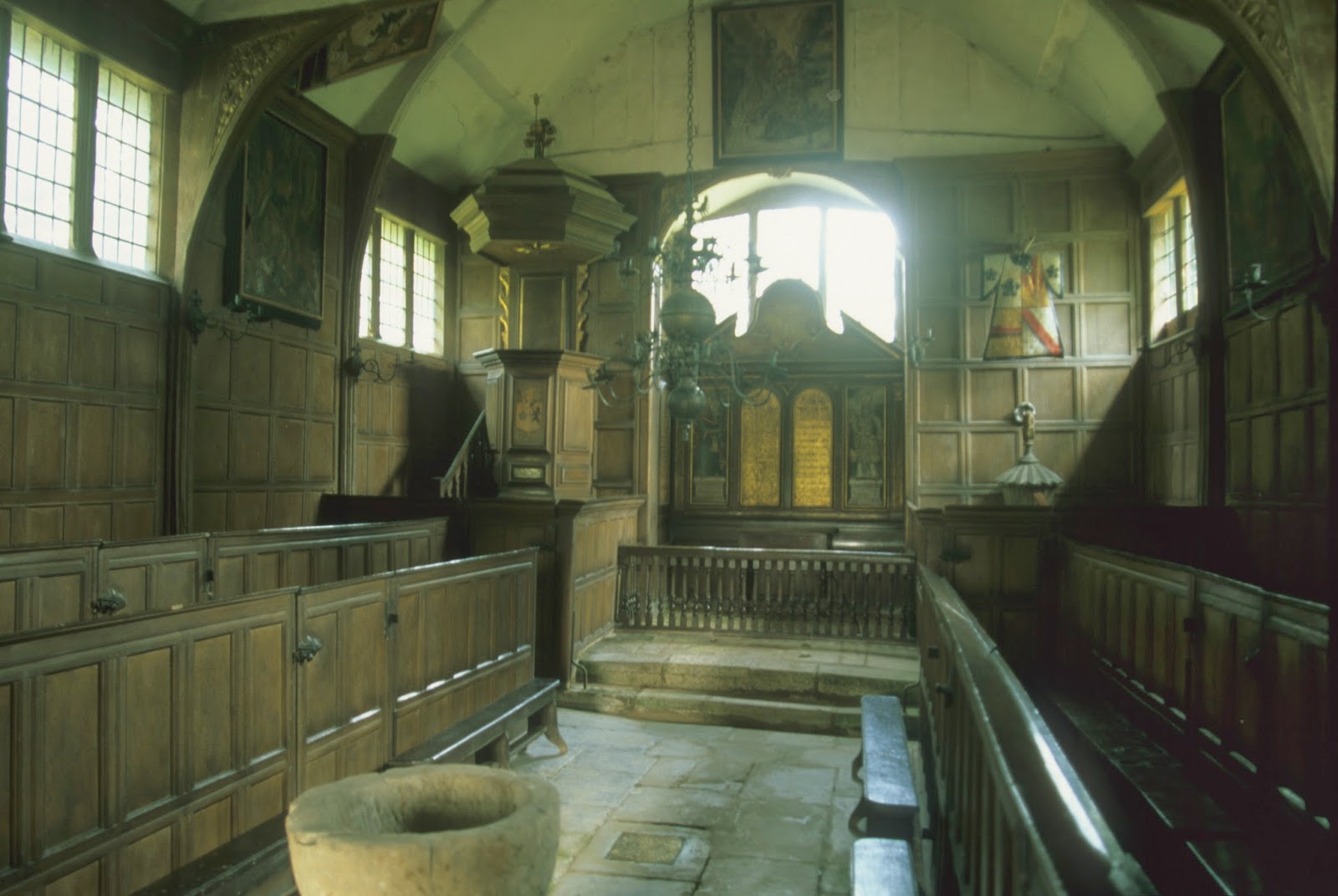