There may have been a few donations to the Order of St. John in Navarre before Alfonso I, el Ballator, king of Aragon and Navarre gave the Hospital his palace of Sanguesa, and properties at Sos and Uncastello in 1131. In his will of  the same year, Alfonso famously left his kingdom in equal shares to the Order of St. John, the Order of the Temple and the Church of the Holy Sepulchre in Jerusalem. Even though neither of the military orders had  fought by then in the Reconquista, it seems that Alfonso, who had spent 30 years fighting the Moors, believed they would defend the kingdom and  take the fight to the Moors. But at his death in 1134, the barons  rejected the will and chose instead Garcia Ramirez to be king. Perhaps to partly compensate the Hospital for its loss, Garcia Ramirez and his successor Sancho VI granted the Order further privileges and property. With the death of Alfonso, Navarre ceased to play any further part in the Reconquista.

A second commandery was set up by the Hospital  at Cizur Menor in the foothills of the Pyrenees near Pamplona. The Priory of Navarre itself was established there c1185. The Romanesque priory church at Cizur Menor, dedicated to St. Michael the Archangel dates from this period. By 1189 a further 10 commanderies had been added to the priory. The Hospitallers were the only military order with significant landed property in Navarre and the Prior was ranked as one of the four prelates of the kingdom, along with two bishops and the prior of Roncesvalles. 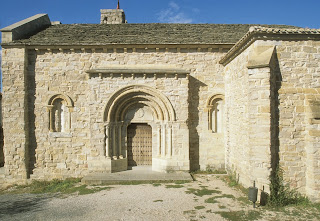 The marriage of the queen of Navarre to Philip the Fair of France in 1284 brought Navarre into the Provencal sphere of influence and from 1297 it was Provencal knights who were appointed as priors of Navarre. From 1314 Hospitallers serving at the convent in Rhodes belonged to the Langue of Provence. Only when Charles II came to the throne in 1350 was the kingdom reoriented  towards Spain and in 1358, the Priory of Navarre was restored to the Langue of Spain.

During the 14th and 15th centuries the priors of  Navarre managed ,most of the time ,to maintain close relations with the monarchy. The prior of the Hospital was a member of the royal council and an important and influential member of the court in the reigns of both Charles II and Charles III. The Hospitallers contributed troops to Charles II's wars. During the reign of King John II and his wife Queen Blanca, the prior of the Hospital, Fra. Jean of Beaumont was appointed guardian of Charles, prince of Viana and chancellor of the kingdom. He had position in the prince's household and a seat in the Navarrese parliament.

However there were serious breaches of these good relations. One of these occurred when Prior Jean of Beaumont sided with the prince of Viana is his rebellion against his father King John II which began in 1451. The king  confiscated all the Hospital's properties, which were only restored after the tenuous truce brought about by the Concord of Barcelona that ended the conflict in 1460.

However when John II arrested his son, the prince of Viana later the same year, the Beaumont family resumed their armed struggle. And as the prior aligned himself with Henry IV of Castille in his war against John II all the Order's properties in Navarre were confiscated again. It was only in 1564 when the prior  realigned himself with the king that the Hospital's property in Navarre were restored. A new revolt by the Beaumont family in 1471 brought yet another confiscation, this time of four of their commanderies, though the king did not prevent the payment of their responsions to the convent at Rhodes.

The price paid by the Hospital of their close proximity to royal power was increasing interference in the Order's internal affairs by the monarchy, a trend that was to become all to common elsewhere.

The  prioral church at Cizur Menor now belongs  to the Sovereign Military Order of Malta who have established a hostel for pilgrims following the Camino to Santiago de Compostella that is open from July to September. 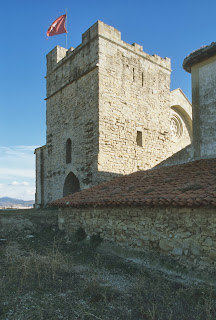