In 1158  Count Raymond Beranger, King of Aragon and Count of Barcelona, as guardian of his young nephew Raymond Berenger II, Viscount of Millau  gave the village of Sainte Eulalie and the surrounding territory , the limestone plateau of the Larzac, to the Order of the Temple. After the suppression of the Templars, Sainte Eulalie became the property of the Order of St John in 1312 and was the most valuable legacy of the Templars to the Priory of Saint-Gilles. From 1312 until 1792 Saint Eulalie was one of the Order of St. John's richest commanderies, if not the richest in the south of France
. 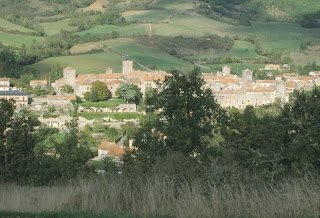 However the prosperity was interupted as a result of the disasters of the late 14th Century. First, the Hundred Years War devastated the lands to the west of the Rhone. At first Provence managed to remain relatively unscathed but the papal schism of 1378 led to its own six year war of succession. Then from their possessions in Gascony the English were able to devastate wide areas of southern France during the 14th and 15th Centuries. The English even captured Sainte Eulalie in 1385 and stayed until at least 1389. To better protect their possessions the Order of St John  threw up 30' high defensive walls around the Commandery of Sainte Eulalie and the villages  of La Cavalrie and La Couvertoirade, the "Ramparts of Larzac." between 1442-1450, on the orders of Commander Fra.Bertrand d'Aapajon. 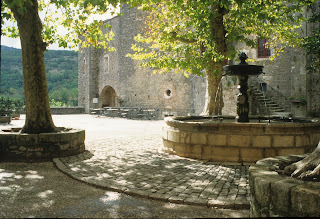 The oldest building at Sainte Eulalie is the church, which dates from the beginning of the Templar occupation in the 12th Century. However Commander Fra. Jean de Bernay Villeneuve decided to reverse the orientation of the church in 1642. He removed the cemetery and laid out the fountain square in its place opening a new entrance to the church in the existing apse, with a statue of the Virgin and child from Genoa placed over the door. Now the faithful could enter the church without having to pass through the courtyard of the commandery. 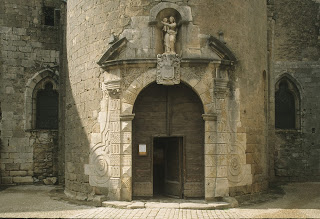 Another building dating from the Templar occupation is the tower in the north-west of the village, the Tower of Quarante.This was where grain was stored and where taxes and kind were collected, 1/40th of the harvest. In return the peasantry could take refuge inside.

At the heart of Sainte Eulalie is the "Palace", the residence of the commander and the resident brethren. The original, austere Templar building was rebuilt by the Hospitallers in the middle of the 14th Century. In the 17th Century commander Fra. Jean Bernay Villeneuve as part of his improvements  reorganized the building by inserting extra floor into the great hall. The first floor known as the "upper palace" was the dormitory. Fireplaces were installed in each of the new rooms.The main room in the "lower palace" was used as the refectory and chapter room. 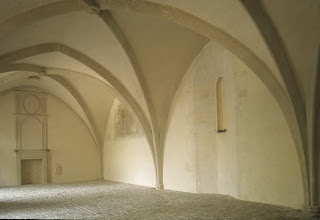 The loveliest room in the palace is the frescoe room, a combined corridor and ante chamber completely painted with frescoes on the theme of the virtues. The work was done in 1648 at a considerable cost of 200 livres. 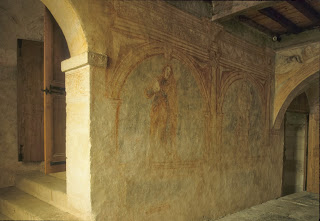 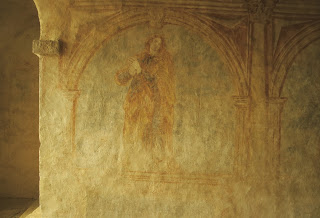 A small room in the round bartizan tower has interesting graffiti depicting 17th and 18th century churches which may well be based on some unfortunate confined person's memories of Malta. 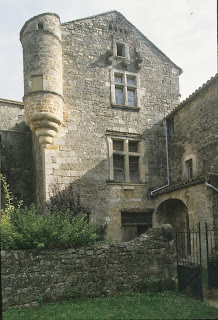 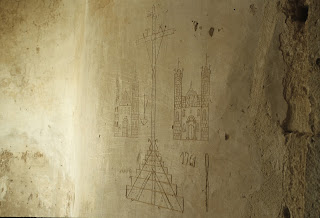 The capuchin's room was fitted out c1730 and has a door constructed from reused floorboards. 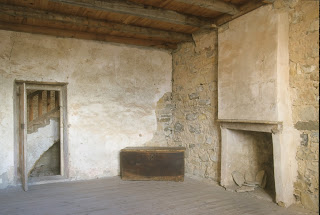 The size of the Hospitaller community living at Sainte Eulalie fluctuated over the centuries. There were five brethren after the fall of Acre. But in later years it seems to have been just two, the commander himself and one other.

Beside the brethren, also living at Sainte Eulalie were the chaplains in charge of the church and the "donats" lay people who had contributed to the Order and in return were accommodated and looked after by them. There were officials including the cellerer who had the functions of a steward and the keeper of the bedchamber among others. Finally there were the servants, the shepheards, oxherds, grooms woodsmen, porters, cooks, bakers, brewers and agricultural labourers. A census of 1373 records 29 people living there including two women. The house also fed eight poor folk throughout the year. 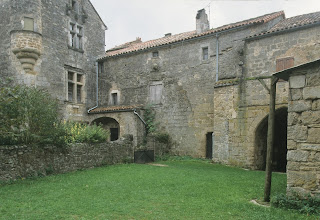 Commander be Bernay Villeneuve also created a new entrance to the commandery, from fountain square where a vaulted passage gave access to the staircase and the upper floors and to the courtyard. The courtyard was fortified, until the ramparts were built in the mid 15th Century it was the only protected place in the village. The original entrance to the commandery is on the south side. Arranged around the courtyard are various service buildings, stabling for horses, mules and oxen, workshops, a sheep house and a poultry yard, with accommodation for the servants who looked after them. 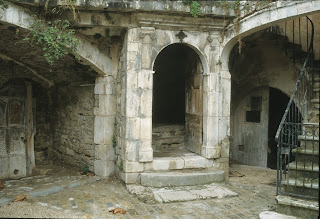 Above the arch next to the south tower of the palace is the study of the last commander of Sainte Eulalie, Fra. Elzear de Riqueti-Mirabeau (1768-1789), uncle of the grand tribune revolutionary. After the Revolution all the escutcheons were removed from the buildings of Sainte Eulalie as outdated symbols of nobility and the ancien regime, but in most other respects this former commandery of the Templars and the Hospitallers is little changed. 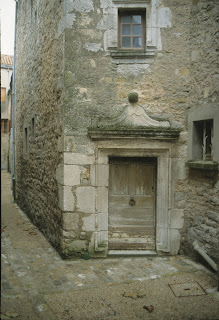