The Manoel Theatre in Valletta, begun in 1731 is one of the oldest theatres in Europe. It was named after the Grand Master who built it, Fra. Antonio Manoel de Vilhena. Before it was built plays and theatrical productions were usually held in the great halls of the various Auberges. The new theatre followed the plan of the theatre at Palermo and was erected "for the honest recreation of the people." The Grand Master appointed as "Protector" of the theatre, a Knight to supervise its management. The theatre was formally inaugurated on 19th January, 1732, with a performance of Merope by Maffei.

At first productions were staged by the various Langues, but Grand Master Pinto introduced a professional company, after, it is said, repeated protests from the Inquisitor over pages and novices taking the soprano roles. The theatre became a centre of Malta's social life. The Master of the king's Chapel at Naples dedicated a number of musical dramas to the grand-masters and in the course of the 18th century a number operas by Galuppi, Paisello, Cimarosa and Pergolisi were staged.

The theatre was also used for dances when the pit was raised by scaffolding to the level of the stage. While from the outside the theatre is almost inconspicuous on the inside it is a charming and intimate space with three floors of boxes in open galleries, flanking the five boxes of the top floor, each box painted with delightful landscapes, cornucopias of flowers and other motifs. 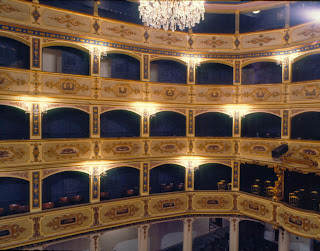