The Wignacourt Tower that stands on the southern shore of St Paul's Bay was the first  coastal tower to be built by the Knights of St John.. It was the first of a number of towers built at the beginning of the 17th century by Grand Master Fra' Alof de Wignacourt to guard vulnerable landing places.

On 7th November 1609 plans and a model of the projected tower were presented to the Order's Council. The proposal was accepted and the grand master himself attended a ceremony on 10th February 1610 at which the foundation stone was blessed and laid. The chosen date is supposed to have been the anniversary of the shipwreck of St Paul. The coast of the tower, 6748 scudi, 7 tari and 10 grani was borne by the Grand Master. 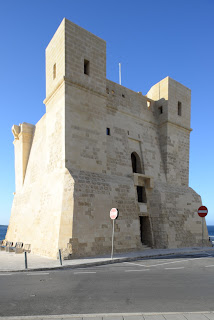 The design of the tower seems to have been by the Maltese architect Vittorio Cassar.  Square in plan, it had a single stone-vaulted room on the ground floor and another above. The flat roof mounted a canon and could be used for lighting a bonfire and signalling at night. Four corner towers rise higher than the roof. The original entrance on the first floor was approached over a drawbridge from a flight of stone steps. These were removed in the 1950's when the road was widened. The ground floor entrance is a modern addition.

The tower was armed by two 6 pounder and three 18 pounder guns. There were also piombatoi or drop boxes projecting from the corners of the towers from which objects could be dropped onto an attacker. As a result this and other contemporary towers were known as 'towers of boiling water.' 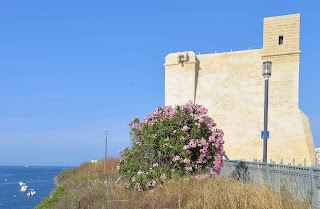 The Wignacourt Tower soon saw action when in 1614 it prevented an Ottoman fleet from landing at St Paul's Bay. As a result the grand master was authorized on 9th July to post up to 30 foreign troops at the tower. The tower was placed under the command of a master bombardier who received an annual salary of 74 scudi. He was also provided with oil to light the room in which eight local men kept watch, without pay. In 1631 the normal complement of the tower was settled at two bombardiers in addition to the commander, but in an emergency the Order was prepared to augment the garrison.
Posted by Jimmy Graham at 13:30