Fort St Lucian was built in 1610 by Grand Master Fra' Alof de Wignacourt. This powerful rectangular fort was intended to defend the great unprotected bay of Marsaxlokk in the south of Malta where the Turks had landed in 1565. The fort was named after the church where Wignacourt was christened.

A legend reports how a female slave from Tunisia, on being converted to Christianity, confessed to a Jesuit priest that St John the Baptist appeared to her, warning her of an imminent threat and advising of the construction of a fort at Marsaxlokk. the grand master was told but was too busy building his aqueduct to take much notice. However the following summer eight Turkish galleys attempted to land in the bay but were prevented by the coastguard convinced the grand master to build the fort at a cost of 11,745 scudi.

Fort St Lucian was completed by 11 June 1611 when a bronze canon was installed. It is a strong square tower built on a promontory with four bastions, one at each corner. The walls are twenty three feet thick at the base surrounding two barreled vaulted chambers with two more on the upper storey from which extend six splayed embrasures in the sixteen foot thick walls. 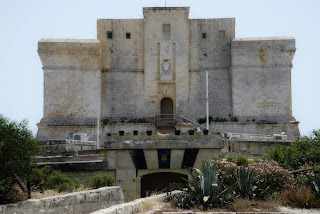 In 1722 the fort was garrisoned by thirty men and armed with six cannons. A battery was built on the seaward side and equipped with eight cannons. In 1761 French engineers reported that it, 'is very solid, vaulted to perfection and on a platform holds five cannon of 10 pounds and two of six pounds with two little mortars.' 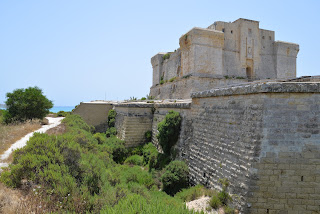 In 1793 Grand Master Rohan had a ditch excavated around the fort to further strengthen its defences, his escutcheon was carved over the entrance and it was  named Fort Rohan in his honour.
Posted by Jimmy Graham at 05:57