The Church of St. James the Apostle in Merchants Street (formerly Strada San Giacomo or St. James Street) Valletta was the conventual church of the Langue of Portugal, Castile and Leon. The first church dedicated to St.James was a much more modest structure built in the early days of the city. One hundred years later in 1710, the Church of St.James was rebuilt in the latest Baroque style, the first in Malta to be influenced by Bernini's work in Rome. The architect was Romano Carapecchia who had joined the Order as an architect and water engineer, St. James was his first building. The cost of the building was met by the Priory of Castile, by Cardinal d'Arias and other generous benefactors. 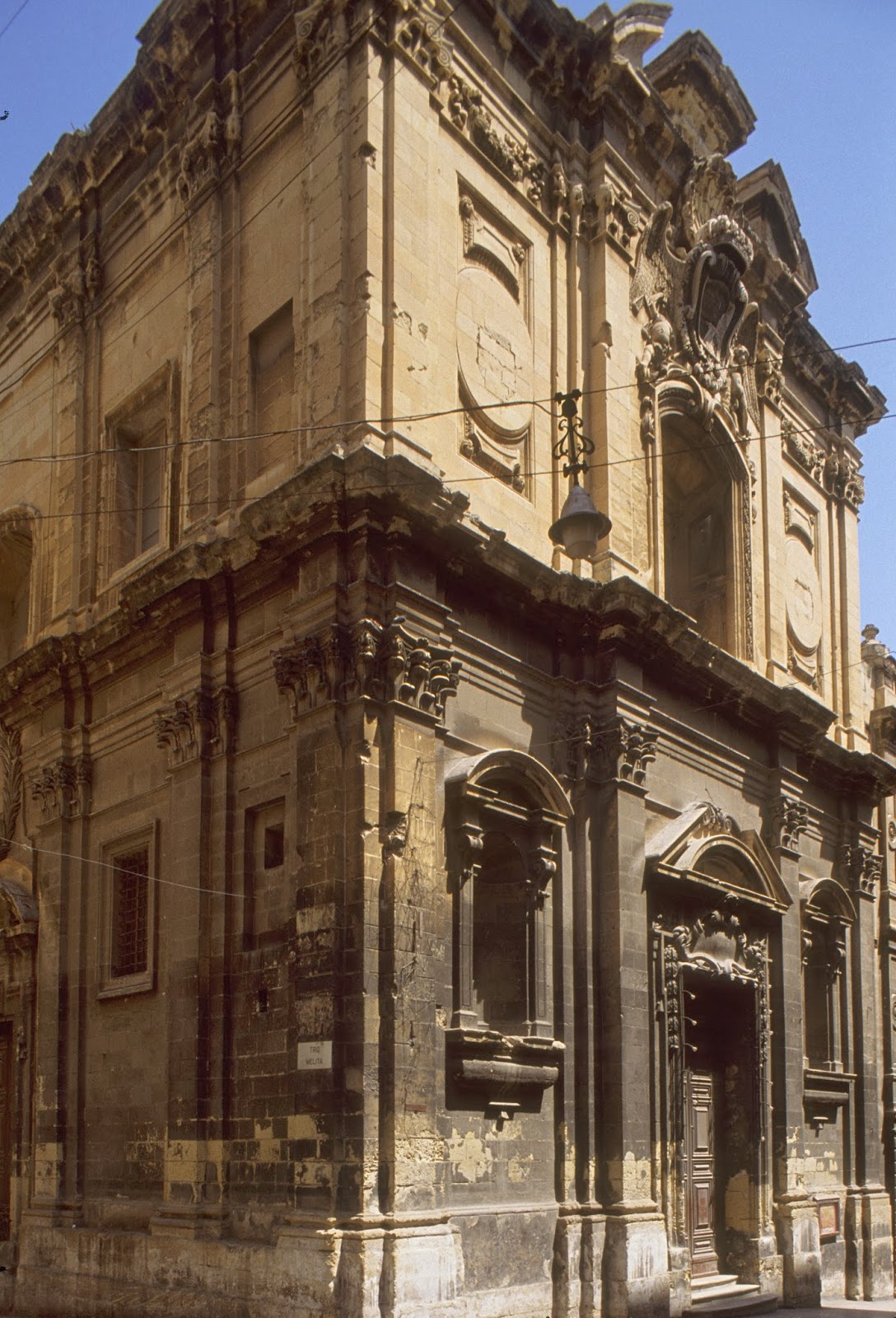 The facade has two stories, and though richly carved, the stone follows the restraint of the Roman example rather than the overblown style found in Spain and Sicily. The doors, windows and niches produce a dramatic chiaroscuro effect in the bright Mediterranean sun.  A magnificent cartouche over the central window frames a coat of arms. The church is crowned by an unusual elliptical cupola. Inside, the altar is notable for its dramatic width and height and it has a painting of St. James by Arcangela Paldini (1599-1622) as its centerpiece. A niche under the painting contains a 'miraculous' image of the Madonna of Soledad brought to Malta by a Spanish member of the Order.

When it was finished the Prior of the Conventual Church of St.John's placed St. James into the care of a secular priest of the Maltese Diocese who acted as Sacristan and he was provided with accommodation nearby. Another priest, a Conventual Chaplain was appointed as the Church's Beneficiary.

The festivities by which Langue of Portugal, Castile and Leon honoured the Feast Day of their patron began on the eve of the feast when after prayers were offered in St.John's. Then the Grand Master, with the Knight's Grand Cross and other Palace officials processed to St. James. A service was held there assisted by two Conventual Chaplains of the Langue and the congregation was often said to spill out onto Merchants Street.

On the morning of the Feast Day, July 25th, at about 8am, the Grand Master, accompanied by his retinue of Grand Crosses and the Palace entourage, processed with all the accustomed pomp and pageantry to St. James.  A solemn Choral High Mass was celebrated as on the eve, by the Beneficiary and the Conventual Chaplains of the Langue. At the conclusion of the High Mass a procession led by the Vice- Prior of the Conventual Church left St. John's with Ostensory and Relic of St.James. A motet was sung in praise of the saint before the procession returned through the streets to St.John's with the Relic, followed by the grand Master and attendant dignitaries.

At St. John's the Prior of the Church then entered wearing the pontifical robes surrounded by his assistants and the Antiphon of the Feast was chanted. The Relic was then censed and the ritual prayer of the Saint was intoned by the Prior who then placed the Relic on the High Altar. The pontifical ceremony of the Feast then got under way in the presence of the Grand Master and the assembled Knights.