The splendid parish church of St Saviour, Lija was designed in 1694 by the Maltese architect Giovanni Barbara. That it was completed in only six years is evidence of the prosperity of the Maltese derived in great part from the proceeds of the Corso. Giovanni Barbara was born c 1670 in Lija and became famous both in Malta and abroad as a military engineer. st Saviour was one of his first important commissions, and it is by Maltese standards and by his own later work, a simple design. 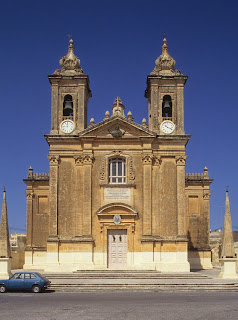 St Saviour's tall character is accentuated by the western towers which flank the facade. A facade that employs the Corinthian order, while inside Barbara used the Doric order. The dome is relatively small, rising behind the parapet of the tall drum. 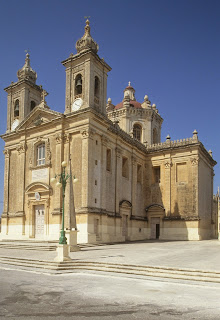 St Saviour now stands in a state of somewhat splendid isolation in the middle of Lija after the surrounding houses were demolished.
Posted by Jimmy Graham at 11:48